(Editor’s note: This article has been updated to clarify  the defendant’s bond and the status of his case.)

A Los Lunas man is facing charges out of Washington state after he allegedly abducted a 13-year-old girl and brought her to his home in Valencia County. 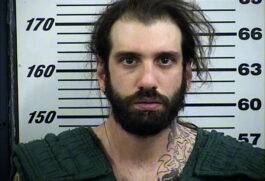 On Wednesday, Dec. 22, Lucas Murphy, 35, was charged with first-degree kidnapping with an aggravating circumstance allegation (sexual motivation), attempted second-degree rape of a child and communication with a minor for immoral purposes via electronic communications, in the Superior Court of Benton County in Washington state.

Murphy was booked into the Valencia County Detention Center, where he is awaiting extradition back to Washington.

It was initially reported by the News-Bulletin that Valencia County Magistrate Miles Tafoya set a $1 million cash only bond, but he clarified on Monday that the bond was set by a Washington judge.

“I don’t want to take credit for something done by another judge,” Tafoya said. “He set the million cash-only bond. What I did was hold the extradition hearing. Since the warrant was served here in New Mexico, any time we have an out-of-state warrant, there’s an extradition hearing. I did the hearing, which makes sure the person is who the warrant says it is.”

Tafoya explained if a defendant fights an extradition attempt, the matter goes to district court. In this case, Murphy waived extradition. If extradition is requested by a neighboring state, authorities have 10 days to pick up a defendant or 14 days for states further away, Tafoya said.

“Since he waived extradition, he’s still in custody and there will be a status hearing,” the judge said. “If (the requesting state) is in communication and say they need more time, we will keep him. If there is no communication, I would be forced to release him.

“In this case there were multiple agencies involved, a warrant was issues, so I’m sure there’s communication. (Murphy) is on a no-bond hold here. There’s no bond, no amount of money that will get you out if another state wants you.”

Murphy is scheduled to go before Judge Tafoya for a status hearing at 10 a.m., Thursday, Jan. 20, at the Los Lunas Magistrate Court building.

The Valencia County Sheriff’s Office was contacted on Dec. 22 by the Kennewick (Wash.) Police Department about the non-custodial abduction of a 13-year-old girl.

The teenager, who is from Montana, was visiting friends in Kennewick, Wash., for the holidays. Officers indicated the girl, who had been missing for about 72 hours, and Murphy were in Los Lunas.

According court documents, Murphy picked up the girl in Washington on or about Thursday, Dec. 18.

Washington investigators discovered Murphy had been in contact with the girl through social media for about six months before the abduction, VCSO Lt. Joseph Rowland wrote in a recent press release. The teenager voluntarily left the state with Murphy to come back to New Mexico, Washington law enforcement reported.

VCSO detectives, along with agents from the FBI Albuquerque field office, proceeded to Murphy’s home on the 1300 block of Don Pasqual in Los Lunas on Dec. 22.

When officers attempted to make contact at the front door, they heard people inside the home but they refused to answer. Forced entry was made into the home, where Murphy and the girl were found in a locked room together. Murphy surrendered a short time later.

The girl was cleared by medical personnel with no injuries and released to her parents once they arrived to New Mexico from Montana.

The FBI’s crimes against children unit has now opened a federal case in the matter.