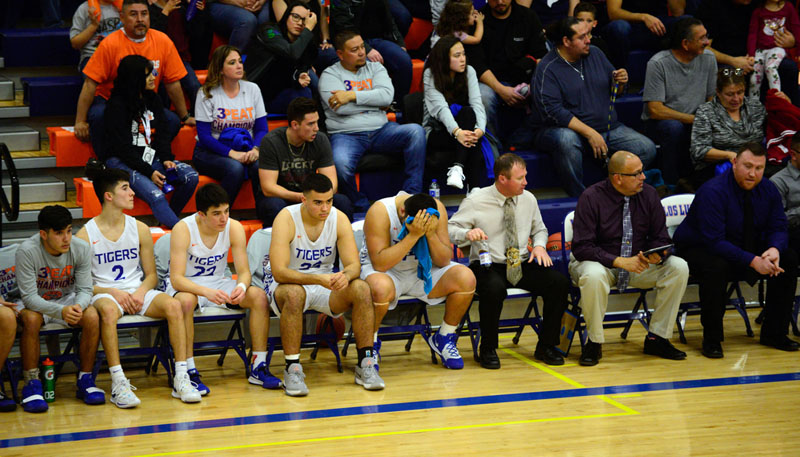 There will be no return to the Pit for the Los Lunas boys basketball team this year. The Tigers were upset by No. 11 seeded Del Norte, 36-28 on Saturday night at LLHS.

Los Lunas got off to a slow start offensively and was never able to recover.

In the first half, Los Lunas was only able to muster nine points.

The Tiger defense was doing its job, however, and keeping them in the game by allowing 15 first half points to the visiting Knights, who brought an impressive contingent of fans with them and helped to fill the gym.

Out of the break, Del Norte put together a 5-1 run to stretch the lead to double digits for the first time at 20-10.

This forced Los Lunas coach Travis Julian into a timeout with just over five minutes left in the third.

The timeout was enough to spur the Tigers into their best offensive stretch of the game, which saw them close to 22-18 at the end of the third.

The Tigers continued to chip away and were able to briefly retake the lead, 23-22, with about five minutes left to play in the game, forcing a timeout from the Knights.

Out of the timeout, DNHS put themselves back on top and pushed the lead to 28-23 over the next couple of minutes and forced the Tigers to take a timeout of their own.

Throughout the entire game, the pace was slow and limited the number of possessions for each side.

The Tigers attempted to get back into the lead via the three pointer, but were not hitting at nearly the rate necessary to give themselves the lead back, which was a theme throughout the game as shots that often fall for them wouldn’t go down.

Out of the timeout, the Tigers were able to cut the lead with a three on their first possession and force another timeout from the Knights as the visitors did what they could to prevent LLHS from ever truly building up momentum.

With 2:20 left in the game, the Knights were able to get a firm grip on the lead and didn’t look back. Shots still weren’t falling for Los Lunas, which particularly in the final minute was focused on hitting the quick three.

Del Norte was able to avoid many of the mistakes that often befall teams attempting to break the Tigers defensive pressure and were able to prevent extra possessions that way.

With the Tigers forced to foul, the Knights were able to put the game away at the foul line and secure the 36-28 win and a trip to Dreamstyle Arena on Wednesday.

The Knights took on Highland in the quarterfinals at 11:30 a.m. on Wednesday. LLHS’ season comes to an end with a 17-11 record.

Meanwhile in Taos, the Valencia Jaguars pulled off a minor upset with their defeat of the eighth seeded Taos Tigers, 64-60.

The Jaguars used an 18 point second quarter to gain the separation they needed in order to see out the narrow victory, leading the entire second half, though rarely by a comfortable margin.

With the win, VHS improves to 18-12 on the year and set up a quarterfinals appearance on Wednesday at 3 p.m. in the Pit against the No. 1 seed Valley Vikings.

The Vikings, who defeated Los Lunas in last year’s state championship game, defeated No. 16 Santa Teresa in the first round, 76-40.

The two schools have not met yet this season, but do share a number of common opponents. Valley defeated both Belen and Los Lunas earlier this season by scores of 55-39 and 50-43, respectively.

Atrisco Heritage and Bernalillo are the other two schools that have played both, and the Vikings have a record of 5-0, including two meetings with Bernalillo, against those schools.

Comparatively, the Jaguars record is 3-6, with all three wins coming against Belen. This total includes four meetings against Los Lunas as well as the three with the Eagles.

The game was played on Wednesday, but results were not available before deadline.

Tickets are $15 for reserved chairback seats, $10 for a general admission adult and $5 dollars for students, seniors and military. Parking has an additional cost of $5.

Ticket sales are cash only onsite, but can be purchased in advance online through golobos.com as well.

Should the Jaguars win, they would face off with No. 5 seed Hope Christian Thursday, March 12 at 3 p.m.

The 4A boys championship game is scheduled for 4 p.m. on Saturday at the Pit. 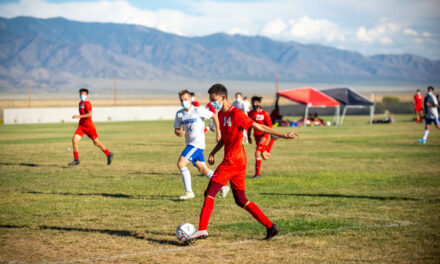 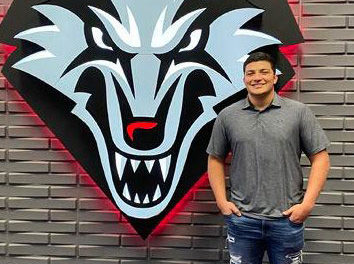 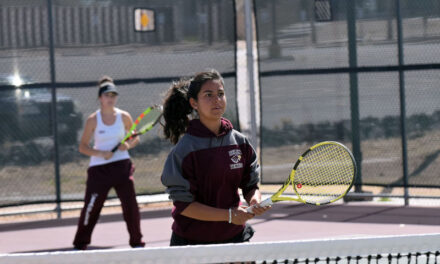