The cadets of the Los Lunas High School Army Junior ROTC Armed Drill Team and I wish to salute and commend the outstanding contributions made to the team by Mr. Chuck Rumschlag and employees at Color Works in Los Lunas.

The team members, during their several competitive events this year in New Mexico and Texas, are now wearing the liners with great pride. Thank you, Mr. Rumschlag, for your noteworthy support of and belief in the children of our community.

Get rid of ‘historic eyesores’

In regard to the letter to the editor dated March 27, “Preserve our history,” I say congratulations to the City of Belen for demolishing the old Aragon Hall, which is older than I am. I was born and raised in Belen and attended Belen Public Schools.

Belen has some more historic eyesores that need to be put on ice. They are buildings left alone, unattended and a target for vandalism.

Regarding the recent News-Bulletin article entitled, “Controversy in the camposanto,” it is important that certain information reported in the article is clarified and that additional concerns be addressed.

To begin, Mr. (Bob) Davey indicated that “it would cost the Valley Improvement Association (VIA) too much to move the plant now, but he is willing to work with the neighbors to lessen their concerns, perhaps by setting up small plants, rather than expanding the present one and moving the ponds. Creating “package plants” or small plants requires individual permits, monitoring and all other administrative environmental regulations by the state. This proposal is, in fact, cost prohibitive. In the long run, the VIA will have to expend large amounts of money to maintain these small plants (so why not spend the money now to relocate?). This option serves no other purpose than to pacify the readership.

Regarding the ponds, it was stated that “the ponds are designed to percolate the water into the aquifer.” I have spoken to several experts who indicate that complete percolation is not feasible by creating evaporative ponds. Additionally, lining the ponds will not prevent seepage because these ponds are at maximum capacity. The current system cannot handle the discharge, and that is why the irrigation system to the Veteran’s Park was established.

The explanation that “geo-technical tests showed the water flows south and west” is really an incredible statement. I don’t know who the engineer was who reported this finding, but I think making this type of statement further exacerbates the discussion by insulting the intelligence of the residents of the area. The juxtaposition of the cemetery and the sewage treatment plant makes it impossible to believe this statement. Water and other things flow downhill!

The entire matter, from the seller’s perspective (VIA), is about money. The matter from the people’s perspective is about human dignity, trust and respect. I say relocate the sewage plant!

Our Girl Scout troops put a notice in the News-Bulletin on March 20 about gathering tattered or worn U.S. flags for an honorable disposal. We performed this ceremony today, and the girls were moved by the reverence and importance of this task.

We received 19 flags in response to that small notice and would like to thank Fidel and Lucy Gabaldon, Ed and Roberta Kubisak, Patty Germain, Brad Francis Automotive Group, the U.S. Air Force, Heather and Joe Schriner, June and Bob Sheehan, Bill Atchison and Moose Lodge 1680 of Belen (along with several anonymous donors) and the News-Bulletin.

This community service project was performed in March to help celebrate the 90th year of Girl Scouting in the U.S.A., but, if you missed this opportunity to have us dispose of your non-usable U.S. flag, you may call Suzanne at 866-6556 to pick it up for a future ceremony.

Both my wife and I grew up in the country; however, we have lived in several cities during the course of our lives, including Albuquerque.

Having experienced both lifestyles, we decided a city was not where we wanted to raise a child. We found five acres of land in southern Casa Colorada, and thought we had found our country home. We have lived here for 15 years and have been raising two children in a community we all love.

Now our neighbors and our family are being threatened by an influx of power plants. There are currently proposals for five in our area. How many more are going to try to come here?

These companies are more than willing to pollute our air, destroy our property values and take our water. Did you know that they can condemn your land and your water rights for their use? And you thought the silvery minnow was a threat!

We must not allow the destruction of our way of life by these huge out-of-state corporations. They will use any tactics to obtain their objectives. Beware of their promises, as they are not to be trusted. One only needs to look at their records in other states where they promised to build small plants that use a minimum of resources. Once they have a small plant built, they build a bigger “addition” to the plant in as little as a year afterwards: a larger plant with greater pollution and even higher water consumption.

Please attend the public hearing on the power plant permit for the proposed Rio Communities plant to be held April 8 at 6 p.m. at the Belen City Hall. Keep your eyes open for announcements on other meetings and hearings, and be sure to attend them. Your presence is needed if we are to preserve our future.

It’s a question of respect

The water is flowing in the ditches (acequias). They are very dangerous to be close to or swim in.

When we were little, a friend and I went swimming in one. There were no free passes to the swimming pool back then. It was way out in the country, with no homes for hundreds of yards. The ditch was full, almost to overflowing.

We were at a wooden bridge; the water was up to the underside of the bridge. We tried to see if we could swim all the way under the bridge.

My friend went first. He let all the air out of his lungs and swam briskly under the bridge and came up way past the bridge.

I did it a different way. I half crawled and stooped, feeling my way along the sides. I ran into what seemed to be two protruding boards. I had to find my way around them.

By this time, I had panicked underwater. No use opening your eyes in muddy water; you cannot see anything.

I ended up at the side where I had started. I had fought the strong current. My friend said he had seen me splashing at the other end and that I had gone back.

What if I had passed out? No CPR classes back then. If I had passed out, how would my friend have gotten me out of the ditch? Help was pretty far away. Besides all that, people break glass bottles in ditches, and a crayfish (crawdad) may bite your big toe!

Are we slipping back?

Several months ago, we had a wake-up call — 9/11. Are we really listening to the urgency of that call, or are we slipping back to our old routines?

What was this call but a call to prayer? In the 19th century, Mark Baker Eddy launched her book, “Science and Health.” The first chapter is titled “Prayer.” One of the first questions is “What are the motives for prayer? Do we pray to make ourselves better, or to benefit those who hear us, to enlighten the infinite or to be heard of men? Are we benefited by prayer? Yes, the desire which goes forth hungering after righteousness is blessed of our Father, and it does not return unto us void.”

We have just received another wake-up call. The news media broadcast that “New Mexico is on fire.”

In her book, Mrs. Eddy gives a definition of fire: “Fear; remorse; lust; hatred; destruction; affliction purifying and elevating man.” Through our prayers, our thoughts and experiences are being purified and elevated, but just a request that God will save us is not all that is required.

Whatever faith perspective we may come from or whatever spirituality means for us, ultimately, we all have to face down evil.

In his recent book, “Faith and the Challenges of Evil” by John O. Stackhouse, he concludes, “What do you think about God and evil? Your life is your answer.”

You can make a difference.

Q: The Major League Baseball season gets started this week. What’s your pre-season pick to win the World Series? 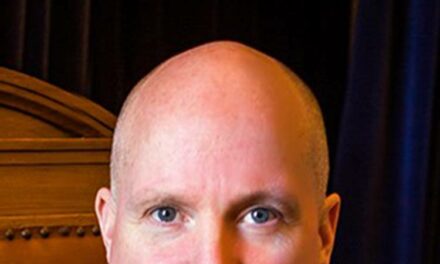 Her letter is in form of cartoon