An elderly Rio Communities man is being sought on charges for allegedly kidnapping and raping a 74-year-old neighbor in her home Wednesday night.

A warrant has been issued for the arrest of 70-year-old Wilbert Leat on charges of criminal sexual penetration and kidnapping. Valencia County Sheriff’s Detective James Purdy said he believes Leat may have left the county and may be in either Arizona or Colorado.

According to Purdy, the alleged rape occurred after the 74-year-old victim let a man into her home at the Vista Del Rio Mobile Home Park Wednesday night.

“He entered the victim’s home under a ruse,” Purdy said. “Once he got into the house, he attacked the victim in the kitchen. She was choked and dragged to the back room, and he proceeded to rape her.”

In the one to two hours the man allegedly held the victim, Purdy said, the 74-year-old woman was bound and gagged.

“He raped her, threatened her and then he left,” the detective said. “She hesitated for a while after she was able to get free. She contemplated what to do because the guy threatened her. Her initial phone calls were to family members, and then she finally decided to call police.”

The woman was taken to an Albuquerque hospital where she was examined and treated for minor injuries to her arms.

Purdy said he believes Leat is on the run, driving a gold-colored 1991 Dodge Caravan with a personalized license plate, K-A-N-D-E-S.

He is described as having brown eyes, standing five-feet-eight-inches tall and weighing 200 pounds. He has grey hair and is balding.

If anyone has information on this case, call Detective James Purdy at 866-2414. 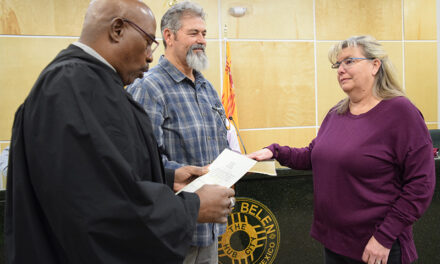