On June 13, 1970, Isidro Montano, son of Ernest and Mela Montano, took the hand of his beautiful bride, Evelyn Gabaldon, daughter of Carlos and Dimetrita Gabaldon, and they promised to love, honor and care for one another for the rest of their lives. 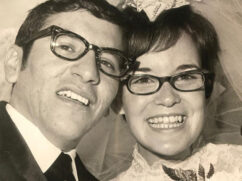 Isidro and Evelyn Montano
On their wedding day

In 2020 they celebrate the love and commitment that has lasted for half a century.

Isidro was off to Vietnam, enlisted in the U.S. Air Force; and Evelyn off to The University of New Mexico to study business. Despite the miles, their love continued to grow, in the slowest fashion possible, hand-written letters.

In a recent picture

On one of his visits home, Isidro purchased a ring, which was then “borrowed” by one of his five sisters, showing it off on her hand, down the halls of Belen High School. But eventually, the ring landed on the hand of an elated Evelyn. On June 13, dressed in a beautiful white gown, the bride, in the arms of her loving father, walked into the arms of Isidro, where she has remained for the past 50 years.

Over the years, they have built a house from homemade adobe, and turned it into a home for their three daughters, and continue to have that same home open for all of the love of their 11 grandchildren.

Isidro is retired from the New Mexico Department of Labor; and Evelyn continues her work as a loving and devoted mom, daughter and wife. Together, they ventured into entrepreneurship, and today they share in their love of “down time” in Ruidoso and spending their time with those who love and adore them. 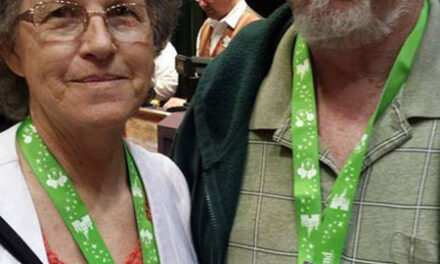 He spent this anniversary alone