The New Mexico chapter of the International Mini Bullriders Association is sending 13 boys between the ages of five and 16 to the world championships in Las Vegas, Nev. next month.

The chapter is new this year and spearheaded by Ruben and Cathy Valenzuela of Belen. The boys come from all over the state to practice at the Valenzuela’s house every other Sunday.

Not only will the boys be heading to Las Vegas, but 18 of the Valenzuela’s bulls will be going as well.

Both Valenzuelas grew up around bulls and rodeo and began owning mini bulls as a hobby about three years ago.

Last year, they had the opportunity to take some of their bulls to the World Finals, which helped spark the interest of their son Lane to begin riding.

At eight-years-old, he is among the youngest of the boys who qualified for the finals and one of three first year riders who will be competing. Valenzuela said his favorite things about bullriding are having fun and getting to have friends all over the country that he met through riding.

Since the chapter is new, this will be the first year that New Mexico riders are able to represent at the World Finals.

The finals will be held from December 5-8 at the Plaza Hotel and Casino. Attending, however, will be expensive, with the cost incurred by each rider estimated at $2,000.

To help offset the costs, the organization has put together a benefit dinner at 6 p.m. on Saturday, Nov. 16, at the Sheriff Posse Cafe in Belen.

The dinner will include an auction, a dance and a cash bar in addition to food. 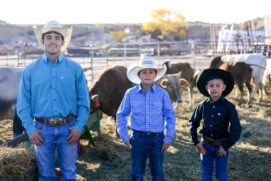 From left, Leonard Montoya, Ruger Wimberly and Lane Valenzuela stand in a bull pen at Valenzuela Bucking Bulls on Monday, Oct. 28. The three boys will be traveling to Las Vegas, Nev. for the IMBA World Finals.
Cameron Goeldner |News-Bulletin photo

Leonard Montoya is the oldest of the group at 16, and has been riding for two years. His passion for the sport was sparked when he attended a rodeo camp and had the opportunity to ride a bull for the first time.

The thing that kept him coming back was the adrenaline rush he gets from riding, as well as the opportunity to represent on a world stage.

Montoya, as well as Travis Wimberly, will also be competing in the Junior World Finals put on by the National Finals Rodeo at the same time.

In order to qualify for the world finals, a participant must have a top five finish in a series of IMBA sanctioned events within their age group.

Tickets for the benefit dinner are $40 for adults and $20 for kids. They can be purchased by contacting one of the riders or visiting facebook.com/valenzuelabuckingbulls.

The event will be televised by RideTV, available through most television providers. 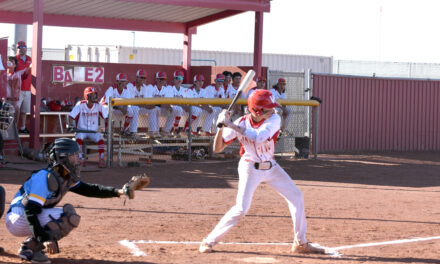