Nice to meet you Valencia County

I guess this is my chance for a formal introduction. My name is Cameron Goeldner and I’m the new sports reporter at the Valencia County-News Bulletin. I’ve only been on the job a week now, so you may not have seen me around yet, but that will soon change.

I grew up surrounded by writing, from my great-grandfather, who ran a weekly paper in Earlham, Iowa, for nearly 40 years, to my grandmother, who taught English classes at the high school I would later attend.

I’ve lived in New Mexico since August 2016, when I moved from Boulder, Colo., to attend the University of New Mexico and obtain a degree in multimedia journalism. Originally, I wasn’t particularly interested in coming to UNM, but when it became the most cost-effective option, my mom pushed me to visit and I fell in love.

Prior to that, though, I had dreams of attending the University of Colorado; that’s where my dad went, where my grandpa had taught. I didn’t really realize until the summer before my senior year of high school when I took a tour of the campus and we stepped into their newly-remodeled rec center and I looked out over the city and saw my high school just down the street that I might want to get a little farther from home.

When this job came open over the summer, I jumped at the opportunity. I feel very lucky to be here in this community, covering three high schools with the sort of support I had only heard about but had never seen.

If I’m being honest, I didn’t expect to be sitting here writing this today. Just getting an interview was a win for me, so to have gotten the job, too? It’s a dream come true. I can’t wait to getting to tell the stories every week of the incredible athletes that call Valencia County home.

Sports have always been my biggest interest, from the time I was a fourth-grader trying to remember my multiplication tables using the Colorado Buffaloes football roster until I began writing about sports in 2015 for various sports blogs, trying to cover the teams I had grown up watching from the cafeteria at school.

It didn’t take long for me to realize that if I were to have a future in sports it would have to be some place other than on the field as my athletic career flamed out rather early, culminating in being cut from the golf team during my junior year of high school. I remember first thinking that I probably wasn’t destined to be a professional athlete during recess in elementary school.

Due to how much I enjoyed writing in school, and my obsession with reading two different sports pages every morning before I left for school, sports journalism was a natural fit for me. With those two interests, now I have a career.

It was something I had some hesitation about initially, with this fear that making it work would turn something I’ve enjoyed for so long into a chore instead of a joy. Instead, it’s changed my relationship with sports in a way that I’m grateful for.

This provided me with some incredible opportunities that have helped shape me as a writer, in particular covering the NCAA Tournament in Des Moines, Iowa, in 2016. I was terrified the entire weekend, but seeing how the reporters I had grown up reading and seeing on TV was hugely influential and gave me a model to emulate.

Since I got to UNM, I’ve been honing my skills covering the Lobos in nearly every sport, including the Mountain West Basketball tournaments and football games as far as Madison, Wisc. I worked as hard as I could my entire time there, falling asleep editing at 4 o’clock in the morning and getting up to do it again the next day with my eye on a chance like this one.

I hope that the work I put into each and every piece I write will come through on the page as you’re reading. If I’ve done that, and you’ve learned something you didn’t know before, then I’ll have accomplished my goal.

If you see me out and about, come up and say hi. I’d love to get to know you.

Her letter is in form of cartoon 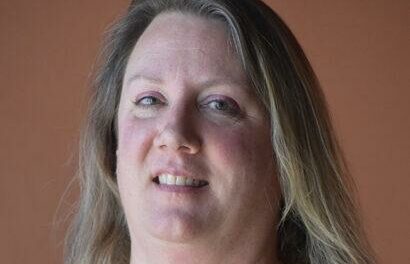