He was a World War II veteran, who proudly served his country in Germany from 1942-1945, experiencing hardship and using his talents to preserve our freedom. He trained in Fort Bliss, Texas, and Fort Sill, Okla. Elias visited Fort Sill last year and had fond memories of being with his beloved wife, Elena, there in their youth.

He served in Battery “A” Battalion 241 field artillery. In war, he supervised eight men in the operation and firing of a 105 millimeter howitzer. Elias bore sighted howitzer and relayed fire commands to gunners. He served overseas for 17 months in European Theater of Operations.

His three years in WWII were as truck driver, gunner and chief of section light artillery. Elias had campaigns in northern France, Ardennes Rhineland, Central Europe and was decorated with the American Theatre Ribbon and the European Middle Eastern Ribbon Victory Medal.

Upon return home, he and Elena started a family in Adelino and worshipped at Immaculate Conception Catholic Church in Tomé, where they both served as eucharistic ministers and labored there cheerfully. He worked at the Ice Plant in the Belen ATSF Railway, at General Electric as a machinist, then was in shipping in Albuquerque.

His later years were spent with family and traveling. Elias traveled to Hawaii, renewed 60-year vows and viewed Pearl Harbor. They traveled to Alaska for their 70th anniversary. He also did the pilgrimage to the Tomé Hill in his 90s.

Elias’s life was filled with hardship and triumphs. Serving his country for us all was his greatest honor and love for the Lord. He was a servant and will always be remembered as that.

He was preceded in death by his loving wife of 73 years, Elena; granddaughter, Rachel Ann; and brother, Jose Calles.

Elias was a loyal father and tata to four children, Ambrose and Ricky Calles, Patti Sellars and Jeanette Urtiaga; 12 grandchildren and 12 great-grandchildren, and one due in October; and brother, Adolfo Calles.

Services will be held on Thursday, Sept. 26, at Immaculate Conception Catholic Church, beginning with a viewing at 10 a.m., a Rosary to be recited at 11 a.m., and a Funeral Mass to be officiated by Father Hernandez at 11:30 a.m. Interment will follow at Tomé Catholic Cemetery.

In lieu of flowers, please contribute to the repairs of the church interior at Immaculate Conception Tome fundraiser in his name.

She was born Tuesday, April 9, 1918, in Alamosa, Colo. Matilde was one of 11 children born to Natividad and Damian Lopez Sr.

She was preceded in death by her husband of 59 years, Jose Domingo Otero.

She is survived by five children, Juana and Art Hurley, Margaret Mireles, Joe Jr. (Kiko) and Bea Otero, and Evelyn and Tom Ward; and 13 grandchildren. She is also survived by one sister, Alice Uribe; and three brothers, Victor, Damian, and Meliton Lopez.

Matilde enjoyed many hobbies, canning during harvest time, trying new recipes, reading, puzzles and her one passion was traveling. She had an adventurous heart and a willingness to try anything and everything, at least once.

She will be deeply missed by all who knew and loved her. Free from the bonds of this world, may she rest in peace.

Please visit our online guestbook for Mary Ellen at FrenchFunerals.com 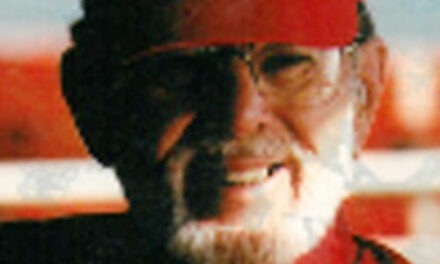