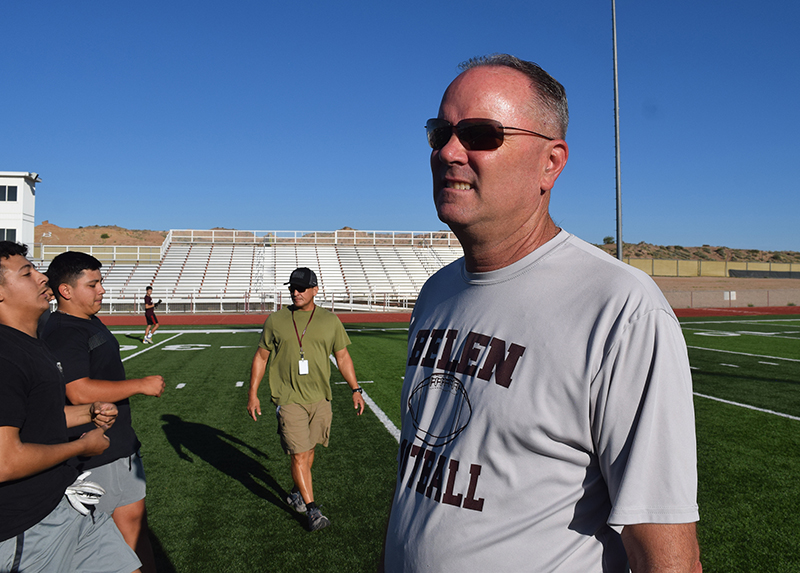 BELÈN— Well before the first game, even the first official practice, the excitement is returning for many Belèn High School football fans.

The Eagles’ gridiron coaching carousel may finally have stopped turning with the hiring of longtime assistant Kevin Peña as head coach. Peña has been with the football program in various roles for 23 years, and before that was the BHS head baseball coach. He says he has heard positive reaction to his hiring.

“I don’t think my phone has ever received so many messages, so many phone calls in the last few weeks,” head coach Peña said. “I think the community wanted someone who was local, someone who would be there for the kids … I’m coaching kids now whose dads I coached in high school in my early career, so I’ve been around for a while.”

Consistency is one of the pillars of coaching, but that consistency at the top of the Belèn football program has been missing with a string of head coaches coming and going in recent years. With Peña, who replaces Andrew McCraw who left after one year to take the head coaching position at Clovis High School, the commitment and love for the Eagles is apparent.

In addition to his decades-long assistant coaching stint, the 57-year-old Peña is a 1983 graduate of Belèn High School, and a former quarterback. Four of his sons put on the pads for the Eagles, including his stepson, Seth, on this years’ squad.

“My closet is all maroon and white,” Peña said, referring to Belèn school colors. “And it will probably never change. I don’t want it to change. I won’t let it change. But the wardrobe does have one shirt that clashes with the rest.

“I have a grandson that plays for Los Lunas, so I have one Los Lunas shirt in my closet,” Peña  said. “But when he comes over here, I make him put on maroon. In our house, we live and die maroon and white.”

And that loyalty grabbed the attention of BCS Superintendent Lawrence Sanchez, who hired Peña in the absence of an athletic coordinator this summer.  Sanchez said the new head of the program has a great knowledge of football as well as leadership skills on the field.

“Since John Lerma left (in 2015) we have had five coaches. I wish all of them well in their new endeavors, but they’re not from here. We need somebody that’s going to be here for the long term,” Sanchez said. “There’s no doubt that Kevin embodies the ideals of loyal and true.”

Capturing a state football championship is the ultimate prize, with winning district and reaching the state playoffs immediate goals. But the Eagles have a brutal early-season schedule that includes a season opening home game — the Valencia Bowl — against last years’ 5A state champion Los Lunas High School, which has moved up to 6A. That game on Aug. 19 is followed by an Aug. 25 meeting in Albuquerque against Manzano High School, and a Sept. 2 road game against 5A runner-up Artesia.

While Peña is realistic, he has also seen promise during preseason workouts. He likes the athletic ability that has been showcased, even as the players get used to operating new schemes.

“The goal is to win district, win as many games as we can,” the coach said. “But if our kids are playing hard, that is all I’m going ask of them. Don’t quit on me. Play until the end. Give it all you have.”

Much of the Peña philosophy comes from his time in the military, 33 years in the New Mexico Air National Guard, the last 20 years full-time.

Peña applied for the head coaching position not only because of the support of his family, especially his wife, Emma, but also because of support from the NMANG.  His superiors, all the way up to the adjutant general, Brig. Gen. Miguel Aguilar, encouraged Peña to apply.

“He wants us out there,” Peña said of the general. “We serve the community in multiple ways, not just the security of our state and our nation.”

After one more year, Peña will retire from the NMANG, allowing him to focus on coaching and perhaps some other responsibilities with the school district. Until then, he admits there will be some sleepless nights balancing both his career and football. But he is inviting the community along for the ride. 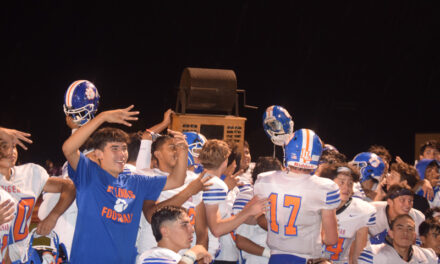