People and Places: ‘Tis the Season 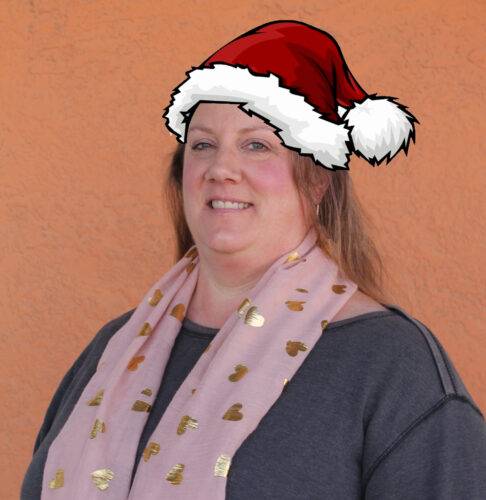 It’s all jingly and bright at the Valencia County News-Bulletin office, and I low-key hate it.

I was conscripted into decorating the front office at the beginning of the month, complete with tree — white with News-Bulletin green ornaments, of course. There’s a Santa hat with my name on it, written in glitter glue.

Full blame for the festivities rests with my co-workers. Our Los Lunas reporter seems to have an unrelenting supply of optimism and cheer, and very chipper, holiday-specific suggestions. The enthusiasm is exhausting. (She may or may not have been a cheerleader in a former life.)

The sports guy has let me down. I was hoping for at least a little curmudgeon-ly-ness from him but no, oh no. He was the first to suggest the Christmas music the day after Thanksgiving. I’ve given him a year to build a turkey day play list as penance.

The tunes have shifted to Sia somberly singing “Snowman,” which is unsettling cause I have the “Elastic Heart” video with Shia LeBeouf and Maddie Ziegler permanently living rent free in my head.

There’s a Christmas lunch in the works and white elephant gift extravaganza. I’ve been told I can wear the hat with the elf ears at our lunch. I don’t remember agreeing to this.

Which reminds me, I need to buy a gift or an elephant.

Oh, the song playing now is “Mistletoe and Wine.” I mean … if you insist. The singer seems very persuasive. Sure, one glass won’t hurt. (For legal reasons, that’s a joke.)

Gifts and rejoicing are now being called for and there seems to be some kind of choir in the background. I don’t have the willpower to find out the name, sorry.

It’s been a haze of light parades, Santa sightings, angel trees, gift giving and we’re barely half way through the month. I managed to flail around a bit last weekend and buy gifts for my kids. It was mostly socks, if we’re being honest. What?! The youngest one specifically asked for socks. Honest! Fine, I’ll hunt up some gift cards.

The kids and I will be making the great trek back to the Midwest next week to see the fam and the cows. I keep making half-hearted attempts to get gifts for my folks, but … I think I’ll end up going with the tried and true, ‘My presence is your present.’ Yeah, I can pull that off.

Plus, we’re driving a very long way. That’s fair. Actually, if I have my way, the boys will do most of the driving and I can nap in the back seat.

I mean make a right at Albuquerque, drive 17 hours then head south about an hour and boom, we’re there. Basically.

Taking a peep at the weather app tells me its 64 degrees back at my parents’ house. For comparison’s sake, it’s 40 right now in Belen. Forecast says it will be in the upper 40s and low 50s when we’re in Missouri, so that changes my packing plans.

Ha! Want to hear something fun? As I’m wrapping up this little homage to seasonal grumpiness, Kelly Clarkson is belting out another one — “Christmas Isn’t Canceled (Just You).” Seriously guys, I cannot make this stuff up.

Apparently Christmas cookies have now entered the office. Fine, fine, I give up. Gimme’ the elf ears, find those jingle bells and let’s get holly and jolly, cause this hot mess only comes once a year.