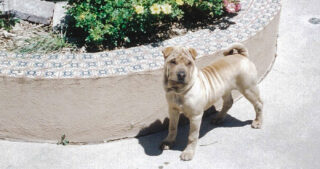 Her life was cut short last week after a pair of pit bulls attacked and mauled her while on a daily walk with Lindberg in their Rio Communities neighborhood on Christmas Eve.

It was about noon on Monday, Dec. 24, when Lindberg and Jade were walking by a house on the corner of Carmel Road and Toluck.

“All of a sudden, two pit bulls come out of a yard and attacked my dog, Jade,” said Lindberg, a member of the Belen Board of Education. “She (Jade) was doing pretty good against the first one, who had grabbed on to the side of her face, but with the other dog got her leg, they both proceeded to maul her.”

Lindberg, armed with a walking stick and dog mace, tried to defend his trusted pet, but the two pits drug Jade all over the street before an unidentified man came out and pulled the dogs off.

“She was just out of it — passed out,” Lindberg said of his dog. “She was laying on her side, and all I could think was, ‘They killed my dog.’”

As Lindberg stood in shock, several neighbors came out, wanting to help. He told them not to touch her, not knowing what would come next. All of a sudden, a big puff of air came out of the canine and she was able to stand up.

Lindberg called his wife, Dorothy, and she came to pick them up in his truck. Unable to find a local veterinarian’s office open, the couple took Jade, bleeding and in pain, to the Albuquerque Animal Emergency Clinic.

Jade had surgery on the afternoon of Thursday, Dec. 27, and everything seemed to go well. Her prognosis was good, Lindberg said. But the next morning, the vet called, saying Jade had died, most likely from a blood clot.

“If this was a child, these dogs would have killed the child,” Lindberg said. “I don’t want people walking by with a child and get attacked.”

Thankfully, Lindberg wasn’t hurt during the attack, but he’s still concerned for others. He did go to the house where the dogs ran out of, but no one was there.

“I walked her every day,” Lindberg said of Jade. “This was the first time I’ve ever encountered (these dogs). I had heard (the homeowners) arguing afterward about who had left the gate open.”

While devastated about his faithful companion, Lindberg is worried about what might happen to other dogs and children in the neighborhood if these two pit bulls get out again.