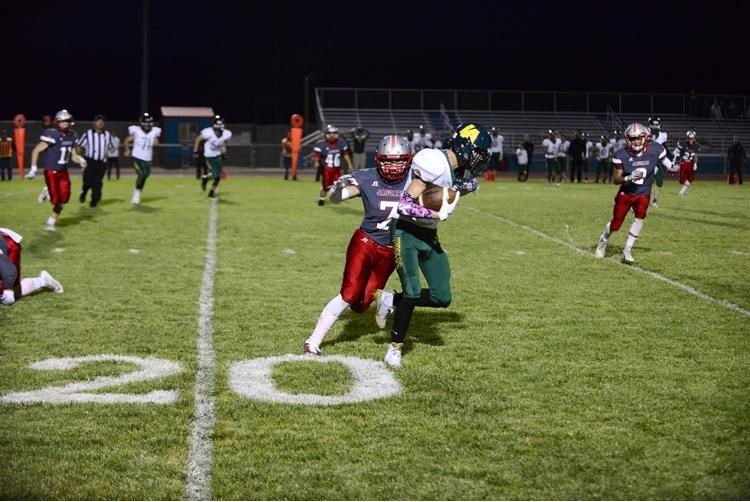 The Valencia Jaguars finally got into the win column. The Jaguars beat the Los Alamos Hilltoppers on Friday night at VHS, 34-6.

VHS improved to 1-5 on the season with the win over the 3-4 Hilltoppers.

Los Alamos, already a small team, with only 30 players listed on the MaxPreps roster, had extremely limited numbers, with only 19 players making the trip.

Valencia opened the scoring on the very first play of the second quarter, as cornerback Ryan Thompson jumped a route and intercepted the ball, returning it for the score.

A successful two-point conversion made it 8-0.

“The guy just ran out, I just saw him behind the line so I just tried to go up on that and as soon as I saw the ball I just wanted to high point it,” Thompson said. “I wasn’t going to let him get that ball.”

The Hilltoppers were threatening to score on the following possession before Tim Houck had the inside track on a curl route and was able to come up with the Jaguar’s second interception.

Thompson did the honors on offense this time, scoring up the middle to make it 16-0 following the two-point conversion.

With 6:20 remaining in the first half, VHS was in control.

Another pick from Thompson on the Toppers’ first possession of the second half set up another touchdown drive. This time, Nate Rodriguez kept on the option and took it in himself to make it 22-0 with 6:01 left in the third.

Los Alamos finally got on the board moments later, as James Rodriguez scored out of the backfield. The two-point conversion failed, and the Jags lead was cut to 22-6.

VHS answered back with a drive that chewed up the rest of the third quarter and culminated in a touchdown pass to Pedro Garcia, who fought through two tackles to get into the endzone.

A two-point conversion was no good just before the game was sent to a lightning delay at 28-6.

With their first possession after the delay, VHS squandered an opportunity in the red zone with a fumble on the option pitch that Joshua Carson recovered for LAHS.

However, the Hilltoppers failed to do anything with the extra opportunity and gave the ball back to the Jaguars after an uneventful possession.

The final touchdown of the game came with less than two minutes remaining and put the cherry on top of the performance for the Jaguars as Daniel Selvera ran it up the right side and into the endzone to make it 34-6.

“(The win) is definitely a confidence booster with our record,” Thompson said. “We just can’t get comfortable and need to keep going and keep pushing forward and take these next two weeks just to push hard and come out strong in that next game.”

After next week’s bye week, the Jaguars will host Los Lunas in the first rivalry game of the season. That game is scheduled to kick off at 7 p.m. on Oct. 18 at Valencia High School.

The Eagles fell for the sixth straight week. This time, it was Deming that got the better of BHS in a 34-14 victory.

Belen never led, scoring for the first time in the third quarter already down 22-0.

A scary moment for the Eagles occurred in the fourth quarter when quarterback Luke Aragon had to be taken to the hospital after suffering a concussion and a neck injury.

He was released the same night, and head coach Ty House said he was feeling better, but he was sore. The Eagles were in the redzone when the injury occurred, and would have cut the lead to 28-21 with a touchdown.

The team gets a bye next week before returning to action a little closer to home on Saturday, Oct. 19 at 1 p.m. against Valley in Albuquerque.

The Vikings were sitting on an 0-6 record pending the result of Friday’s game against Rio Grande.

Last week, Valley fell 42-6 to Del Norte. Offensive struggles have plagued the team, as it has only managed to score more than one touchdown in two games so far this season.

The Tigers had their bye this week and will return to the field this Friday, Oct. 11 at 7 p.m. against Alamogordo.

The Tigers are 2-3 after trouncing Chaparral 59-7 on Friday.

AHS ranks 12th in Class 5A, nine spots behind Los Lunas, according to MaxPreps rankings.

Running back Sean Hays led the way for the Tigers against Chaparral, scoring four touchdowns on the ground.

Hays has eight touchdowns now on the year in the AHS offense, which relies heavily on the run.

The Tigers only passed six times in the game, but they completed four of them for two touchdowns.On paper, it is a favorable matchup for the staunch LLHS defensive line which has done a good job of slowing down the run all year long. 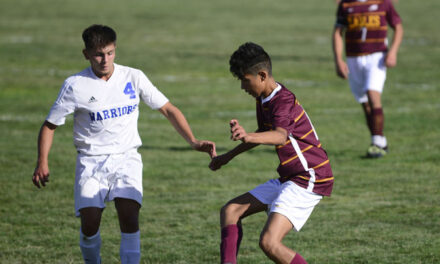