BELEN — A Rio Communities man has been charged with attempted murder after allegedly hitting another man with his vehicle early Saturday morning in Belen.

Police say Tyler Saavedra, 25, of Belen, hit 26-year-old Travis Breeze, of Belen, with a vehicle on South Fifth Street and left the scene.

Sgt. Jose Natividad, the acting Belen police chief, said Breeze is currently listed in critical condition in an Albuquerque hospital, suffering from numerous injuries, including bleeding in the brain, multiple skull fractures, nasal and jaw fractures, a fracture to his clavicle (collarbone) and left arm as well as road rash.

According to the criminal complaint, officers were called out to the 200 block of South Fifth Street at about 2 a.m. to report of a disturbance. When BPD officer Mario Vallejos arrived, he parked in front of the Belen Fire Station and noticed emergency personnel performing life-saving measures on Breeze.

Several witnesses told Vallejos that Saavedra had hit Breeze with his car. One witness wrote in her statement they were attending a graduation party at the home on South Fifth Street when Saavedra got into an altercation with a woman in the restroom.

“Travis became angry asked Tyler to leave; the altercation continued outside, where Tyler entered his vehicle and circled the area a couple of times,” the criminal complaint states. “(The witness), who was outside, noticed Tyler driving without headlights when she yelled at Travis to get out of the way, which is when Tyler swerved the vehicle toward Travis, hitting him.”

Another witness told officers Saavedra was calling Breeze outside, and when he did, Saavedra allegedly turned on the lights on the car and drove directly at Breeze, hitting him at a high rate of speed, projecting his body about 120 feet into the roadway.

The complaint states Saavedra left the scene in the car, a 2004 gold Mercedes, which did not belong to him. Valencia County sheriff’s Sgt. Pedro Chavez found the car at an apartment complex at 200 Garden Lane in Rio Communities, and Saavedra was taken into custody.

While at the Belen police station, Vallejos noticed a strong odor of alcohol emitting from Saavedra, as well as having blood-shot, watery eyes and slurred speech. A blood test was administered after the officer obtained a search warrant.

During the investigation, officers learned Saavedra had been intoxicated during the party and was carrying around a half-full bottle of vodka. Witnesses also told police he had shoved a woman in the bathroom “while grabbing her butt without consent while she was telling him to stop.” 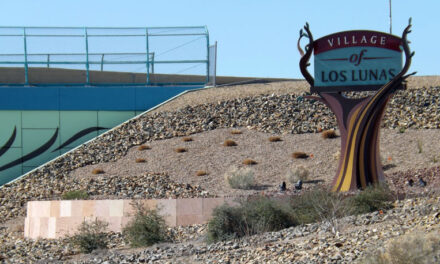