Home » Opinion » Remembering & honoring his past

Ninety years — it’s a nearly impossible amount of time for most of us to conceptualize, and I’m still not really sure I have fully grasped how much life can happen in that amount of time.

As long as I’ve known my grandpa, he had silvery white hair, back pain, wrinkles and callused hands. It’s been difficult for him to walk for the better part of a decade, and he mainly got around in a motorized wheelchair.

After he passed last month, just a few months after his 90th birthday, I had the opportunity to comb through old photos and videos to help create a nice tribute to him for his funeral.

In so many of them, his hair is dark brown, his skin looks darker and wrinkle-free, his beer belly seemed to disappear and, in some cases, even resembled a young Barack Obama. It was then I had the realization he had lived many lives before I, or my mother, were even a thought.

I’ve heard the stories — and of course have all of my own memories with him — but it has been such a blessing to be able to hear others’ memories of my grandpa, and the countless lives he has touched over the past almost century.

My grandpa has always been an avid fisherman and hunter. When I went to school in Hatch, after he would pick me up from Head Start, we often took trips to the Rio Grande near where the railroad crossed the river. He would set a night line for catfish while I hopped across the river rocks from one bank to another. 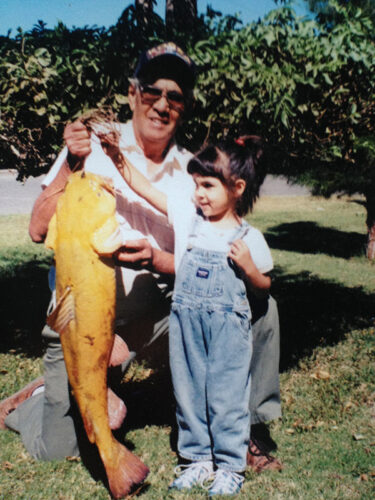 In one of his previous lives, he had an additional method for catching his child-sized catfish — noodling, although I don’t think he recognized that as what he was doing. When the Rio Grande still had enough water to swim, he would wade on the banks feeling around under boulders until he felt the smooth skin of a catfish.

My grandpa would then reach into the fish’s mouth to grab the large bone at the back of the throat and wrestled it to the surface while my mom, who was very much under driving age, waited as the get-away driver. Believe it or not, noodling was just as illegal then as it is now, but what is the New Mexico Department of Game and Fish going to do about it now?

In another one of his previous lives, he proudly served in the Korean War; however, he did not let this version of himself sit silently to the side, waiting to come out until after his passing. He wore his Veteran’s cap proudly everywhere he went — it was buried with him yesterday. A sign signifying the anniversary of the cease fire, July 27, 1953, hung outside his home every summer.

My grandpa wore his Army service proudly, often talking at Veteran’s events at local schools, being recognized at Hatch High Football games and having an American flag flowing behind him as he rode his scooter throughout the streets of Hatch.

Before my mom, her siblings, and his marriage to my grandma 65 years ago, he was born and raised on Hayner’s Ranch in Rincon, N.M., with his four siblings — another past life. I have yet to crack all of the shenanigans that happened there, but I look forward to hearing those stories and any others that will come out.

There are so many more memories, past lives and stories of him — like the time he saved people from a small plane crash at the Hatch Chile Festival — but, I cannot get to them all in just 600 words. I don’t think I could get to them all in a million words.

I am just incredibly thankful he dedicated at least one of his many lives to me.

Letters to the Editor (March 3)