On the 25th anniversary of the day she joined the Pilot Club of Belen — July 2, 1997 — Rhona Espinoza was inducted as the president of Pilot International — a position she is both humbled by and grateful for.

“I was filled with so much appreciation because Pilot is the greatest gift of my life, besides my family and my faith,” Espinoza said. “It’s been so fulfilling, and I’ve met some beautiful people throughout the years. 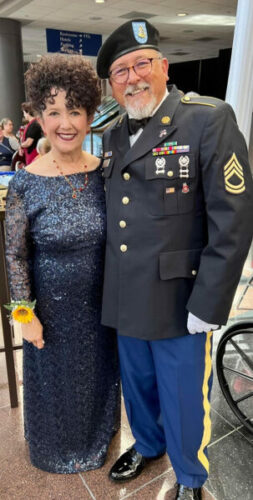 Submitted photo
Rhona Espinoza and her husband, Rudy, of Belen, at her installation banquet as president of Pilot International in Rochester, N.Y.

Espinoza was also appreciative that 13 members of her family attended the convention and her installation, which was held in Rochester, N.Y., along with 19 members of the Pilot Club of Belen, which was formed in 1947.

Espinoza, who is the executive director of the Greater Belen Chamber of Commerce and the Belen MainStreet Partnership, is only second PI president from New Mexico (Susan R.C. Beyer, of Albuquerque, served from 1949-50), and is the first Hispanic in the organization’s 101-year history.

“It makes me so proud,” Espinoza said. “I’m so proud of my culture, and I think everyone (at the convention) appreciates the fact that I am Hispanic, and I want to make my culture proud, my Pilot club and my district proud.”

At the convention, the New Mexico flag was presented to the office manager at Pilot headquarters, and will be flown over the building for the whole year.

Pilot International was formed in 1921 in Macon, Ga. The name “Pilot” was inspired by the mighty riverboat pilots of that day, who represented leadership and guidance. The world-wide service organization has thousands of members, from the Hub City to Japan.

“Pilot International has three focuses — youth leadership and development, brain safety and health and caring for those who care for others,” Espinoza said. “We provide grants for ‘pick-me-ups,’ which are special gifts we put together for firefighters, law enforcement, nursing homes, hospitals or a specific caregiver.”

Espinoza said her duties as president of Pilot International is to oversee the governance of the organization, it’s policies and procedures.

“As president, I have three priorities,” she said. “I’m challenging our members to bring in more members.”

When a member brings in a new pilot, their name will be put in a drawing. During the PI convention next year in Bellevue, Wash., a name will be drawn and they will win a trip to Albuquerque and attend the International Balloon Fiesta with Espinoza and her husband.

Another of the new president’s priorities is professional development. Espinoza will encourage the PI staff to take classes to become more well-rounded employees.

Her third priority this year will be hiring two staff members, including an executive director, a position she said might transition into a director of operations. Espinoza remembers when she was first invited into the Pilot Club of Belen by Eloisa Tabet and Dorothy Raether 25 years ago. As a very active, working mother of three children, and a devoted wife, she wanted something more — something for herself.

“When I joined Pilot, it was for me. It was something I could enjoy with other like-minded people, who wanted to give back to the community,” she remembers. “It wasn’t only because of the service projects we did and do, but it was the beautiful friendships I forged within my club, then in my district and then internationally.”

While she’s made a lot of life-long friends in Pilot, Espinoza said it’s been Dolores Padilla, a retired Belen librarian, who has had the most influence on her.

“She was and still is my mentor and has encouraged me all these years. She sent a congratulatory letter to the convention that was read at my installation,” she said. “Mayor Robert Noblin and U.S. Rep. Yvette Herrell also sent letters.” Submitted photo
Rhona Espinoza, bottom center, was joined at the annual convention by 19 members of the Pilot Club of Belen and the Southwestern District, which includes the Pilot Clubs of Belen and Los Lunas, as she was installed as president of Pilot International.

During this year’s convention, Espinoza organized several workshops for about 120 district governors on leadership, how to plan a convention, how to set up a website, budget and how to deal with challenging situations.

“The Pilot Club of Belen also put on a fabulous tea in my honor,” she said. “Our district, the Southwestern District, put on a reception for me, which about 400 people came to that.

“We gave everyone a can of green chile, a K-cup of piñon coffee and a little bag of biscochitos that were made locally.”

Proud of her heritage, Espinoza wanted those from around the world who attended convention and installation banquet to celebrate with a traditional La Marcha, an Hispanic dance usually performed at weddings. Espinoza’s son, Ragon, and daughter, Rachel, led the dance of about 200 participants.

The theme for this year’s convention was sunflowers, and to continue it through the coming year, Espinoza’s hashtag will be #spreadingpilotsunshine.

“The whole mantra this year is to spread pilot sunshine because I feel if people see how much good we do … they’ll want to be a part of us because we are the service organization with heart,” she said.