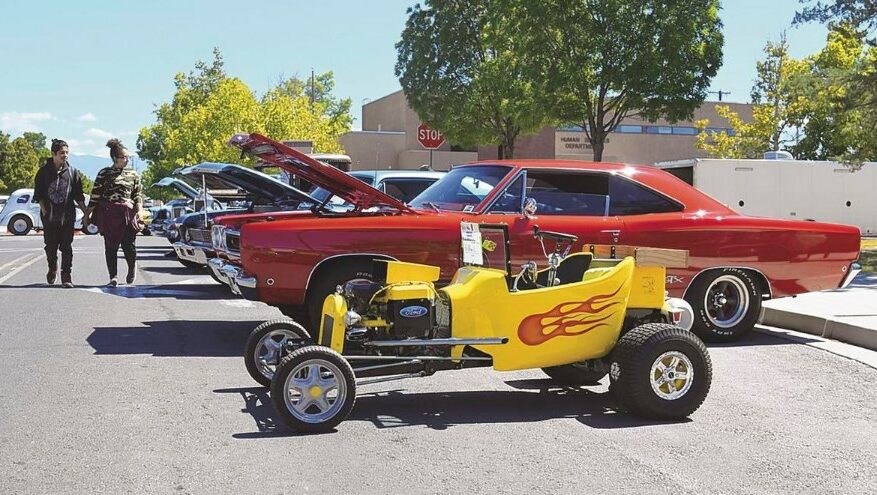 The annual Rio Abajo Becker Street Festival, which will include a car show, will be held this weekend in Belen.

BELEN — This year marks the 20th anniversary of the Rio Abajo Becker Street Festival — filled with lots of fun, food and, of course, great music.

The annual festival, which is sponsored by the Greater Belen Chamber of Commerce, will be held from 10 a.m. to 9 p.m., Saturday, Sept. 24, on Becker Avenue in Belen.

In the beginning, the then three-day event was called Rio Abajo Days and held at the Valencia County Fairgrounds. In 2009, it morphed into a one-day, all-day event and was moved to downtown on Becker Avenue. The name changed a year later to reflect what the event had become — a street festival.

“The event has something for everyone in the family,” said Rhona Espinoza, the executive director of the Greater Belen Chamber of Commerce. “We have something for car enthusiast with the car show and the Poker Run.

“People need to come out because we have great live bands, great vendors, delicious food trucks and vendors, an amazing car show and, best of all, it’s free admission. Although we hope they spend a lot of money with our vendors.”

Some of the food trucks that will be at the Rio Abajo Becker Street Festival include Parker’s Pizza, Game Changers, Blue Line Grill, Joe’s Hot Dogs and Two Men and a Grill. Other food vendors will be Rodriguez Mexican Food, Sugar Shack, Frank’s Roasted Corn and Double Cup Coffee.

Espinoza said the food will be terrific, and many of the ones who were at the festival last year sold out.

“They’re going to be set up in the parking lot at City Hall in a U shape, with tables and chairs in the middle,” Espinoza said.

The wine and beer tent, which will be hosted by Black Smuggler’s Winery and Chavez Vineyard and Hub City Brewery, will be located east of the gazebo.

There will also be a bounce house obstacle course set up for the children in the parking lot of the old Bank of Albuquerque.

One of the most popular sights at the Rio Abajo Becker Street Festival is the car show, which Espinoza expects to have at least 80 cars parked up and down Becker Avenue.

“It’s supposed to be a beautiful day — 84 degrees, partly cloudy,” Espinoza said. “And I’m so excited with the lineup of bands and entertainment this year. It’s going to be fantastic.”

The bands include the Marty Zamora Band, Keith Sanchez and the Moonthieves, Black Pearl Band and the Daniel Solis Band. Other entertainment will come from Dance in Motion, Belen Goju Ryu Karate, Boardwalk Gymnastics and Jazzercise Youth.

The popular dance contest will kick off at 6 with couples competing in different categories, such as the two-step, jitterbug/swing, the twist and ranchera.

“We’re going to have some great prizes — gift cards — for first and second places,” she said. “We’re doing it a little earlier so people can come out.”

Espinoza said she’s grateful for the sponsors who have donated to the chamber’s largest fundraiser of the year.

“Everything costs a little more this year, but I still think we’ll do OK,” she said. “We’re going to have really fun vendors. It’s going to be a great event! We’re just really excited. People are ready to celebrate.”

For the full schedule, visit belenchamber.com.