With temperatures in the 30s at game time and a biting breeze that made it seem even colder, the Los Lunas Tigers’ bats went cold, causing them to suffer a chilling 5-2 loss to the Rio Grande Ravens.

After Rio Grande broke a 2-2 tie with two runs in the sixth, the Tigers went down 1-2-3 in each of their final two at bats.

“We just didn’t put the ball in play offensively,” said Tiger head coach Steve Contreras, who watched the game from behind the backstop. The coach was serving a one-game suspension after being ejected the previous game for arguing balls and strikes. “You can’t score many runs if you can’t put the ball in play, and we never got it going offensively for whatever reason.”

One reason may have been the cold. Another may have been Rio’s lanky left-handerAaron Aguilar, who earned a complete game victory, allowed seven hits and struck out 13 batters.

“He kept us off balance; he mixed up his pitches real well and had good location,” Contreras said of Aguilar. “He wasn’t so overpowering that he should have been striking us out.

“But tip your hat to him. He pitched a good game.”

Los Lunas’ Brian Holmes also pitched well through five innings, but began to tire and was lifted after allowing the first two Raven hitters to reach base in the sixth inning.

Holmes, who gave up five hits, walked three and struck out four, took the loss in his first appearance of the season.

Lefty Larry Sutherland came on in relief of Holmes and retired the first batter on an infield pop out. Rio put the pressure on by advancing the runners on a double steal. Both scored on a squeeze play when Sutherland fielded the bunt and retired the batter at first base, and the runner from second base came all the way around to score.

Rio Grande manufactured nearly all its runs. “They were real aggressive, and they executed real well,” Contreras said. “We didn’t give ourselves a chance because we weren’t getting any base runners on.”

The Ravens scored their first run in the second inning on a delayed double steal with base runners on first and third. They added another run in the fifth by successfully executing a sacrifice squeeze.

Los Lunas tied the score, 1-1, in the bottom of the second. J.D. Garcia doubled and advanced to third on a single by Matt Baca. He later scored on a passed ball.

The Tigers also answered the Ravens’ run in the fifth. Senior leadoff hitter Travis Ferrel started a two-out rally with a base hit. Christian Rael and Josh Hernandez followed with singles. But on the play to the plate after Hernandez’s hit, Rael tried to take third and was thrown out to end the inning.

“We lost confidence and let them take over,” said Garcia, the Tigers’ senior second baseman. “We need to stay on top the whole game and make them play at our level and not play at their level.

“It’s more mental than anything else,” he continued. “Our heads weren’t in the game. We were in it the first few innings, but we sort of drifted away.”

Hernandez went 3 for 3 at the plate for the Tigers, while Rael was 2 for 3.

Los Lunas played at La Cueva on Tuesday (no score was available at News-Bulletin press time).

The Tigers will begin defense of their title at the Rio Rancho Invitational when they meet Roswell at 10:30 a.m. Thursday.

The Tigers are hoping they can win that game, and win again Friday, to setup a possible rematch of last year’s championship game between Los Lunas and Rio Rancho.

Last year, the Tigers began a 10-game win streak at the tournament. Win No. 3 was a 3-2 victory over the host Rams in eight innings.

The Tigers are also hoping they can get their season jump-started by winning the tournament again.

“We’ve got to go back knowing we can win again — knowing that we’re the better team out there,” Garcia said. “I’ve been thinking about it all year. We have to defend our title.” 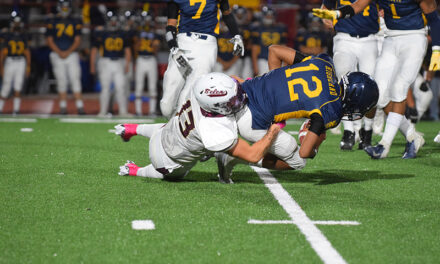 Living in a fantasy world