Las Nutrias is digging out from under mud after an arroyo flooded and a lateral ditch broke Friday.

Crews from the State Highway Department and Middle Rio Grande Conservancy District (MRGCD) have been working long hours, removing the dirt left behind after water flowed through the area.

While the rain was not heavy in the Las Nutrias area, it was on the east mesa, causing arroyos to run with a fury that hasn’t been seen in the past few years.

“Several of the old-timers say the water has run many times in the arroyos, but they haven’t seen anything like this before,” said Richard Jaramillo, manager of MRGCD’s Belen District.

“I’ve lived here 15 years, and the Las Nutrias arroyo has flooded five times,” said Iva O’Connor, whose property is located at the corner of NM 304 and Las Nutrias Road. “This is the fifth time we’ve seen the arroyo flood.

The O’Connor property got a double hit when the arroyo flood brought water from the east, causing the Las Nutrias Lateral ditch to overflow, sending water onto her property from the west.

“This is the first flood we’ve had since they paved Las Nutrias Road, which actually follows the arroyo. They built up the road to help it drain. I think that was part of the problem,” O’Connor said.

Neighbors came to the rescue at the O’Connor property Friday as the water stood four feet deep outside a cinderblock wall and one to two feet deep inside a couple of buildings.

“Lou Handley brought his front loader over from his dairy and put a dike across our driveway, which prevented further damage to our property,” O’Connor said. “Other neighbors, including Marge Schmidt and Kathy and Lorenzo Thomas, pitched in to move my paintings out of danger in the studio and helped sweep the water out of the studio. And others helped us empty the building, which got one to two feet of water in it.”

Several other properties were damaged by the flood water, including the hay in a pole barn owned by Willie Orona, which was reportedly washed away.

Damage also occurred to NM 304 where the arroyo crossed the road. The water washed out the roadbed, causing the asphalt to break away.

Also, at the height of the Las Nutrias Arroyo run, a car was washed out as it tried to cross the water on NM 304. The driver was rescued by the volunteer fire department.

Crews from the conservancy district went to work Friday evening and worked through the weekend to get the ditch system restored.

“Monday and Tuesday night, a couple of arroyos ran, but the ditches were all right,” said Jaramillo. “We tried to prevent ditch damage by lowering the water in the canal to help alleviate the pressure, but we got more rain on Friday than we expected and three or four arroyos ran, filling the ditches with dirt.”

The ditches overflowed because the arroyo ran and filled the Las Nutrias Lateral and San Juan Main with dirt, causing the water to bank, which in turn caused erosion resulting in several breaks in the ditches.

“Culvert pipes at the ditch crossings that are four or five feet in dimension and the bigger ones along the Las Nutrias Lateral and the San Juan Main were either nearly or completely filled with dirt,” Jaramillo said.

“We have about 10 pieces of machinery and about 10 to 15 men working to restore the irrigation and drainage ditches. We expect to have the larger portions completed by the end of the week. Then we will still have a lot of touch-up to do.”

Between the conservancy district’s five dump trucks and the highway department’s three dump trucks, a lot of dirt has been hauled away from the road and ditches.

“We got some of them passable by Tuesday, but it will take a few more days to fix them,” Greenwood said of the roads east and west of Las Nutrias that washed out.

The supervisor said new culverts will be needed in some places, but he doesn’t have any idea how much it will cost.

At the Tuesday Socorro County Commission meeting, the county leaders were scheduled to discus whether to declare the northern county area a disaster area so the county can receive money to fix the damage.

“I talked with Jody McSmith, Socorro county manager, and she said they are going to discuss ways to get money to fix the way Las Nutrias Road has impacted the arroyo,” said O’Connor. “Hopefully, they can do something to prevent this type of damage in the future.” 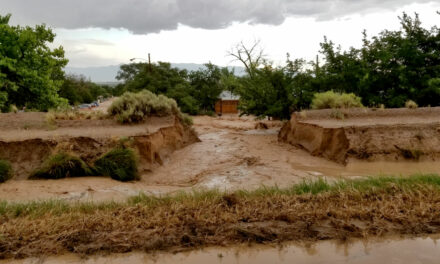