U.S. Sen. Martin Heinrich made a visit to Valencia County Tuesday, with stops in both Los Lunas and Belen, to gauge the impact of infrastructure dollars he helped bring into the area.

“Valencia County is a really good transportation hub. You have places where you can build, you have access to rail, you have the highway system and you have opportunity for workforce and housing,” Heinrich told the News Bulletin. “That’s what people are looking for right now, so if we can put the infrastructure in place to take advantage of that, that benefits the county, Belen, Los Lunas, the state of  New Mexico as a whole.” 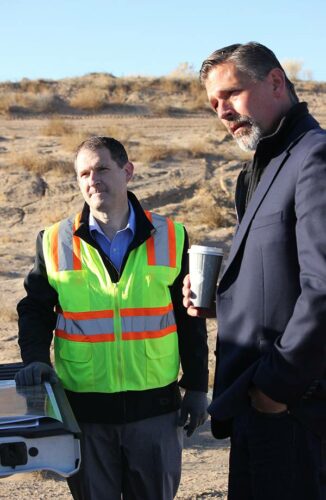 Heinrich’s first stop on his short tour of the county was to the location of the proposed new Interstate 25 interchange, near the intersection of Camelot Boulevard and Morris Road in Los Lunas.

According to Heinrich’s press team, he helped secure $25 million in funding from the U.S. Department of Transportation to help with the corridor project, which is expected to run along Morris Road from the interstate to N.M. 47.

The entirety of the project includes four miles of four-lane highway stretching across the river to N.M. 47, four signalized intersections and a new river crossing with the goal of alleviating traffic congestion on N.M. 6.

“These sorts of major infrastructure projects take long-term commitment and a lot of partners,” Heinrich said. “All of the leadership, whether its people like (Los Lunas) Mayor (Charles) Griego, the city councilors, the county commissioners, everyone was committed to it long term, and they have a partner in their engineering firm … It’s that value of local leadership working together that made this possible and made it easier for me to sell in D.C.”

After visiting with Los Lunas officials, Heinrich trekked onto the west mesa to visit and tour the Belen Regional Airport.

Under the Infrastructure Investment and Jobs Act, New Mexico airports were awarded about $18 million in grant funding with the Belen airport receiving $159,000 of the funding.

“It ties all of our communities together,” Heinrich said. “In a place like Belen here, it’s another mode in the multi-modal approach to economic development. Having a strong airport with modern capabilities layered on top of rail and highway infrastructure, creates opportunities for economic development.”

John Thompson, the director of the Belen Regional Airport, said their priority for the funding is to build a new fire station on the property.

In addition to giving the Air Force contracted firefighters based at the airport better facilities, it would also include a new fixed base operation, as well as upstairs conference and training rooms.

“With that, we would have a new fixed base operation — the airports call it an FBO,” Thompson said. “That’s where pilots go to buy their fuel, the pilot lounge and things. It’s kind of the meeting center of an airport.”

In the future, Thompson said he also had hopes of including a cafe in the building.

“The airport here is unusual in that we are one of very few, small, general aviation airports in the state that are self-sufficient with the Air Force contract,” Thompson said. “… What funding like this does is it … keeps the money up here separate so we can do our projects to make the airport more usable for pilots, more user friendly, make it more of a port for jets, helicopters, small planes. It just makes it like a new highway — an entry point here to Belen.” 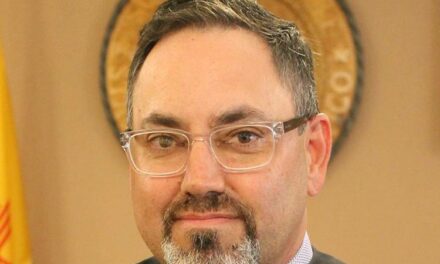 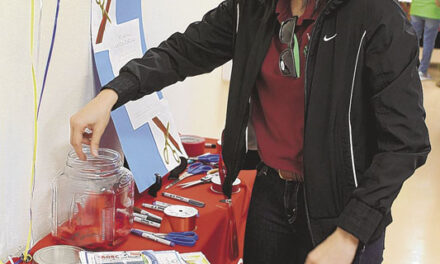