Now those hypothetical scenarios can be created in real life thanks to the brand new, four-story training tower at the Los Lunas Fire Department’s westside station.

The department led members of the public on tours of the tower and demonstrated features of its new aerial truck Saturday morning.

“The training tower helps increase our safety and efficiencies,” said Los Lunas Fire Chief John Gabaldon. “It helps us practice techniques we can share among the entire department. If one crew sees something on a call, this lets us share across all shifts.”

The training tower holds numerous rooms that can be used to recreate rescue scenarios for fire personnel. One room has moveable wall panels that can be reconfigured to give firefighters the chance to find their way through new environments during a fire.

Gabaldon said a fog machine is used to fill the building with “smoke” so firefighters aren’t exposed to excessive amounts of actual smoke.

“We have one burn room where we do burn things, but we only use untreated wooden pallets and straw,” the chief said. “That way we don’t expose people to more chemicals.”

Other features in the tower include openings on two of the floors that allow department personnel to set up a vertical pipe or shaft, to simulate rescue scenarios, such as people trapped in a stalled elevator.

Gabaldon said in years past when firefighters wanted to run hypothetical scenarios, they were often confined to paper or white boards. 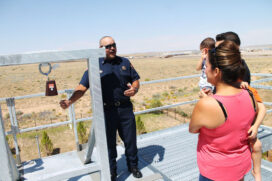 Los Lunas Fire Chief John Gabaldon talks to a Los Lunas family, Giovanna and David Archuleta and their two sons, Sebastian, 4, and Nehemiah, 2, about the roof-top features of the department’s new training tower.

“We’d talk with (neighboring fire departments) and other contacts to see what lessons they learned. We train with Target Solutions and they have thousands of classes on video, so we’d go through them,” he said. “A lot of them would back up what we found.”

The tower now gives personnel the real-world practice for those exercises once confined to paper.

“A lot of times, we have the knowledge of how a piece of equipment works but we couldn’t apply it. Now we can apply it before an incident,” Gabaldon said. “When I first started, I would run scenarios in my head. It would be me and the truck, pretending on my own.

“For a lot of departments across the nation, paper is all they have. All of our firefighters here do a great job with what they have.”

The chief said the tower is available to any fire department for training. The tower cost $268,000, of which $100,000 came from a New Mexico Fire Protection Grant, with the rest coming from the village’s general fund.

The department’s new aerial truck will help the department reach all the right spots during a fire, the chief said.

“When people think about an aerial truck, they think it’s for height but it’s also for reach,” Gabaldon said. “If we’re parked on the street, we may have to come all the way from the street, across the front yard and over the house, depending on where the fire is.”

With a reach of 101 feet, the aerial truck platform has two cameras — one regular HD camera and a thermal imaging unit.

“We can toggle between them and see the hot spots,” he said. “They are on the nozzle itself, so when it’s spraying water we are putting it where we need it. We can see if we’re hitting the right spot.”

With so many synthetic materials used in modern homes, Gabaldon said fires burn hot and fast.

“A lot of times we can’t put people on the roof and it’s hard to get water in there,” he said. “And at 2,000 gallons per minute, this can flow some water.”

The truck also has a hose bed that drops down to make loading hoses on easier, the chief said.

“That’s a health and safety issue for our personnel, not having to climb up and load hose,” he said.

The new aerial truck cost $1.33 million and was paid for by a voter-approved $5.79 million general obligation bond, which was also used to build the new westside station.

“We just want to thank everyone for their support and forward thinking for our firefighters and their safety,” Gabaldon said. 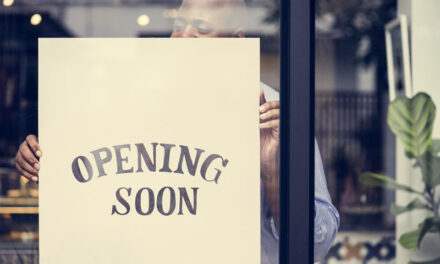 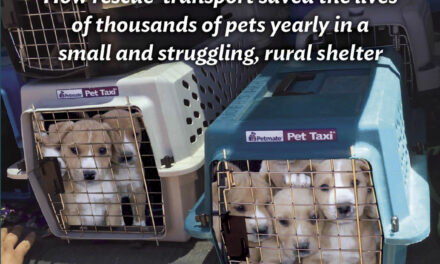