‘Signs’ takes on heaven in two forms of crisis

The scene is down-on-the-farm peaceful, the wind blowing through the high corn and the farmer awakening in the early morning light.

Suddenly, there’s a scream, a sound only a young child could make. The farmer drops his toothbrush and is downstairs and out into his field in just a few seconds.

It’s quiet, it’s eerie and when the farmer finds his children, they’re seemingly in shock. The little girl thinks she’s still asleep, but the boy turns his father’s head toward what’s frightening him and there is a huge circle of corn, downed in perfect symmetry, stalks unbroken.

Then other truly frightening events begin to happen as the family dog turns vicious, a “monster” appears on the roof of the house and a baby monitor starts picking up strange clicking noises that sound like incoming code.

The family believes the strange happenings are only occurring in Bucks County, Pa., where they live. But they switch on their television set and crop circles have also be found in India. The next day, dozens of bright lights are hovering over Mexico City. UFOs. The horror has gone global.

And the terror is very effective. The lead-in, in which really very little is actually shown, is tense and unnerving. A scene in which the farmer — Mel Gibson — enters the cornfield at night and catches a glimpse of a fleeting green-blue leg is played for all its worth.

The first real encounter with an alien comes when Gibson visits a local veterinarian’s house — and goes away convinced aliens do exist. Before that, he’s been a skeptic.

The underlying theme of the story is that, as aliens come down from the heavens, Gibson — a former priest — has reached a crisis of faith about whether heaven really exists.

He is a widower left to raise two children. He’s aided by his brother, played by Joaquin Phoenix, who has put his own life on hold and lives in an apartment over the garage.

Phoenix’s perforance is extraordinary. The terror that plays over his face as he’s watching the news of the aliens’ advance throughout the world is subtle and believable.

The movie is full of quirky characters, many more than in the usual science fiction film. In addition to the former priest, there’s a veterianarian — played by Shyamalan — who’s also dealing with his past but more terrified of his future.

There’s the farmer’s daughter, who can’t seem to find a decent glass of water. There’s his son, who is the only person in the film who tries to do something to protect himself and his family against the invasion. There’s a woman police officer who seems to have been dropped in Pennsylvania straight from “Fargo.” And then there are the aliens. But we won’t give that away.

This movie is a little more complex than might be expected. It’s about faith, family, rationality, grief. In truth, the UFO and crop circle phenomenon is just the setting against which the human crises play out. And it is very frightening. That makes it a chick flick and a boy joy all at the same time.

Perhaps the ending — we won’t give it away — is a bit of a let-down. But we think most people will forgive the filmmaker because the first three-quarters of the movie is so good.

It not only keeps you on the edge of your seat, but at times it makes you laugh out loud.

Don’t wait for the video. This movie deserves to be seen on the big screen with full sound effects — including the cries of a terrified dog and wailing children. We can hardly wait to see what Shyamalan will come up with next. 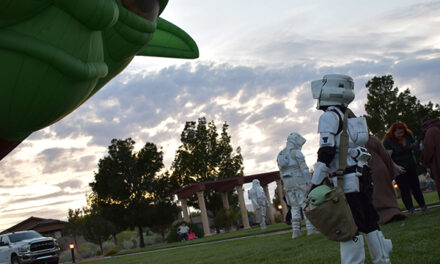