After 72 words were pronounced, used in a sentence and defined, the Valencia County Spelling Bee came down to two words — “neuralgia” and “rivalless.”

The field was narrowed to two by the sixth round with Manzano Vista Middle School eighth-grader Keith Thomas and Daniel Fernandez Intermediate School sixth-grader Chimene Lopez the remaining spellers.

Lopez was also confident as she recited “appoint,” “fidgeting,” “passel,” “sedition” and “appellate.”

With just two left on the stage, the students had to correctly spell two words in a row to take the county title.

Thomas was first to step up to the microphone. Word announcer Maggie McDonald read “neuralgia.” Thomas missed the spelling by one letter “neuralogia.”

Lopez responded to the challenge by spelling “neuralgia” correctly, then recited “rivalless” flawlessly to take the county title.

The daughter of Ron Lopez and Shawnee Otero and step-daughter of Tim Spangler was the county’s alternate for last year’s state competition.

Her dedication to practicing an hour every day to learn the words paid off, as she worked her way through both the Los Lunas Schools’ district competition and the county competition flawlessly.

As runner-up, Thomas will also represent the county at the state competition March 30 at Sandia Prep. The son of Anne E. Bennett and R. Lar and Roxanne Thomas remained calm during the hour-and-a-half competition as he watched 22 other spellers suffer the sound of the bell when their efforts were in vain.

The field of 24 worked its way through the list of words. Three spellers were eliminated in the opening round, and six were removed in the second round as the words became more difficult.

And then there were five — Thomas, Lopez, Kim Clements, Dallin Elizondo and Ginny Hall. The spellers sailed through the fourth round of words by correctly spelling “android,” “palooka,” “scourge,” “sedition” and “alfresco.”

After Lopez was determined the winner, Clements, Elizondo and Hall returned to the stage to see who would be the alternate for the state competition.

“Embalmment,” “edentulous” and “inimitable” stumped the spellers first time around. In the second go, “millennium” and “omniscient” eliminated Clements and Elizondo.

Then the daughter of Connie and Bill Hall spelled “apollonian” correctly to secure the alternate position. 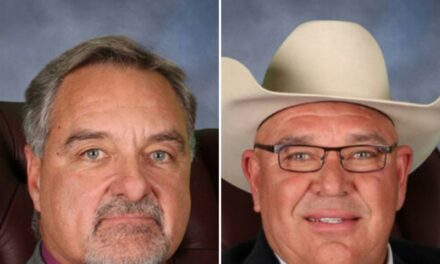