As crime statistics shift up and down from year to year, the Valencia County Sheriff’s Office leadership continues trying to serve county and city of Rio Communities residents now and into the future.

Valencia County Undersheriff Jeff Noah said law enforcement have what’s called the rules of 60, the first being 60 percent of a department’s resources should be dedicated to the field, answering calls for service.

“Right now, we have about 63 percent so we’re hitting that average,” Noah said.

“So writing reports, talking to people, getting information, working cases they should be doing that 60 percent of the time. The rest of the time, they should be driving around, being a preventative presence,” he said. “I think on our day shift, we’re way over that.”

However, if the department continues to lose officers to other agencies, Valencia County Sheriff Denise Vigil said averages could drop.

“As we lose our own to other agencies that are paying more money or people are just retiring, we have to figure out how are we going to continue to service the people of Valencia County effectively,” Vigil said. 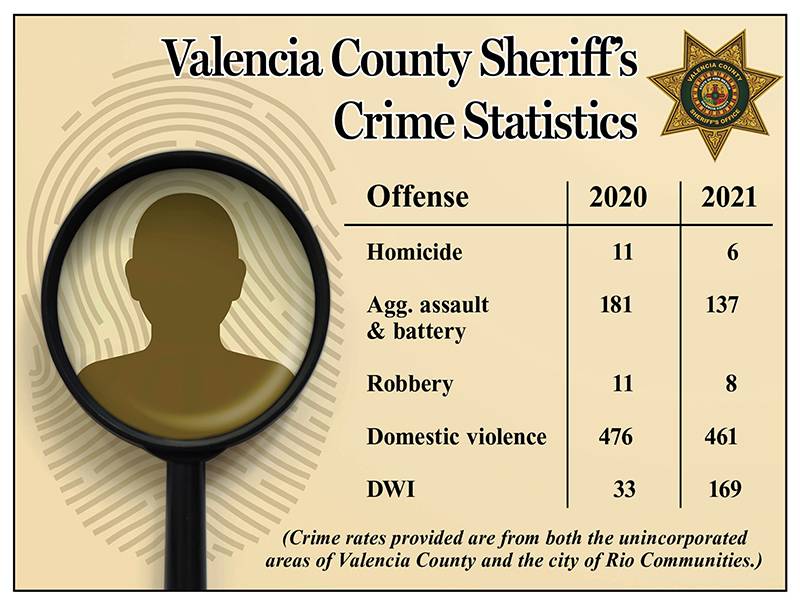 One way could be to ask people to report certain crimes by phone or online, the sheriff said.

Currently, a person can do a report by phone depending on the type of offense, and the same will be the case if the department is able to purchase software to create a report portal on the county’s website.

“Let’s say someone has a home here but they live in California and their home is burglarized,” Noah said. “A deputy can go over there, maybe a neighbor gives them the information, so they can write up a report. That might be something that can be handled either over the phone or online, and the deputy can be elsewhere.”

Vigil said precise criteria for which crimes could be reported online are still being developed, but most systems have some basic, initial questions that determine if a deputy should be dispatched.

Is it an emergency? Did it occur inside the sheriff’s office jurisdiction? Do you know who committed the crime? Is there evidence to collect?

“In most of these systems, like the one Doña Ana County uses, if you answer ‘yes’ to any of those questions, you can’t file an online report,” Noah said. “If it’s an emergency, it can’t wait a couple of days for someone to review the report. If there’s evidence, we need to send a deputy so it can be collected.

“If someone steals your daughter’s bicycle, if no one is hurt, there’s no evidence and you don’t know who did it, that’s the kind of thing this system could be used for.”

Currently, if a county resident or resident of Rio Communities needs to file a report, they can call the non-emergency dispatch number — 505-865-9130 — and a dispatcher will gather preliminary information, then pass the call on to a deputy.

“If someone hits your car in a parking lot and you drive home, then decide you want to make a report after all, a deputy can call you and take a report,” Vigil said. “Sometimes when people complain about deputies ‘just sitting under a tree’ in their unit, that’s what they’re doing. Obviously, if someone would rather do a report in person, of course the deputy will come to you.”

Of course, that deputy might not arrive immediately, the sheriff said. In 2021, deputies responded to 23,253 calls for service, ranging from homicide to assault to littering, with an average response time of 19 minutes.

“Now that doesn’t mean every call is going to be 19 minutes,” Vigil said. “Going from Highland Meadows (on the far western edge of the county) to Belen is 45 minutes by itself. Once they arrive on scene, it takes about an hour per call. Last year during the summer, we were averaging 50 calls per shift and we averaged 64 calls a day last year.

“I think most people realize deputies are going from call to call to call; we’ve had a lot of conversations with people.” 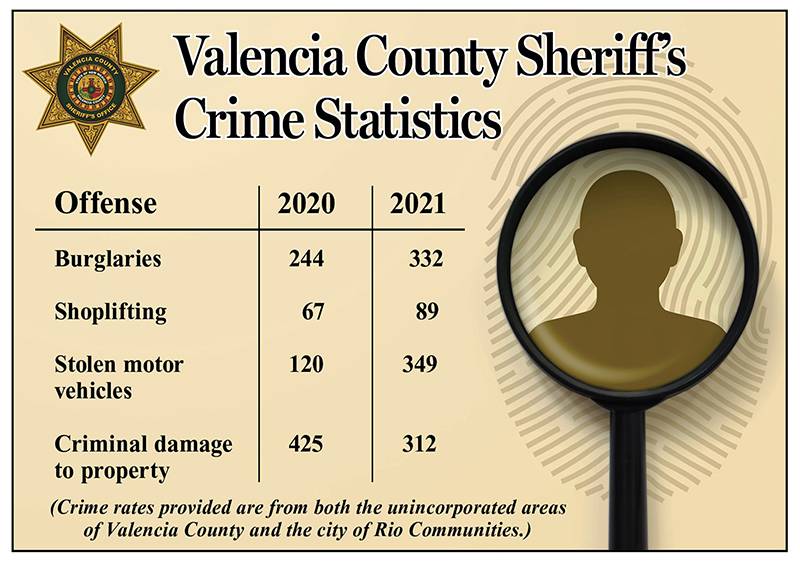 As a whole, the department is working to keep better tabs on cases as they move through the system, especially crimes like domestic violence and assault.

“Instead of just writing a report and filing it, we’re following up on the complaint, making sure victims are filing for restraining orders if they need to,” the sheriff said. “We’ve been working closely with the district attorney’s office, and they’re letting us know what’s happening with cases, whether victims are showing up for court so we can reach out and support them.”

Whether crimes are reported in person, by phone or via online portal in the future, Vigil said the department needs residents to report crimes, no matter how minor.

“We need that data. These numbers we talk about every year, they’re just what’s reported. If something isn’t reported, we don’t know there’s an area we need to focus on,” Noah said. “The sheriff met with some people about property crimes in a neighborhood. We pulled the reports from that area and there were two or three reports.

“So if you look at that, you’re going to think things are OK. We are going to focus where the stats tell us, where we’re needed. If your area shows zero reports and you’re having problems, you need to start reporting.”

The department’s shift sergeants are required to document where they’ve done heavy patrols every month, the sheriff said, so they can track whether their activities are effective in preventing criminal activity.

“The sergeant has to figure out what they’re going to do to prevent activity and then when they come back the next month, they have to tell us how it’s improved,” Vigil said. “This gets our sergeants communicating, hearing and sharing information.”

In addition to better communications with the DAs office, the sheriff said VCSO has been working closely with federal agencies on local operations.

“It’s not always us reaching out to them. They’re asking us to assist them,” Vigil said. “That tells me, as an organization, we have proven our trustworthiness and abilities.”

Highland Meadows fired up for training