The Belen High School softball team split its road doubleheader with Albuquerque Academy on Saturday. But it may not be enough to get them into the state playoffs.

With the split, the Lady Eagles stayed even at 4-4 in District 3-4A play, while the Chargers kept their edge over Belen in the playoff race with a 6-3 district record.

The Lady Eagles’ (8-9 overall) scoring drought continued as Academy (11-8) shut them out, 10-0, in the first game. Belen won the second game, 6-3 in eight innings, after some late-inning drama.

“I just told them in between the two games how important it is for us to go out and try hard to win every game,” head coach Nettie Salas said. “The girls just stayed positive and played better in the second game.”

In the second game, the Eagles opened the scoring with single runs in each of the first two innings.

The Chargers answered back with a run in the bottom half of the second to cut the Eagles’ lead in half, 2-1.

Belen scored another run in the fifth to extend its lead to 3-1. But in the seventh Academy pushed across two runners to send the game to extra innings.

In the eighth, Belen catcher Brandi Dearing and outfielder Katherine Archuleta both reached base on errors. Miriah Salas smashed a double to center field to score both. Then Jaclyn Trujeque reached on another Academy throwing error, and Salas raced home to give Belen its biggest lead of the game.

The Chargers were out 1-2-3 in their half of the inning, and the Lady Eagles kept their playoff hopes alive.

Eighth-grader Martina Chavez pitched all eight innings for the Lady Eagles and struck out five batters to improve her record to 2-1.

Offensively, the Lady Eagles were led by Salas and Archuleta, who each went 3 for 5. Shavon Montoya went 2 for 5.

“We would have liked to take both of the games,” coach Salas said, “because the race for second in the district is so close.”

In the opener, the Lady Eagles were shut out for the third game in a row despite putting runners in scoring position in the early innings.

“We had a few things happen in that game that set the tone for us,” Salas said. “We started off hitting well, but they were able to shut us down.

“We’ve been playing against the best pitching in the district, if not in Class 4A, in these last few games,” the coach continued. “That game was no different. Their pitching was better, and it’s hard to hit good pitching.”

The Lady Eagles have four games remaining and, according to coach Salas, have to win them all to have a chance at a state playoff berth.

Belen currently is in third place in the standings, 1 1/2 games behind second-place Academy. Silver, without a loss in district play, leads the district. The top two teams from the district advance to the state regional playoffs.

On Saturday, the Lady Eagles go to Deming for a doubleheader. They wrap up the season next Tuesday against the district pace-setting Silver Fighting Colts. 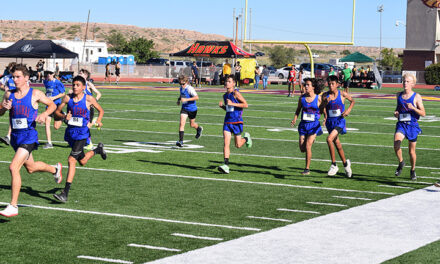