But it appears her days as a competitive athlete are behind her as she gets ready to take a bite out of her academic career.

Schollander helped the Tigers win back-to-back state championships in both volleyball and basketball in her junior and senior seasons.

For Jaidyn Schollander, basketball was her favorite sport, saying she enjoyed the “… intensity and the teamwork you have to win games. The heart and dedication you have to have. It’s not an individual sport …”
News-Bulletin file photos

And as a track athlete, she helped Los Lunas relay squads win championships as an eighth-grader, freshman and sophomore.

That’s all in the past, she said during a lunch break from her summer job working in an Albuquerque law office.

No, she’s not going into the legal profession. Schollander is just working there for a summer job. What she has her sights set on is a career as a dental hygienist, which she will study while attending the University of New Mexico.

“I’ve had so much work done to my teeth,” she said in explaining the reasoning behind her career choice. “I had braces for five or six years and I always had people working in my mouth. At first, I wanted to be an orthodontist, but decided to go the other way.”

Schollander had her opportunities to continue playing sports in college. Several Rocky Mountain Athletic Conference schools were interested in her, as was Eastern New Mexico, Northern New Mexico College and College of the Southwest, said her basketball coach, Marty Zeller.

She also had D1 offers in track, even though she didn’t run as a senior, he said.

Playing sports in college, however, would have taken too much time away from her studies, Schollander said,

“When I was in sports, that was my main focus and I want to flip that to school and focus on school because that’s going to be my whole life.”

It’s not as if she did poorly academically in high school, it’s just Schollander said she felt she could have excelled even more.

“I focused on sports all throughout my high school career,” she said. “I passed all my classes and I got great grades, but I feel like I could have gotten a lot more done.”

Jaidyn Schollander was a three-sport standout athlete at Los Lunas High School, including volleyball, basketball and track and field.

Not that she regrets playing sports. Quite the contrary.

“I loved it,” Schollander said. “I definitely miss it already. I know I’ll miss it more when the season comes around.”

Although a three-sport standout, it was basketball that Schollander loved the most.

“I like the intensity and the teamwork you have to have to win games,” she said. “The heart and dedication you have to have. It’s not an individual sport. You need everyone on the team to be on the same page.”

Schollander grew up in an athletic family and followed down the well-worn path that her older siblings, Preston and Andrea, laid out ahead of her.

“My brother always played basketball, baseball and football and my dad brought me up around sports and my mom played sports,” she said. “I guess I really didn’t have a choice, but it was my choice. I would have chosen that regardless.”

Her dad, Desi, would frequently take her to her brother’s YAFL practices and pit her against the older boys during sprints.

“He told them that if Jaidyn beats you, you’re running again,” Jaidyn Schollander recalled with a chuckle, adding there were a number of players that she would make run extra because of her speed.

Despite the competitive nature of the family, they all came together as one when Los Lunas met Goddard in the volleyball state finals in 2018.

“My brother, his senior year, played football in the state championship against Goddard and lost,” Schollander said. “So that was a big push to win for him and myself. When we beat Godard in volleyball, it was so great. Not just for me and but for my brother because he didn’t get to beat Goddard.”

But there is that little matter of college as she is breaking family tradition and will be a Lobo although the rest of the family either attended or rooted for New Mexico State.

“My dad said he would never wear a Lobo shirt unless I played for the Lobos,” Schollander said. “And that’s not going to happen. So it should be a good rivalry.” 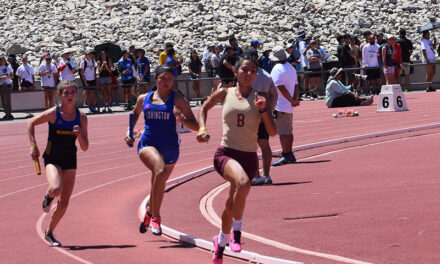 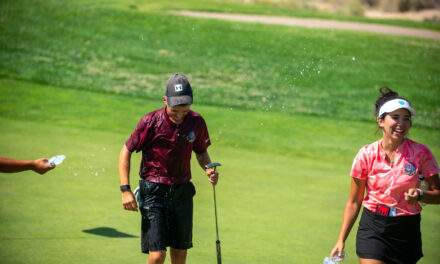