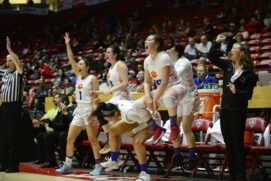 The Los Lunas Lady Tigers overcame a poor stretch on either side of halftime to blow out Bloomfield on Tuesday night, 62-35.

“That’s what the Lady Tigers do,” head coach Marty Zeller said. “We tightened up the defense a little bit and did what we do.”

The Tigers got off to a strong start in the first quarter, holding a 20-8 lead after one and appeared headed for another big victory. However, LLHS only managed to score five points in the second quarter and Bloomfield was able to cut the 12 point deficit to nine heading into the break.

Early in the third, it was a similar story as the ninth-seeded Bobcats cut the lead to as little as five with 5:09 left in the quarter.

Then, the Tigers did what they do and put on the defensive pressure with the full-court press and forced the Bobcats into a number of turnovers, BHS had 27 for the game, and score 17 unanswered to close out the quarter and take a 49-27 lead into the fourth quarter.

It also helped that the Tigers shot over 50 percent from the floor in the second half, going 12-of-24.

Feleena Candelaria played a massive part in the run, recording three steals during that stretch as well as posting a double-double with 16 points and 10 rebounds.

As a team, the Tigers came up with 17 steals throughout the game.

“I thought Feleena did an excellent job when we made that run,” Zeller said. “I talked to her all year, I was really concerned about her reading and leading from the back on defense. I talked to her about it and she assured me she had it today and she proved it right there. She had three steals right there on that backline, that was pretty awesome.”

On Thursday, the Tigers will kick off the day with an 8 a.m. tilt against No. 4 seeded Highland. The two met once already this season, with Los Lunas winning 73-63 at Highland in early December.

Tickets are $10 for general admission, $5 for students, seniors and military and $15 for reserved chairback seating. Parking at the Pit carries its own cost of $5.

The Los Lunas Lady Tigers had little problem dispatching No. 16 seed St. Pius in the first round of the state playoffs on Friday night, winning 56-39 to kick off their quest for a third straight state championship.

The Sartans (14-14) never provided much of a threat to the Tigers who led comfortably for nearly the entire game.

A 20 point second quarter was the spark that pushed the Tigers lead into double digits and they never looked back.

Defensively, they limited the Sartans to only 13 first half points, taking a 31-13 lead into the break.

SPXHS got the offense going a little more after the half, equaling their first half total in the third quarter, but were unable to slow down Los Lunas enough to make any real progress cutting into the lead. 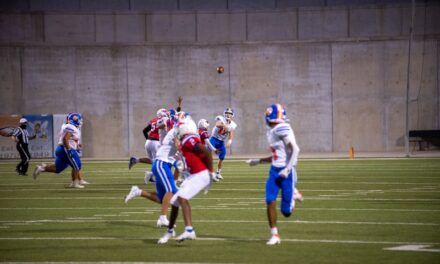