The Los Lunas High School baseball program took a big step forward last year when it advanced to a state quarterfinal playoff game for the first time in 17 years. The Tigers maintained their forward momentum Friday when they secured a berth in the state playoffs again this year, sweeping a home doubleheader over Alamogordo by scores of 7-4 and 14-4.

“We’re taking it one step at a time,” said Tiger head coach Steve Contreras. “The first step is getting into the playoffs. Now we’re going to try to get us a district championship.”

The Tigers played what could be construed as the District 3-5A championship game at Las Cruces Mayfield on Tuesday. Los Lunas entered the contest with an 8-1 district record. A win over Mayfield (8-2) would lock up the district title for the Tigers. A Los Lunas loss would give the Trojans the inside track in the title race (no score was available at News-Bulletin press time).

Los Lunas, which split a doubleheader with Mayfield earlier this month, was feeling good about its chances after Friday’s sweep.

“We’ve been hitting the ball pretty good, and we kept it going today,” Contreras said. “It was a good solid team effort. That’s the way we’ve been playing, so, hopefully, we can keep it going.”

Contreras credits the team’s five seniors for the Tigers’ success this season. But it has been a total team effort.

“It doesn’t matter if it’s a senior or an underclassmen,” said senior Travis Ferrel, “somebody is going to make a big play, just like Matt Baca did.”

Baca, a sophomore who also had a solid day defensively at third base, hit a bases-clearing triple to the gap in left field to end the nightcap by “mercy rule” in the fifth inning.

Castillo pitched all seven innings of the opener, allowing five hits and striking out 11. Hernandez surrendered three hits in five innings and struck out seven in the nightcap.

The dynamic duo also shined at the plate. Hernandez, the state’s leading hitter with a .688 batting average, went 6 for 7 on the day with three home runs and eight RBIs. Castillo, hitting a hefty .549 this season, was 4 for 7 with two home runs and five RBIs.

“Those two guys are our leaders, and I think everyone else is following their lead,” Contreras said. “They’re working hard; they’re doing what’s expected of them and what they expect from themselves.”

Alamo scored an unearned run off Castillo to take a 1-0 lead in the first inning of the first game. But Los Lunas tied the score in the bottom of the inning when Castillo singled home Hernandez, who had doubled.

Hernandez put the Tigers up 4-1 when he drilled a shot over the fence in right-center field. “I hit that one really good,” Hernandez said. “It went out pretty quick.”

Hernandez homered again in the sixth — a two-run blast. Castillo followed with a solo shot to give Los Lunas a 7-1 lead.

Castillo tired in the seventh but managed to get through the inning to earn his sixth win — with no defeats — this season.

In the second game, Los Lunas grabbed a 3-0 lead in the first inning. After Christain Rael led off with a walk and Nathan Romero followed with a single, Hernandez hit a wind-aided home run to center field.

On the mound, Hernandez struggled with his control in the early going, walking three of the first seven batters he faced. A walk and Los Lunas’ only error of the game led to a big second inning for Alamo. A two-out, three-run home run by John Henry Marquardt gave Alamo a 4-3 lead.

“When we jumped on them, 3-0, I think everyone relaxed,” Contreras said. “But I think them coming back like that helped us to re-focus on the task at hand and realize that we were a long way from being finished.”

Los Lunas batted around in its half of the second. After Romero’s two-run double put Los Lunas back in front, Alamo chose to intentionally walk Hernandez, who at that point was 5 for 5 with three home runs, and pitch to Castillo.

Alamo picked its poison. Castillo responded with a three-run homer to put Los Lunas ahead 9-4.

While Hernandez found his control and allowed just one more hit over the last three innings, Los Lunas added a run in the fourth on heads-up base running by James Alarcon. The senior first baseman scored from second base on an infield grounder when he noticed no one covering home plate.

Los Lunas built its winning rally on a leadoff ground-rule double by Romero. Hernandez followed with a run-scoring double. After walks to Castillo and Alarcon loaded the bases, Baca sent everyone home with his game-ending triple.

Ranked third in the Albuquerque Journal’s coaches poll, Los Lunas is optimistic about its chances in the post season. Last year, the Tigers lost a regional playoff game to La Cueva, 10-4. They’re hoping to take it a step further this season.

“We’re real tough all-around. I don’t think there is a weakness in our lineup,” Hernandez said. “As long as we play to our potential, we should do well.”

“It would be nice to have that state playoff game here in Los Lunas,” said Contreras.

Los Lunas would host a regional on either May 3 or May 4 if they beat Mayfield Tuesday. 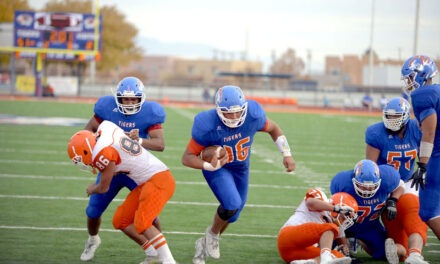 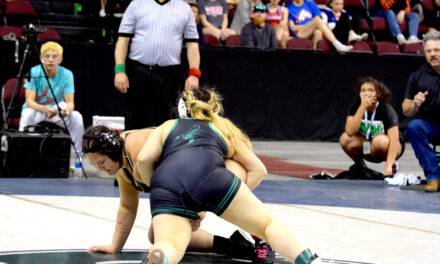