The Free State of Socorro, 1953: Amusing Publicity Stunt or Serious Attempt at Secession? 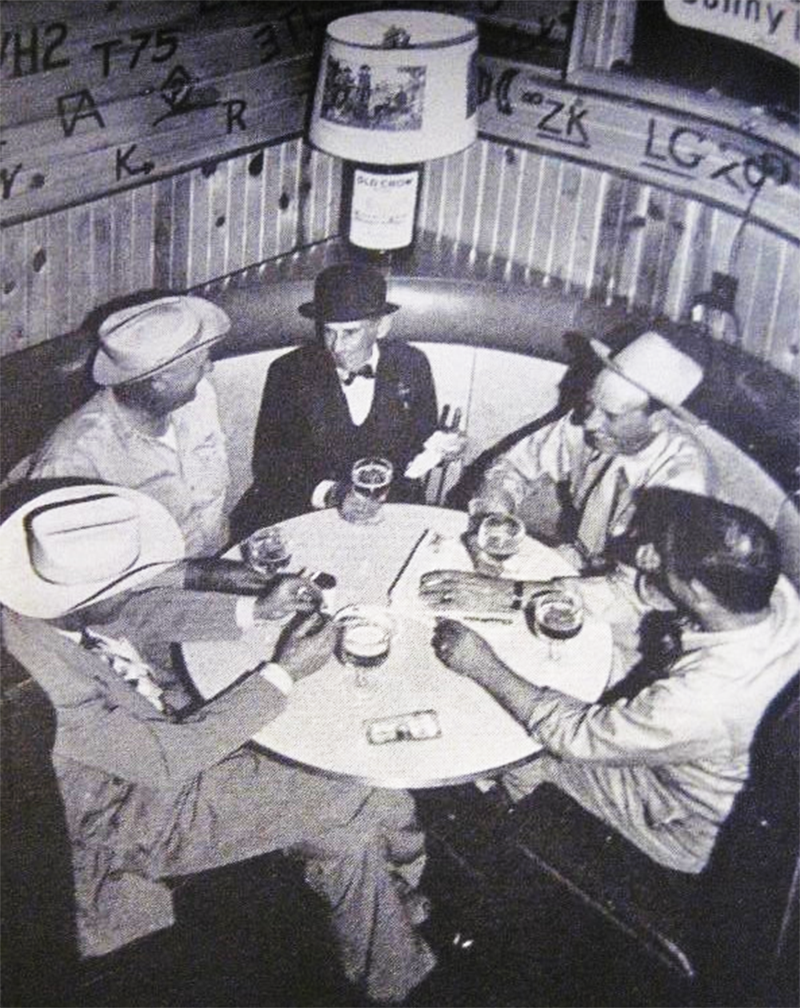 It all began in early 1953 with a simple traffic ticket issued on the dusty streets of Socorro, population 4,300. A 60-year-old plumber named Elmer Brasher had been drinking too much and made the serious mistake of trying to drive.

Police officer Lorenzo Lopez stopped Brasher and cited him for breaking the local ordinance against Driving While Intoxicated.

Socorro city traffic judge Henry Zingerly heard Brasher’s case, found him guilty and fined him $100. That would normally be the end of the story, but in this case it is not.

Instead of simply paying his fine and going home, Brasher hired a lawyer and appealed his verdict to District Court Judge Charles H. Fowler.

Judge Fowler dutifully asked to see the Socorro city ordinance regarding DWI arrests. After a considerable search of the courthouse, the original ordinance could not be found, although a reference to it was discovered in the back files of the local newspaper, the Socorro Chieftain. Someone wrote out the reference in pencil and brought it to the judge.

Fowler was not impressed. Reading the hand-written paper, Fowler found it to be “undistinguishable from mere scraps of paper that anyone might write and scatter about the streets or place in a notebook.” There was no proof that the ordinance had ever been properly drawn up, approved, signed or officially sealed with the city seal.

And if Socorro’s DWI ordinance lacked authority, what about the city’s other ordinances? Did they have any more authority than the DWI ordinance? A March 19, 1953, Socorro Chieftain headline announced the disturbing news that “Socorro Laws Probably All Are Null and Void Says Judge.”

Without city ordinances, some local residents questioned the legality of not only the laws but the city itself. The Chieftain’s editor, Ed Stanton, went so far as to declare, “Nobody’s done anything legal around here since Oñate” and the Spanish conquest of New Mexico in 1598.

News of the lack of city ordinances was disturbing enough, but the plot thickened when curious residents began to look at old maps of Socorro and New Mexico.

Two lawyers, Claron Waggoner and Garnett Burks, could not find any reference to Socorro, Catron, Sierra or Grant counties on the 1848 map drawn at the end of the U.S.-Mexican War. It suddenly seemed that Socorro was a county without a country — or even a territory or state.

Burks, described as a “prominent land attorney,” argued that old maps and documents showed that Socorro was part of the old Cabeza de Vaca land grant dating back to 1820.

Sharing this information with others, Burks claimed that local folks were “dead serious” about determining their own fate and he was willing to fight their case to the Supreme Court if necessary.

The fact that Catron, Sierra and Grant counties were not created until after the American conquest of 1848 and could not have been drawn in that year did not seem to bother those who hoped to grasp the opportunity and determine their own political fate.

Maybe they could create a whole new state, if not something much larger. According to newspapers in many parts of the United States, “The more Socorro people thought about it, the better idea it seemed just to secede from the United States and start all over again.”

By April, the Socorro Chieftain reported “a serious but small group of patriots” had spent much of an evening drafting a Declaration of Independence. 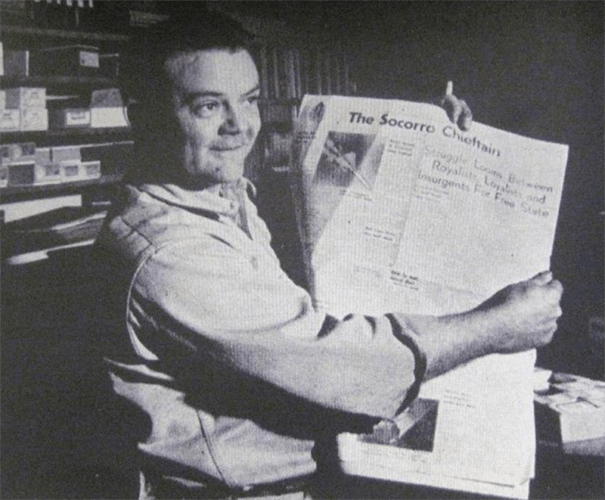 Ed Stanton, editor of the Socorro Chieftain with headlines regarding the Free State of Socorro, Life Magazine, June 8, 1953.

These startling developments got the attention of state officials in Santa Fe. While Gov. Ed Mechem treated the subject lightly, New Mexico Attorney General Richard Robinson ordered his chief assistant to study the case “and determine if Socorro actually can declare itself independent.”

The FBI also dispatched two agents to see what all the fuss was about in Socorro. Apparently, they found nothing to get overly excited about.

Support from near and far

The Socorro Chieftain reported an independent Socorro had many supporters in Socorro and beyond. Socorro’s state Sen. T.C. Jaramillo asserted that secession might be wise because while the people of Socorro paid a lot of state taxes, they did not always get their fair share of the state budget.

Letters of support appeared in both the Chieftain and its rival, the Socorro Defensor. One letter suggested if Alaska and Hawaii were about to become the 49th and 50th states in the 1950s, why shouldn’t Socorro become the country’s 51st state?

Many residents of Truth or Consequences (T or C) and El Paso, Texas, supported secession, although they sought some major concessions. Citizens of T or C wanted their city to be the Free State’s capital city.

The El Paso chamber of commerce offered to make Socorro a part of Texas as it “could hardly do better than to join their good neighbors” to the south. As with T or C, El Paso probably hoped to be the capital of the new political entity.

Having led its independence movement, Socorro was not likely to relinquish the coveted role of capital city, with its courthouse serving as its capitol building. It would be like Canada joining the United States and insisting on Montreal becoming the nation’s capital.

As Socorro’s old rival, Albuquerque opposed the Free State or anything else that gave Socorro an advantage. The two communities continually vied for tourist traffic, with Albuquerque claiming that Route 66 was the best road through New Mexico, while Socorro claimed that Route 60 was the better highway.

Albuquerque instigators even placed signs along Route 60 in Socorro County advertising Route 66 as far superior. Socorro countered by printing pledge cards for its residents to sign, promising not to buy anything in the Duke City.

Attorney Waggoner remained hopeful but suspected the creation of an independent Socorro might fail if “Those Yankees … find something wrong with it.” Waggoner’s reference to Yankees, by which he probably meant the federal government, appealed to many who watched events unfold from afar.

Newspapers in the old Confederate states of the South seemed especially interested in what might happen to the modern-day rebels of a small community in central New Mexico.

Every man a millionaire

Socorro’s leaders were sure that millions of men, women and children would flock to the Free State not only to enjoy diplomatic immunity, but also for the golden opportunity to not have to pay state or federal income taxes.

Local merchants began to advertise their anticipated taxless prices, offering beefsteak for 5 cents a pound, cigarettes for 5 cents a pack, $2.50 for a quart of “good drinkin’ liquor,” 6 cents for a gallon of gasoline, $5 for a pair of cowboy boots and as low as $980 for a new Ford. The Loma Theater predicted that movie tickets would drop from 60 to 20 cents.

And then the Free State of Socorro received the ultimate publicity available in the United States in the 1950s: It got coverage in an article with five pictures and a map in Life magazine on June 8, 1953.

The article reported “The people of Socorro County, New Mexico, have lived for many years according to their own rules. Cattle inspectors complained it was impossible to convict a rustler there. Local courts seemed to make their own laws.” Life concluded that it was natural for the people of such a Wild West county to want to secede from the Union and go their own way. 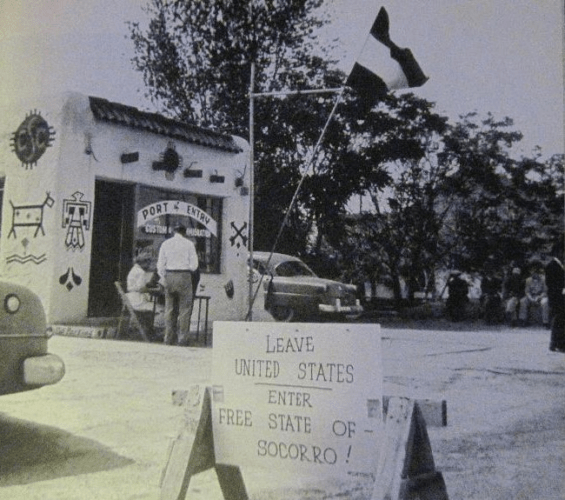 Businesses from across the country began to write to the Socorro chamber of commerce for more details about relocating to this taxless haven. Local businesses were already prospering from all the tourists who came by to see the new state, taking pictures of themselves with visas at the port of entry.

Of course these travelers helped the local economy by staying for a day or two and spending money on goods and services such as gas, meals, lodging and of course souvenirs.

Other get-rich-quick ideas circulated. Some hoped to control the flow of water on the Rio Grande to benefit Socorro farmers. Others favored the creation of legal gambling establishments, envisioning a Monte Carlo on the Rio Grande.

As a foreign country, Socorro could receive foreign aid from the United States. Editor Stanton claimed, “If we get half as much … money as Britain, we’ve got it made.”

This article is a version of a chapter that appeared in the author’s new book, “Years Gone By in the Rio Abajo,” co-edited with John Taylor. Published by the Valencia County Historical Society, the book is available at the Los Lunas Museum of Heritage and Arts and on Amazon.com.

(Part 2 of the “Free State of Socorro” will be published in the April 22 edition of the News-Bulletin. Readers interested in joining the Valencia County Historical Society can contact its president, Richard Melzer, at [email protected]) 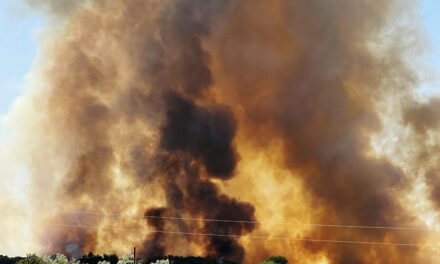 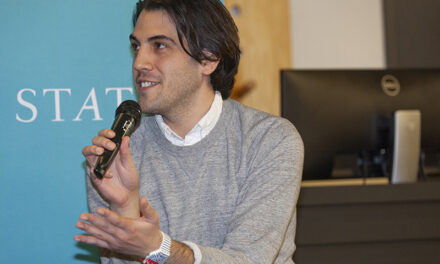