Home » Opinion » Columns » People & Places: The older Geri gets, the more loved she is

People & Places: The older Geri gets, the more loved she is

It’s been a while since I’ve written about my puppy dogs, and there’s a reason for that.

For the past year, my little and oldest pooch, Geri (pronounced Jerry, as in Jerry Garcia), has been having a hard time of it. She’s gotten older and slower, is a bit blind and has canine dementia. We celebrated Geri’s 17th birthday last month. 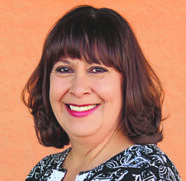 Some days are better than others. She doesn’t play as often as she once did, and those times when she does, it’s only for a few, delightful moments. She’ll enjoy an extended break outside when the weather is warm and she’ll be a part of our pack, prancing after our other two dogs once every blue moon.

It was nearly six months ago that her veterinarian estimated our Lhasa Apso would probably leave us by Christmas. We’ve been preparing ourselves for the day when it happens, as well as waiting for her to let us know when it’s time for us to let her go.

Every day is different. Some days she’s full of cheer and energy, and then there’s others when it seems she just sleeps all day. Christmas came and went and, about a week later, we thought she was close to the end.

But with a slight change of diet and schedule, she got better. She’s never stopped what all dogs do — eating, sleeping and pooping. We also noticed she’s been wandering around the house at night, not really knowing where she’s going. We learned it’s called sun-downer syndrome, or cognitive dysfunction syndrome, which leads to confusion in senior dogs, wandering, getting stuck and other symptoms.

After the holidays and her bout with what we assume was a stomach bug, Geri (or my new name for her, Geri-atric) she got better. Day by day, she perked up. It wasn’t her time.

When the vet told us she probably wouldn’t have more than a few months to live, we decided we were going to make her as comfortable as possible, including not putting her through the anxiety of getting groomed. She absolutely despises it.

As the days, weeks and months went by, her hair and nails continued grow, and it was obvious she was unhappy and just uncomfortable. She was a mess, and she won’t let myself or Matthew trim her hair much less cut her nails.

So for her own well-being, we made the appointment with our wonderful groomer. We were nervous and so was the groomer. We didn’t want Geri to have an unnecessarily traumatizing experience, but her hair was so long it became too uncomfortable for her.

We told our groomer to cut her nails and shave her, giving her freedom from the mop that had developed into a few mats. A couple of hours later, I picked up my Geri. She was shaved, she was beautiful and, most importantly, she was free.

When we returned home, she was a different dog — she was happy, she was energetic and, best of all, she was acting as if she was half her age. For the first time in months, she played with our other two dogs, 5-year-old terrier mix, Kylo, and 8-month-old Lhasa Apso, Jello.

It’s only been a few weeks since she went to her groomer, and she’s just as happy today as she was that first day. I can’t get over how much she wants to cuddle, and even “yell” at me when I’m too slow to either take her outside or give her a treat.

When we first brought Geri home 17 years ago, our children were young and they essentially grew up together. She’s been just like a sibling of sorts to them.

Our Geri, our Kylo and now our Jello are our children. They greet us when we come home, they bug us for cuddles, for treats and for play; they sleep with us, they depend on us and we wouldn’t have it any other way.

I’m not sure how long we’ll have our Geri, but she’s given us her love, her devotion, her loyalty and her trust. She, and the others, are much more than our pets; they’re our family and we are theirs.

A slaughter in Wisconsin

Letters to the Editor Jan. 13)

Letters to the Editor (April 15)

The Art of Getting Through This