Most of the members of the Los Lunas Tigers baseball team weren’t even born when Los Lunas High School last won a district championship.

The year was 1984 and LLHS was then a Class 3A school. The Tigers lost in the state semifinals that year to Taos, 3-2.

But that was nearly two decades ago — an entire lifetime for the players who make up this year’s team. But now they’re making their own history.

“We’re taking it a step at a time,” said Steve Contreras, who is now in his third season as the Tigers head coach. “A couple years ago we started out by having a winning season. Last year we made it to the post season, and this year we stepped it up a notch by winning the district championship. Now, hopefully, we can continue and try to build a tradition. Hopefully, we can compete for the state championship – that’s our ultimate goal.”

The Tigers (15-5, 9-1 in district play) are two games away from the opportunity to compete for the blue first-place trophy. By virtue of their 7-5 win at Las Cruces Mayfield (16-5, 8-3) on Tuesday, Los Lunas won the District 3-5A title and will serve as host to a regional (quarterfinal) game next weekend against the District 4-5A runner-up.

The game will be played either Friday, May 3, or Saturday, May 4. The opponent will be either Clovis, Eldorado or Manzano, with Clovis having the inside track headed into the final few games.

Tuesday’s clincher was pressure-packed from the outset, with the district title at stake.

“It was a hard-fought battle — just what you’d expect in a game like that,” Contreras said. “It was a real tense game, but the boys pulled through.”

The tension reached its peak in the final inning. The Tigers led, 7-3, headed into the bottom of the seventh, but Mayfield cut the deficit in half with a two-run home run by Freddie Lawrence.

Two more Trojans runners reached base off Los Lunas starter Josh Hernandez, who leads the state in both ERA and batting average, brinning the potential winning run to the plate. But Hernandez induced Dustin Dalton to ground out to shortstop Nathan Romero, who made a fine defensive play to end the game.

“We executed when we needed to,” Contreras said. “I’m very proud of them.”

The coach credited Romero and second baseman J.D. Garcia for their solid defense throughout the ballgame. He also recognized Hernandez for pitching a good game, and there were plenty of other accolades to go around.

Contreras said James Alarcon came through with some big hits to score some early runs that gave Los Lunas a 3-1 lead.

With the score tied, 3-3, in the fourth inning, Los Lunas mounted a rally. The Tigers had runners on first and second base and nobody out, so Rael was asked to lay down a sacrifice bunt. Even after he had two strikes against him, Rael put down the bunt. “They weren’t expecting it with two strikes, and they threw the ball away,” the coach said. Two runs scored, and Los Lunas regained the leverage.

The biggest hit of the game came off the bat of Matt Baca. His two-run homer in the fifth scored what turned out to be the winning run.

“It was a fastball, but it seemed like he was trying to get a strike. It was in my kitchen,” Baca said. “It felt like a homer when I hit it, but I wasn’t quit sure. I just prayed that it would go out.”

Baca’s prayer was answered, and so were those of the Los Lunas faithful who have waited so long for a district championship.

Mayfield, ranked second among the state’s Class 5A schools in the latest Albuquerque Journal coaches poll, still makes the state playoffs as the district runner-up. The Trojans will travel to Carlsbad to face the top-ranked Cavemen.

Los Lunas, which was ranked third in the poll, closes out the district schedule with a doubleheader at Anthony Gadsden on Saturday.

“We’ve got to keep some momentum going. Those games are important too,” Contreras said. 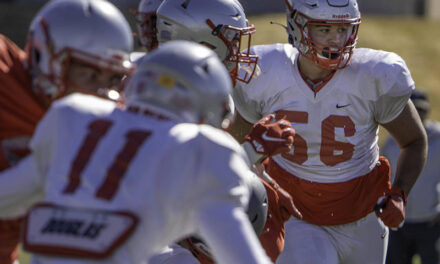 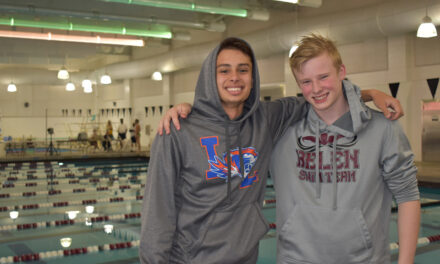