“I think you’ve got the wrong hero.”

That’s how the phone conversation began with one of this year’s Valencia County News-Bulletin’s Unsung Heroes.

“The real heroes are here in this building,” Eric Green says.

We had the right hero. Green, in his humbleness, is referring to the dozens of teachers and staff at La Merced Elementary School in Rio Communities.

What he fails to mention is that since December 2012, he has stood guard over 400-plus students who go there as well as the people who work at the school.

Green, a retired U.S. Air Force sergeant, watched the news and the coverage of the aftermath of the shooting.

“A lot of people were talking about having retired military and police volunteer to guard schools,” he said. “That’s not unheard of.” 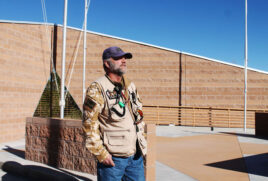 Eric Green, a U.S. Air Force veteran, stands in the Belen Veterans Memorial at Eagle Park he helped to design. The memorial has design elements which honor all branches of the military as well as local veterans who have served our country.
Julia M. Dendinger| News-Bulletin photo

During his time in the service, Green guarded schools in other countries, so the week before Christmas, on his birthday, he went out to what at the time was the only remote school in the Belen Consolidated Schools district he knew of.

“There were a lot of people on edge; one counselor was in tears,” he said. “So, being at the school is working for them and me.”

While stationed in Somalia, Green saw a building mortared. There were nuns and children inside.

“They think they’re helping me but I’m helping myself,” he said.

On that first day, while there were tears, there was also kindness.

“They brought me out lunch,” Green said. “They shouldn’t have done that.”

It just encouraged him to stay.

Joni Roberts is a volunteer at La Merced, where her nephew is a student. She describes Green as a staple at the school, as well as totally professional.

“If you didn’t know he was a volunteer, you would think he was a district employee,” Roberts said of her nominee for Unsung Hero. “He’s known by the kids, so they all greet him. I know he’s broken up fights between parents and will shoo people away when necessary.”

Having that extra set of eyes on the campus gives Roberts a lot of comfort.

“He kind of has that sixth sense,” she said. “He helps with drills and has made some safety suggestions. He’s an extra level of security, a set of eyes looking out.”

Eric Green stands at the entrance of La Merced Elementary, where he volunteers as a security guard.

Green said when initially began volunteering, he was treated like any other visitor to the campus but has since gained the trust of the principal, staff and students.

As a volunteer, Green underwent a background check by the district and there are spot checks done from time to time, he said.

Being a volunteer also exposes him to a certain level of risk, which he is willing to shoulder.

“I know that if I have to engage someone, that’s on me,” Green said.

“I feel like I’ve helped defuse a lot of conflicts, even between parents. I get the opportunity to be an ambassador for the principal; take some of the load off her.”

LME Principal Tanyia Montoya is in her second year at the school and said having Green on campus gives her peace of mind.

“His experience is very valuable to me. He has had training we just don’t get. It’s invaluable,” Montoya said. “I don’t like to say this, especially in a school setting, but I know he will do whatever needs to be done to protect us all, even if that means putting himself in grave danger.”

Roberts said Green does what he does for the kids, helping keep them on track by encouraging good behavior and responsibility.

“Eric was honored a few years ago at the school when my nephew was in second grade. He told me (Green) was his favorite ‘veterinarian.’ I can’t convince him otherwise,” Roberts said, laughing. “Tack on the work he did for the Veterans Memorial and he’s all that and a bag of chips.”

In late 2014, during an early morning Christmas dinner at the DAV Luperto Garcia Chapter 29 Post, former state senator Michael Sanchez was talking to post members about the lack of a veterans memorial in Belen.

Someone threw out the fact that Green was a master engineer in the Air Force.

“He asked if I could draw something up, so I threw together some ideas,” Green said. 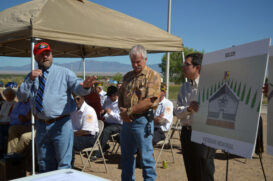 During the ground-breaking ceremony of the Belen Veterans Memorial several years ago, Green described the features of the monument.
News-Bulletin file photo

That led to a scale model of the memorial, which got the green light from the Belen City Council and resulted in the Belen Veterans Memorial in Eagle Park, which opened to the public in July.

While there was press coverage about Green’s participation in the memorial project, his volunteer work at the school flew under the radar.

“I didn’t want the hero thing. The heroes are in that building,” he said. “I’m just in my truck, listening to talk radio.” 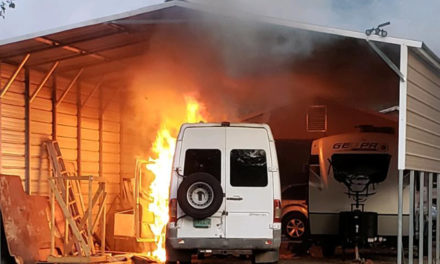 Watching out for others, the right thing