The Valencia County Commission is considering an ordinance that will restrict trucks weighing more than five tons from using Don Felipe Road.

In October 2019, the county spent $308,718 in voter-approved bond funding to repave about 1.5 miles of the road that is in the unincorporated county.

Don Felipe Rode runs south off of the I-25 Bypass in Belen. The first 1.5 miles is in the county while the rest of the road is in the city. 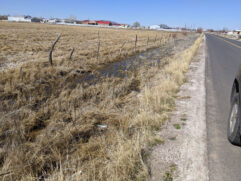 Commissioner Charles Eaton said several residents had come to him after the paving was finished with concerns the work would soon be destroyed by heavy truck traffic.

“Don Felipe has been in dire need of improvements for many years, and the county was recently able to find funding to make that happen,” Eaton said. “When it was completed, a company began using the road to take out large, heavy loads of Jersey barriers from a concrete plant.”

Eaton said it was his understanding that the company, Castillo Ready Mix on Lopez Loop, which is east of Don Felipe, previously took Lopez to N.M. 314 to catch the bypass to Interstate 25.

“From what neighbors have said, as soon as the improvements were made to Don Felipe, they began using it,” he said. “This is deeply disturbing to the residents who are concerned these trucks are going to destroy the road. I went down there on a Saturday, and there were a number of large transports hauling loads down the road.” 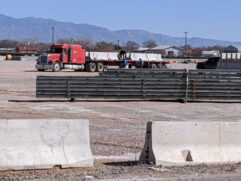 Jersey barriers being loaded for transport at Castillo Ready Mix.

The proposed ordinance, which will go before the commission for a public hearing on Wednesday, March 18, exempts utility vehicles, school buses and emergency services vehicles from the five-ton weight limit.

Commissioner David Hyder asked how deputies would know whether a truck was too heavy.

Eaton noted the trucks transporting the barriers would have to have permits and a bill of lading that should indicate the weight the truck was carrying.

The commissioner continued, saying if a deputy had a reasonable suspicion a truck was over the weight limit, they could pull it over and examine the paperwork.

“If you look at the Don Felipe area, it is swamps. We had to build up the road substantially to stabilize it,” he said. “So when you have large loads and excess weights, it is highly possible that will factor into destabilizing the road we worked so hard on to make stable for regular traffic.” 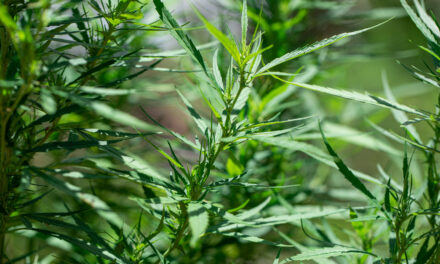