The COVID-19 pandemic has disrupted the lives of people all over Valencia County and around the world, with many people forced out of work, schools shut down and a lockdown put into place, shuttering all non-essential businesses.

However, even in the midst of a once-in-a-lifetime pandemic, there are some things that can’t be paused, and workers are required to keep those businesses that provide food, medicine and other services running.

Even as many others were staying home, people at essential businesses in the county, such as Joe’s Pharmacy in Peralta, were still going to work every day in order to provide their customers with the medications they need. 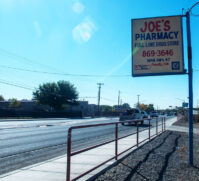 Leon Otero, who owns the pharmacy and is a Peralta town councilor, has been running it for 19 years, and said this was the hardest hit his business has ever been by a national event.

“We’ve gone through slumps before, recessions and things like that,” Otero said. “But this is definitely the hardest hit we’ve ever been.”

Joe’s is a full-line pharmacy, meaning they do more than just fill prescriptions. They also have a full storefront, selling pet supplies, gift cards and countless other products.

Otero said they have seen their frontline sales dip, which he attributes to people staying home as a whole with more and more shopping being done online.

Across the country, between the first and second quarters of the year, ecommerce and online shopping grew by more than 30 percent, according to figures released by the U.S. Department of Commerce in August.

In addition, Otero said business in the pharmacy itself has been down as well, he estimated by about 20 percent, primarily because of customers moving to a use of mail order prescriptions.

“Mail order prescriptions aren’t a new thing, they’ve been around awhile,” Otero said. “But we’ve been lucky that we have a very loyal customer base and most of them have stayed with us. Now, with people trying to go out less, we’re starting to lose some more to it. They’ll often tell us that they’re switching to mail order and that is why.”

However, the other side of the coin for Otero has been that he feels like they’ve retained customers because going to the pharmacy to pick up medications has provided them with an outlet and a chance to get out of the house and have some socially distanced face-to-face socialization.

“Even though it’s just a trip to the drug store, it gives them a chance to get out and interact with some different folks,” he said.

Otero said the biggest adjustment for him and the store was adjusting to the use of personal protective equipment and setting up barriers.

“Initially we were probably a little more relaxed about it than we should have been,” Otero said. “But now we’ve adjusted to it being around and are glad to have it.”

So far, there haven’t been any direct exposures at the pharmacy, which he is thankful for, although that uncertainty is always hanging over the store.

“When someone comes in for allergy medicine and they’re sniffling or sneezing, you can never really be sure if its allergies or if it might be the virus,” Otero said. “But so far, we haven’t had any cases of it come through even though there have been some here around in Bosque Farms.”

Otero said they have been told testing will be opened up to them within the workplace soon, but he wasn’t certain yet whether they would take advantage of that.

Another industry that has continued to operate through most of the pandemic is restaurants and while the restrictions having changed plenty of times, with indoor dining being opened and shuttered as case counts climbed and fell. 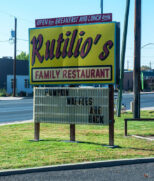 Rutilio’s in Los Lunas, which is open for takeout, indoor and outdoor dining, has rolled with these changes and been open for whatever is allowed since the pandemic began.

Currently, under the state guidelines, the patio is allowed to be open at 75 percent of capacity, while indoor dining is open at 25 percent for restaurants that have passed the New Mexico Safe Certification training program, as well as for carry out and take out service.

Last week, Rutilio’s announced they would be remodeling their patio, which wraps around the outside of their building.

In July, staff participated in a #LetUsServe protest following the closure of indoor dining for a second time following a spike in cases, arguing the restrictions were hurting small businesses. 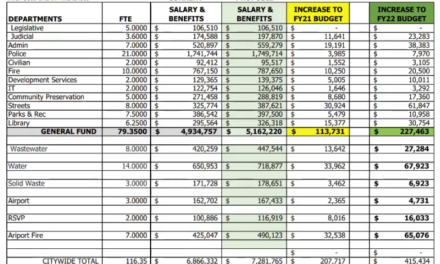 Population increase not as high as expected