But, but after the events of September 11, it carried added meaning — especially for some of the Vietnam veterans who were asked to help carry the 60-foot long American flag down Main Street.

“For me, it’s an honor to be there, especially these days,” said Michael Otero, 50, a Vietnam veteran and one of the flag bearers.

“We’re all out there as people — no differences,” Otero said in a post-parade interview at VFW Post 9676. “It’s a great feeling to be out there and to have the respect of the community.”

Even the Pueblo of Isleta had two Vietnam veterans marching in the parade — Marcus Lujan, 51, U.S. Army, and Ulysses Abeita, a Marine.

“I felt proud to march in the parade,” Lujan said. “We have about 200 veterans in the pueblo.”

When asked about how veterans felt after the events of September 11, Otero spoke confidently.

“After 9-11, we all wanted to get our rifles and go,” Otero said. “All of my friends felt the same thing. We are old, but we can still do something for our country. I can still shoot the way I used to.”

Otero remembers signing up for the Marines before graduating from Los Lunas High School.

“Two weeks after we got out of high school, we were over there,” he said. Born and raised in El Cerro, Otero served in the Marines First Division and even signed up for a second tour in Vietnam.

Otero’s brother, Andy, served in the Navy for 13 years, including time on a supply ship during Desert Storm. The two brothers currently work together in the county as contractors, installing floors and carpets.

“When my brother went to Vietnam, that’s what inspired me to go into the service,” Andy said. “I figured, if he could go fight for our country, so could I.”

Andy’s grateful that all of his courses at T-VI in Albuquerque were paid for through the GI Bill, and that he got to see the world through his Navy travels.

Francisco L. Lujan, commander of Post 9676, had a purpose in asking Vietnam veterans, along with other veterans, to help carry the flag on America’s 226th birthday.

“When we get a Vietnam veteran, I like for them to be in the parade,” said Lujan, “It gives them a sense of pride. They can take pride in wearing the uniform again.”

“I’m the youngest member, but I treat the older members with a lot of respect, and I think they return that,” said Lujan, who walked the entire parade route with his son, Daniel, selling poppy flowers to support the veterans.

“To us, it’s always meaningful, and, for Americans, it’s even more meaningful,” said Lujan, when asked what it was like to march in his tenth Fourth of July parade. The Los Lunas parade came at a time with the skies over 12 U.S. cities were patroled by Air Force planes due to heightened warnings of a possible terrorist attack.

World War II veterans are currently dying at the rate of 1,000 per day, Lujan said, and with them goes an entire era of history.

Amador Griego, 72, one of the post’s WWII veterans, carried the flag with special memories after September 11. Griego served in the Army for 22 years. The former Post 9676 commander also worked for the U.S. Defense Department for 22 years.

When these veterans pass away, a large chunk of living military history goes with them. Then, only the history books and those who knew them will remember. 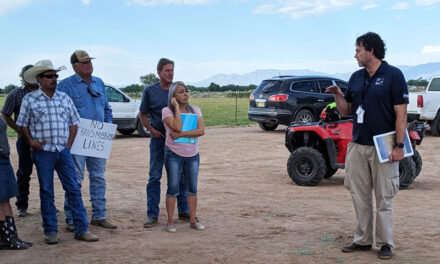 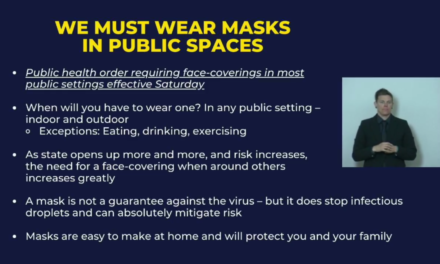 State to use emergency alert system for important communications