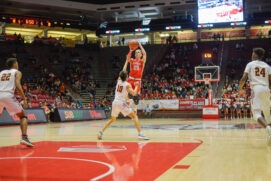 Jake Mattox, seen here in action against Valley in the state tournament, will represent Valencia in the All-Star game on July 29.
News-Bulletin file photo

The New Mexico High School Coaches Association all-star teams for boys and girls basketball were announced earlier this week, and Los Lunas and Valencia will both be represented in Albuquerque in late July.

Mattox started for the Jaguars this year as the team made history and earned a trip to the Pit for the first time in school history before falling to eventual state champion Valley in the quarterfinals.

Mattox also earned a place on the 5-4A All-District first team, as well as a second-team placement on the 4A All-Metro team.

The boys game will be played at 8 p.m. on Wednesday, July 29 in Albuquerque, though the exact location of the game is still to be determined. Tickets will cost $8, an awards ceremony will precede the game. Michael Nanez, the head coach of Onate High School, will coach the team.

Ross earned her place on the team after helping the Tigers to their third straight state championship this season. She played all over the floor for LLHS, regularly seeing time as a shooting guard in addition to in the post. 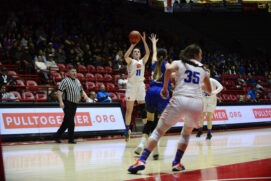 Dani Ross has been named an All-Star in the big school south division and will compete in the All-Star game on July 29 in Albuquerque.
News-Bulletin file photo

In her final game as a Tiger, Ross led the team on the glass with eight rebounds in addition to 11 points.

She finished her career with five state championships, two in volleyball, three in basketball.

The girls game will be played just prior to the boys and is scheduled at 6 p.m. on Wednesday, July 29, at the same to be determined location.

Lonnie Neal, the head coach at Highland High School, will lead the South.

Originally, the games had been scheduled to be played in Las Cruces in early June, but the COVID-19 pandemic caused them to be pushed back to July and moved to Albuquerque to coincide with the annual coaches clinic.