BELEN — A crowd of a few hundred, mostly maskless people, gathered on Becker Avenue in Belen Sunday evening to praise God and declare they were putting “faith over fear.” Julia M. Dendinger | News-Bulletin photos
Members of the crowd gathered for the Faith Over Fear protest Sunday evening in Belen declared their faith in God and his ability to protect them during the pandemic.

The protest, which was organized by more than half a dozen local churches, featured local religious leaders delivering sermons, prayers and a praise band leading the crowd in song.

“This is to help give voice to the body of Christ,” said First Assembly of God Pastor Greg MacPherson. “Church is essential.”

When the pandemic first hit in March, local churches offered help to the community through food, cleaning supplies and the once scarce toilet paper.

“But then something dangerous and dare I say diabolical began to happen,” MacPherson told the crowd. 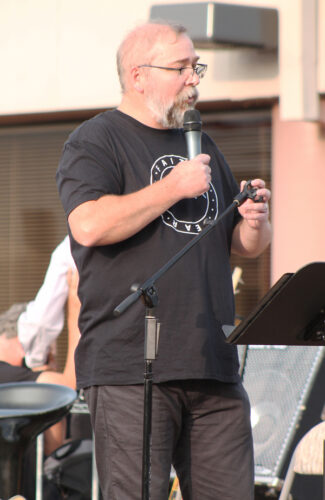 First Assembly of God Pastor Greg MacPherson speaks to a crowd of nearly 300 people Sunday evening during the Faith Over Fear protest in Belen.

As the virus has disrupted lives, it has also created fear in people, he said, asking those gathered to think about the challenges in their community.

“Think about the root cause — fear. People have become afraid to go see their families, go to the store, go to church and take communion and have baptisms, afraid to live, he said. “It was God who anointed a young boy who defeated a 9-foot giant with nothing but a slingshot, who protected three young men from the fiery furnace. And I say here, today … no more, no more, no more. We are the church, not some wimpy social club.

“Jesus is bigger than the virus. Bigger than any fear you could face. Worship Jesus and sing without reservation — you have protection fully in Jesus.”

Arden and Irene Donbleyker of Belen joined the crowd of worshipers that evening, saying they were there to worship with their fellow Christians and support the community.

“We wanted to worship with a lot of other people, believers,” Arden said. “Things have been shut up too long.”

Irene said the different churches coming together was to a way to help and encourage each other.

“I love this community. I want to build up Belen,” she said. “It’s time to come together with other believers, other Christians, as we worship as one.” Prayers, songs of praise and sermons at the Faith Over Fear protest Sunday evening in Belen moved many in the crowd of hundreds.

Staff members at Grace Fellowship in Los Lunas, Caleb Proctor and Brandon Gonzales are the guys behind the scenes who helped the church pivot to streaming services when churches and houses of worship were ordered closed earlier this year.

“We’re here to worship and come together,” Proctor said. 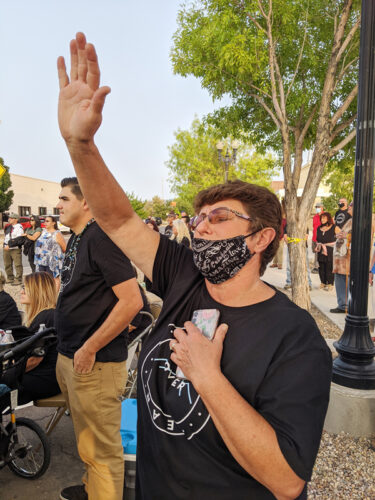 Prayers, songs of praise and sermons at the Faith Over Fear protest Sunday evening in Belen moved many in the crowd of hundreds.

Gonzales said he believed it was necessary for groups of any faith to be together in public places.

“People need the church, what it provides,” Gonzales said. “To some people, church might be essential.”

He said the protest seemed to be driven by the fact that churches weren’t allowed to reopen at the same capacity as other businesses and organizations when restrictions began to ease.

Churches are now allowed to have in-person services at 40 percent capacity.

“I never thought overnight we’d be told you can’t go to church,” Gonzales said. “But that’s what happened.”

Pastor Ray Jaramillo, Calvary Chapel Rio Grande Valley in Belen, said the event was a protest against the spirit of fear.

“I believe the church has a purpose in the days we’re living in,” Jaramillo said. “The church is always the one that stands in the midst of the war.”

Jaramillo acknowledged people can worship at home but said coming together to worship is something Christians are commanded to do.

“This is the time for the church to stand up and come together and in doing so, he gets all the glory,” he said. 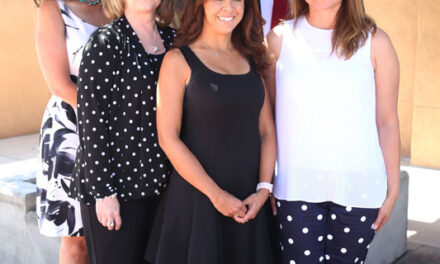