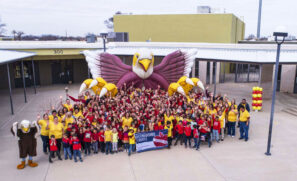 Gil Sanchez Elementary has been named a National Blue Ribbon School for 2020.

Gil Sanchez Elementary, home to about 300 kindergarten through sixth-graders, was named a National Blue Ribbon School for 2020.

To even compete for the honor, a school has to be nominated by its state public education department, said GSE Principal Carla Martinez.

“This is so exciting, something we’ve been working towards, especially since you can only apply after you’ve been nominated,” Martinez said. “This is a coveted award that will be tied to the school forever.

“It’s been a transformational process under former principal E. Renee Sanchez and then her handing things over to me. We’ve been able to continue and sustain what we’ve been doing. The staff is incredible and hard working, even through this pandemic, we’re trying not to miss a beat.”

Gil Sanchez Elementary was one of three New Mexico schools to receive the Blue Ribbon honor this year, and was recognized as an Exemplary Achievement Gap Closing School.

The other two schools were Pinon Elementary in Santa Fe, also in the gap closing category, and S.Y. Jackson Elementary in Albuquerque, in the Exemplary High Performing Schools category.

The recognition is based on a school’s overall academic performance or progress in closing achievement gaps among student subgroups.

“Our very own Gil Sanchez Elementary School received one of the most distinguished honors a school can attain,” said Belen Superintendent Diane Vallejos. “It is amazing to see that Gil Sanchez will be nationally recognized for all their efforts and success. Congratulations to Principal Carla Martinez, staff, students, families, and all those who have contributed to the success of this school.”

“We recognize and honor your important work, preparing students for successful careers and meaningful lives. Last spring, great school leaders pivoted and kept learning going for their students as health realities disrupted everything,” DeVos said. “They are examples of how great school leaders, great teachers, community leaders and families can rise to the challenge and do the next right thing for students.

“Congratulation on your students’ accomplishments and for your commitment to their futures.”

In 2019, Gil Sanchez was chosen as one of two schools to represent New Mexico as a National Title I Distinguished School.

GSE was one of 73 schools nationally recognized for academic achievement in 2019 with the National ESEA Distinguished Schools Award. The school was recognized under Category 1 — exceptional student performance and academic growth for two or more consecutive years.

Under the leadership of former principal E. Renee Sanchez, GSE’s school grade improved from a C to an A for the 2016 school year, and it maintained that A for the 2017 school year.

In the Blue Ribbon application, Martinez wrote about the school various community organizations that provide physical, social and emotional support for its students.

“The programs our students are involved in extend and compliment work being done by teachers and parents,” she wrote. “The practice that helps Gil Sanchez Elementary stand out is the unified understanding that we must ensure excellence in all we do because all students have capacity to reach their goals.”

The staff’s mindset is that a strong focus on standard driven instruction and high expectations for all students will ensure success, the principal pointed out, and the culture of high functioning teams and on-going examination of student work allows them to focus on each child individually.

“Each student has goals they are striving for. Our students can articulate their goals to all stakeholders,” Martinez wrote. “They too believe that they can reach these goals and know that they have the capacity to do so with hard work and perseverance.”

Since 1982, the National Blue Ribbon Schools Program recognizes public and private elementary, middle, and high schools based on their overall academic excellence or their progress in closing achievement gaps among student subgroups.

Now in its 38th year, the program has bestowed almost 10,000 awards to more than 9,000 schools, with some schools winning multiple awards.

With the Blue Ribbon honor, GSE will be able to display the National Blue Ribbon School flag on its campus.

The 2020 National Blue Ribbon Schools Awards Ceremony will be held virtually Nov. 12 and 13. 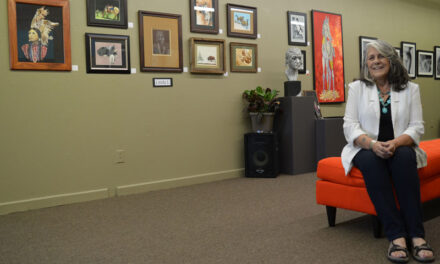