Highland Meadows fired up for training

It used to take firefighters more than half an hour to reach a fire or emergency in Highland Meadows — the nearest fire station in its district was in Los Chavez, 35 miles away.

Residents of the community of about 600 people tell stories of homes burning to the ground, folks losing everything they owned, simply because firefighters were so far away.

However, after years of planning and waiting, the Highland Meadows Volunteer Fire Department has officially formed and taken action. The proof came last Saturday as the department held one of the first training sessions for its 26 volunteer firefighters.

“I feel like it has finally come together; tonight, it looks like we’ve finally got some commitment,” Fire Chief Carl Backstrom said.

The idea for the fire department arose nearly five years ago. In September, 2000, a group of volunteers and planners officially came together, and, by the next February, the state recognized it as a probationary department. By next February, according to Backstrom, if everything is in order, the state will declare the station official. “We’re working on having all the pieces of the puzzle put together for the February inspection,” he said.

Backstrom said getting the department together was a struggle, but “starting anything that’s worthwhile is a struggle.”

Backstrom had previous experience as a firefighter in Edgewood, where his father was fire chief. “If skill doesn’t come from direct experience, I hope it’s in the blood,” he said.

County Fire Marshall John W. Cherry said of the development of the department: “It’s been a long time coming.”

Funding and organizing for the station has been a cooperative effort of many people, according to Cherry.

He said money from the county fire excise tax has helped the department take root.

Cliff Hammond, landowner and proprietor of Cliff’s Amusement Park, donated the property on which the station will be built. Legislative funding of $50,000 from State Sen. Michael S. Sanchez (D-Valencia County) was recently granted for construction of the station, which will begin in July.

The department acquired a fire truck from Valencia County and has purchased or acquired by donation equipment such as gear for firefighters to wear, as well as tools such as shovels and picks. However, the department is still seeking donations. Backstrom said, “There are so many things required to be a functional department.”

Perry Randall, Highland Meadows Resident and volunteer firefighter said, “We’ll take anything we can get — money, building material, anything.”

The training, which took place at the site of the future fire station, involved a “Christmas tree” composed of pipes that shoot out propane gas and is then lit on fire. The goal of the firefighters was to put out the fire as quickly as possible. Cherry said this type of training allows volunteers to “fight real fire and gain knowledge and confidence in a real emergency.”

Volunteers from seven other districts were present to help the department and to receive some extra training for themselves.

Though the fire-tree training procedure is commonly used, Cherry said it is “a dangerous type of training.”

Flames from the tree reached 20 feet high and extended 14 feet out. The fire’s heat could be felt at a distance of 50 feet away.

Though a dangerous situation, no paramedics were present at the scene. In one incident, spectators gasped as they witnessed Cherry suffer a fall. One of the gas valves in the tree was left on by mistake, and Cherry suffered a blow from the heat and pressure.

Cherry was not injured, however, and said, “I just had to put on a show.”

The fire tree was not the only training element of the day. Earlier Saturday, volunteers were sent out amid lightning and thunder when someone claimed to have seen smoke. However, this proved to be a false alarm when the “smoke” turned out to be just clouds, according to Backstrom.

“I guess it’s been so long since it’s rained that it scared people,” Backstrom said.

He said the he was proud of the firefighters and all the volunteers for reacting so quickly.

Backstrom said more training will be planned for the volunteers soon. 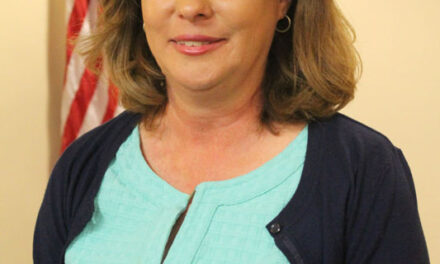