Let me start off by saying that this concert proved to me that a band’s music does not have to be good live as long as it can put on a great performance.

Ill Niño was the first mainstream band to take the stage, followed by Coal Chamber. Both bands rocked the theater and had the kids crowd-surfing and moshing to songs that could not be understood. You could feel the heat from the crowd rising in the theater as some of the concert-goers pushed and forced their way forward to get as close to the stage as possible, while others sat at a distance and enjoyed the beat of the music pounding in their chests.

I started out on a platform behind the main floor and watched people getting tossed into the air and passed around until they made their way up to the stage to be pulled out of the crowd by security and then run back into the crowd to do it again. I could feel the energy of the crowd, luring me to get into the concert by which I was not yet impressed. The bands were not those that I was used to listening to, and I had trouble understanding anything that was being screamed at me. The only thing that came out clearly was when the music stopped and the lead singer screamed obscenities and promoted something that most parents would not want to know about. As I finished taking pictures of Coal Chamber, my friends and I made our way up to the balcony. Once there, I felt I could enjoy the concert. From there, I could actually see what was happening below (you see, I am very short and cannot see well in a crowd). I found a chair and stood on it to watch with a bird’s-eye view.

Now for the headlining band, Drowning Pool. This band rocked! They were the best part of the concert. I understood what they were singing; they sounded like they do on the radio. I felt like an actual band had finally taken the stage. Again, I watched from above, impressed with the number of people in the crowd. It grew and became more and more rowdy as the band played on. Again I could see concert-goers crowd-surfing and moshing. “OK,” I thought to myself, “it’s time to get into the action.” I dragged one of my friends back downstairs and through the crowd as far as I could get. Somehow we became the center of a mosh pit (for those of you who do not know, a mosh pit is a circle of people jumping around and slamming into each other). We had to get out but couldn’t move any further than the barriers of the pit. So we stayed put and helped push those that ran into us back into the pit. All this time, the band played on as we jumped to the beat and became a part of the concert. Before I knew it, the band was saying good night. The crowd started yelling and then chanting “Let the Bodies Hit the Floor”! – the title of the song that hit the charts as soon as it hit the airwaves. The lead singer hushed the crowd, then asked, “Did we forget to play a song?” The crowd screamed “YES!” The lead singer then started whispering into the microphone, “Let the bodies hit the floor, let the bodies hit the floor, let the bodies hit the FLOOOOR!!!” The crowd went nuts and sang along with the band, jumping and waving their hands in the air.

As soon as the band left the stage, the theater started to clear out almost immediately. As I made my way toward the door, I noticed some people following someone that appeared to be signing autographs. We scurried to see who it was. It was the lead guitarist of Drowning Pool! He helped lead the crowd out of the doors as he continued to sign his name to whatever was shoved in front of him. As I left the theate,r following him, he looked right at me and beamed me a smile. Wow, I thought, he must really love what he does. What a great ending to a concert that didn’t start out so great. I will definitely go see Drowning Pool the next time they perform in the Duke City. 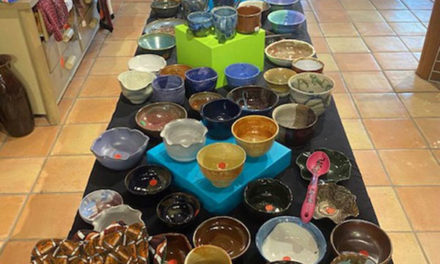