A marriage between academics and athletics is about to give more students an edge at Los Lunas High School, thanks to a new video editing system.

The Los Lunas School Board voted unanimously Tuesday night to approve the purchase of a video editing turnkey system from Solutions Integrators in Albuquerque for just over $18,000. The money will come from the high school’s athletics fund.

To begin with, the district will purchase two cameras and move up to a total of six to eight cameras over the next several years.

The idea for the change to an all-digital system came when the LLHS athletics department began taking inventory of where it stands equipment-wise compared to other programs throughout the state.

Right now, the coach sits down with his players and designates students to watch separate sections of video taped games. Teammates study different areas in the game, like three-point plays and defense, as a learning tool for improvement.

Now they can take it to the next level, says Athletic Director David Atencio, who will facilitate the program at LLHS.

“The new system is beneficial. Students don’t have to wait through two hours of video. It’s very quick,” he said.

“I’m an advocate for moving towards making athletics more a part of the school. We share student achievements in our announcements. We’d like to involve athletics even more.”

Besides being a benefit for athletes and coaches, the program will allow Rick Cole’s journalism students to do the editing for sports events and games.

“There won’t be any idle time. Students will be able to work with the system and utilize it,” Cole told the members of the school board.

Cole will oversee the students’ use of the new system, which, he says, is an extensive operation for high school students and the district as a whole. Last year, the high school moved into a new facility where the campus station, KTGR, voiced and edited tapes for local games.

Students currently send out video tapes to colleges across the country as an opportunity for athletes and seniors to let their voices be heard.

“This is the very beginning. The digital system puts us ahead of the game. Our students can get a head start in the industry by being able to use this equipment. The students get excited with just the mention of it.”

The possibilities are endless with the help of the high-tech editing system, Cole says. The Fine Arts Department will be able to use the new equipment. In the past, students have often made requests to tape their music solos or theater performances. Now the Mock Trial Team will be able to review their competitions again and again.

“We don’t want the coaches or the students to be afraid. This equipment will enhance the students’ work in cinematography as a superb training device. Think of what a wonderful P.R. tool this could potentially be for the district,” Atencio said.

Board Member Nancy Seemann said the exciting ramifications of the new equipment will allow students to put their editing skills on display in their portfolios. “Students will be able to burn their work on a CD and say, ‘here’s the work I’ve done.'”

Cole is laying the foundation with his current production classes. 42 students in the second and first sections of the course are gaining more experience, and a large number will get to start working with the new equipment by the end of March.

“There will be six to eight core operators. It’s a taste of the real world. It’s not very often that a person who does the video shots does the editing,” Cole said.

The cameras require great care, and Cole said the students will do everything they can to protect the equipment. “We haven’t spent anything on expenses for maintenance or repair,” he said.

“Analog is obsolete. By the time we unpack this equipment there will be a newer version of it out. But I think the editing process we will be using is so updated that the new software won’t become obsolete.” 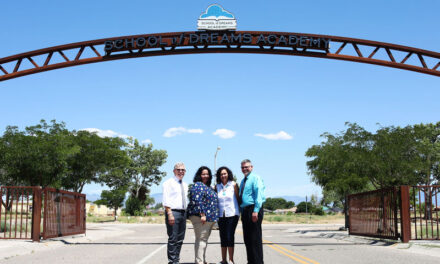