LOS LUNAS — A local family recently held a donation drive to benefit patients through the Carrie Tingley Foundation and Child Life, as those organizations benefit their own family.

Makenzie Gibson had her seventh birthday party at Mitchell Theaters in Los Lunas last month, which is the first birthday that she was able to celebrate without having to worry about surgeries or recovery time.

Makenzie Gibson, left, recently held her seventh birthday party, which is the first birthday she was able to celebrate without having to worry about surgeries or recovery time.
Submitted photos

Her mother, Jocelyn Gibson, said Makenzie has significant medical needs — needs that have been around since she was born.

“She has two rods and 10 screws holding her spine together because of her scoliosis, so we can’t do things like jumpers,” Jocelyn said. “Having it at the theater made it easy to get everyone together, sing ‘Happy Birthday’ and then have everyone go their own way but still have people there for her.”

Makenzie has to get the rods in her back lengthened to match with her growing body. The rods are good for about two years and then have to be replaced with newer ones that can grow a longer distance. Makenzie is now at that two-year mark and will be having another surgery this summer.

“This is something else that the Carrie Tingley hospital has done for us,” Jocelyn said as she gestured to the device in Makenzie’s hand that was playing pre-recorded common phrases. “They helped us purchase this communication device, which has allowed her to have a voice, and I’ll always be grateful for that.”

The community has helped in numerous ways, something Jocelyn and her family will always be grateful for.

“This community has been phenomenal. We’ve had complete strangers pay my mortgage payment when we were hospitalized; the schools did a fundraiser when she had a really big surgery. People who I don’t even know to this day pulled together and helped this little girl,” Jocelyn said.

The family pays it forward in any way that they can, whether it be helping someone pay for their groceries or paying for someone’s gas if they are shortchanged. This is what inspired the donation collection for Makenzie’s seventh birthday party.

They told their family the idea to have the party and collect donations for the hospital, and their family encouraged them to share the idea on Facebook with friends.

“Once I put it on Facebook, it expanded so much. We had friends, teachers and principals and just anyone who’s had an experience with Makenzie in the past pull together,” her mother said.

“The movie theater was phenomenal,” Jocelyn said. “Having a kid with special needs is tough; there’s so much good but there’s hard times, too. To be able to have a safe place where kids can be themselves and not have to conform to those societal norms is a neat thing to have.” 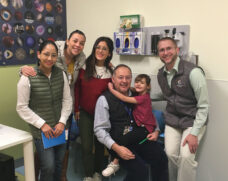 Makenzie Gibson has been treated at the Colorado Children’s Hospital. Pictured are the staff who helped with the treatment she received.

When she was born, Makenzie had between eight to 10 holes in her heart, and was quickly diagnosed with congenital heart disease on top of that. They were sent home with Makenzie on oxygen, and were told that because of the holes in her heart, it would be difficult for her to eat because her heart was having to work much harder. Eating left her fatigued and, in turn, made her gaining weight a struggle.

“We have an old-school pediatrician whom I am so grateful for because he really coached us through how to support her in her eating without having to put in a feeding tube,” Jocelyn said. “I firmly believe that kind of helped save her because a lot of times once kids have that feeding tube, they don’t have to learn to work as hard because they get what they need immediately.”

They went to a nutritionist to make sure Makenzie was getting everything she needed. The family was referred to a neurosurgeon and geneticist. The neurosurgeon diagnosed Makenzie with microcephaly, which means the circumference of a baby’s head is significantly smaller than usual because of abnormal brain development.

An MRI was done to look at her spine, and she was diagnosed with sacral agenesis, which means her spine never fully developed.

“Her spine stops between L-5 and S1, approximately. It’s a little contorted because she doesn’t have a sacrum and she doesn’t have a coccyx,” he mother said. “That has a lot to do with her tone and her lower mobility, and explained why she wasn’t crawling or walking.”

At around the same time, the geneticist diagnosed Makenzie with a chromosomal disorder called 7q36. The 36th band of chromosome seven was completely deleted.

“Over 99 significant genes all having to do with growth and development are not a part of her DNA. That explains a lot of her delays. She’s a very rare case; there’s not any kids that are published with her same diagnoses.”

The family was told at the time of diagnoses that she was the only reported case in the world with her exact deletion. There were 11 people studied prior to her with similar cases but not an exact match.

“With as many doctors as we have to see, I’ve learned to educate myself as much as I can and take everything with a grain of salt,” Jocelyn said. “It helps us to understand her better, but it doesn’t define who she is.” 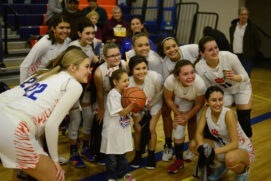 The family finds comfort in connecting with families via Facebook with children in similar situations. Since then, Makenzie has been diagnosed with one or two big diseases or conditions every year of her life.

“In the beginning, it was hard. I think every parent has this idea of their child is going to be,” Jocelyn said. “When you’re not prepared, you kind of go through the whole grief process for the loss of the child you thought you were going to have and it can be very overwhelming.

There was a point early on when Jocelyn didn’t want to go to the hospital anymore.

“I broke down,” she said. “Every time we would go, they would keep telling me there was something else wrong with my child.”

Their geneticist gave her the best advice anyone has every given her. At the time she loathed the answer, but it’s stuck with her through the difficult times.

“He said, ‘Your little girl is the same little girl five minutes before you received this information. I know you want me to tell you if she’ll ever walk or talk, but I can’t do that because if I tell you she can’t do something, then you will expect that she can’t and you’ll never push her. If I tell her you can do something and she ends up not being able to, you’re just going to be devastated all over again.’”

“Now we don’t have any expectations; we just constantly push her and support her to be the best that she could be,” Jocelyn said.

Makenzie has been treated at the Colorado Children’s Hospital, and Jocelyn remembers one instance when a doctor there noted how his expectations of her had changed.

“He said, ‘I was prepared to come in here and see a kiddo who is non-verbal, non-ambulatory and is completely dependent on you for every aspect of her life. I was not expecting to see a little girl to be full of energy and sass and spunk and trying to move around.’”

The family hopes to make the donation drive an annual event to benefit local patients and families.

“I want to say a huge thank you from the bottom of our hearts to everyone who has stepped up and helped,” Jocelyn said. “Their efforts do not go unnoticed. What they do when they choose to show kindness has a ripple effect that just keeps going. It reminds us to see the good that is in this world.”

For more information on the organization or donations, visit CarrieTingleyHospitalFoundation.org. 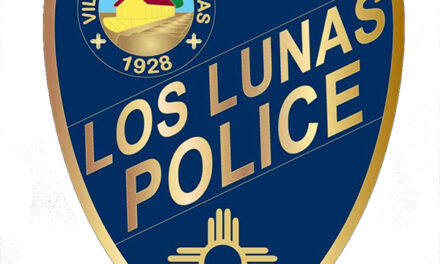 Bosque Farms employees get raises; GRT to increase in 2020