In this week’s report, Dustin introduces New Mexico angler and weekly fishing report contributor Eric Ockerhausen. Most weeks, Eric’s reports are purely informational as photo ops can be hard to come by when you’re in a kayak and don’t carry a phone or camera. Eric loads into his one-man, inflatable fishing kayak and usually catches quite a few fish.

Eric likes distancing himself from the crowds while enjoying the solitude of being on the lake. Social distancing has always been high on Eric’s priority list, even long before COVID-19. This week, he shares some of his kayak fishing tips and tricks.

Eric emphasizes that a kayak is good for social distancing and good exercise. He has found it to be very enjoyable and urges others to give it a try. He says the nice thing about fishing in a kayak is that as you paddle around and get great exercise while also enjoying a day outdoors, whether the fish are biting or not.

Rather than paddle around, float and cast, Eric prefers to troll a lure. He has had good success using the trolling method and appreciates the exercise.

There are two types of kayaks that people can buy, hardshell and inflatable. Hardshell kayaks are ridged whereas inflatables can be deflated and folded.

Eric uses an inflatable kayak because he does not have a good space to store a hardshell kayak nor a good way to haul one. Eric can fold his deflated kayak and transport it in his car. Once at the lake, he can setup his kayak and be ready to get in the water in about 10 minutes.

Trout fishing was new to Eric when he moved to New Mexico from the Midwest. He did quite a bit of research to identify what lures would be best trolling for trout. Through trial and error, Eric has found that small Rapala lures, yellow spinners and Pistol Pete flies work well for him.

Eric says not to go out and do the same thing all day and then complain that the fish are not biting. If you are not having any luck after 20 to 30 minutes, change lures, change depth or do both. Keep doing things differently until you find out what is working for you. He also suggests that you change the speed you are trolling but notes that can be tricky from a kayak.

Once out onto the lake in a place he wants to fish, Eric makes a cast to his side or behind him. He then places the end of the spinning rod and reel between his feet.

He lets out fishing line until he has enough line out to reach his desired depth.

The fishing rod points towards the rear of the kayak and rests under his arm so that is does not interfere with his ability to paddle. The line is then trolled directly behind the kayak.

Eric says that it does take a little while to get accustomed to and you must pay close attention to your fishing rod. But eventually, knowing when you have a fish on the line becomes natural. That is something you will have to learn. It is also a little different landing a fish from the kayak. This all gets easier the more you do it.

Eric says that when purchasing an inflatable kayak, he prefers one that has everything you need included in a package, the pump, paddle and accessories.

You will still need to get a life vest and Eric insists he would not go kayaking alone. Also, a lanyard is a good purchase to make so that you do not lose your paddle. As Eric says, “you don’t want to be up … creek without a paddle.”

No matter what type of kayak you get, you need to check on the size of the cockpit. The cockpit is where you sit. It is usually not very big and you want to make sure you can fit inside it so that you are comfortable, since you will be spending two or three hours in it at a time. Eric is 6-foot 2-inches tall and he was able to find a kayak that he could stretch out and be comfortable in.

Many large and specialty sporting goods stores sell kayaks. Call ahead to find a store that will allow you to get in and test the comfort of the kayak before making a purchase.

If you order something online, you will need to research and check the specifications for the kayak. Some of the cockpits are not very big and the reviews might still say that a person 6-foot 4-inches has plenty of leg room.

So, if you are making an online purchase, it is a good idea to do your research.

Kayak maintenance is fairly easy. Do not store them wet. Eric dries out his kayak before loosely folding and put it in its storage tub. This is Eric’s third year with an inflatable kayak and his is still going strong.

One tip Eric plans to incorporate into his program this fall and winter is to wear waders so that his feet and pants won’t get wet from the water dripping from the paddle.

Give kayak fishing a try. Eric thinks you will enjoy it.

Trout in a skillet

Eric says his favorite trout recipe is from Alton Brown of Good Eats.

Flour, salt and pepper the fish.

Put enough oil in the skillet to fry a fillet.

When the oil is hot, add a plug of butter for more flavor.

Once all the butter has melted place the trout in the oil.

Cook three- to four-minutes on each side. Cooked trout meat will be flaky.

Eric says you do not need a side dish, noting, “You are just eating the trout because they are that good all by themselves.” 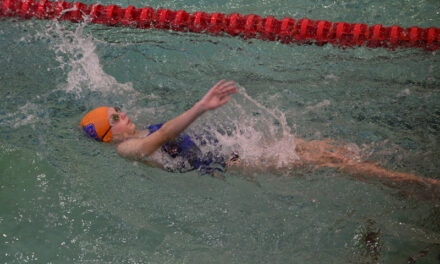