Seen from below, the cupola breaks the shadows cast by the steel overlay created by Belen artist Paula Castillo and installed at the National Hispanic Cultural Center in Albuquerque.
Submitted photo

BELEN — For close to two decades, family picnics, public celebrations and lazy Sundays in the park have taken place in the shadow of art.

Many wonder what the granite boulders balanced atop concrete pillars at Belen’s Eagle Park are all about. From the ground, it might not make sense, but the pillars and boulders — called Aquila (Eagle) — takes its design from the Eagle Constellation.

Erected in 2001, the installation, created by Belen native and artist Paula Castillo, Aquila is part of the New Mexico Art in Public Places program. The constellation, it is said, leads all souls to the salvation of immortality.

Labeled an abstract sculptor, Castillo says her work is very much the opposite of abstract. Made of steel, concrete and stone, it represents the very real concepts of place and time and home.

Much of Castillo’s work echoes the flow and rhythm, while establishing a sense of place and permanence, tapping into the human tendency to see things but not.

Her newest show, set to start on Friday, July, 26, at galleryFRITZ in Santa Fe, is the perfect example. Castillo said when tasked with coming up with a name for the 11-piece show, she was torn.

“I’m thinking ‘Stranger In the Middle of Somewhere … or maybe ‘Nowhere.’ I can’t decide,” Castillo said as she worked on finishing one of the smaller steel pieces for the show.

The final name for the show diverged greatly from her initial ideas, but “That Mountain Over There, Now I See Her,” ties into Castillo’s passion for capturing place and nature.

“As a kid, I drove up and down the valley with my dad,” she said. “One day, I saw Ladron Peak and thought, ‘How could I have not noticed that?’ Sometimes we don’t see the things that are here.”

Growing up, Castillo was surrounded by things that are very much here — scraps of wood and metal, some remnants of projects and others, reclaimed materials from buildings and structures past their lifespan.

“I grew up with a dad who welded,” Castillo laughs when asked what drew her to steel and metal as a medium. “He jokes that he’s the most conservative person you’ll ever meet.”

Belen artist Paula Castillo, a contemporary metal sculptor, uses a wire brush to clean up a piece for her show in Santa Fe that starts later this month.
Julia M. Dendinger | News-Bulletin photos

Leonard Castillo means that in the sense of conservation, she says, reusing, recycling, repurposing anything and everything.

“He taught me how to put things together,” Castillo said.

Starting in the family garage on Rosedale Circle in Belen, with a welder and a will to create.

“With metal, it wasn’t hard to stick things together,” she said. “I just had to learn how to weld.”

Working mostly in steel, Castillo creates pieces that echo the natural world. Often reminiscent of flowers and other fauna, her work bristles with expanses of metallic points, curved and lacy edges, masses of punched metal dots and hard angles.

Castillo said she takes much of her inspiration from the natural world as it intertwines with man-made systems, embedding her work with human issues.

Living in the last house on Rosedale Circle just before the railroad overpass, there was still a small undeveloped field nearby.

Some said there were actual ancient fossils in the field while others said they were merely remnants of modern snails. Regardless, Castillo remembers standing in that field, imagining the concept of infinity beneath her shoe.

“I remember thinking of there being a place that I was the first person to step there and all the things that came before, of lifting up my foot and there being all these layers going back and back,” she said.

While preparing for this summer’s show in Santa Fe, Castillo was finishing up a large public art installation for the National Hispanic Cultural Center in Albuquerque.

Last year, Castillo won the contract for an outdoor art piece at the campus to create a project for the Plaza Mayor that pays tribute to Virginia and Edward Lujan, a couple who were instrumental to the creation to the center.

“They were not only great business people but very connected to their community,” Castillo said of the Lujans. 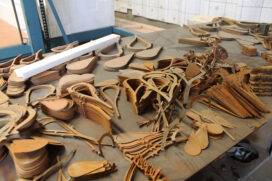 A work in progress at her Belen studio, many of Paula Castillo’s metal sculptures involve hundreds of small pieces, layered together to create a nature-inspired installation.

The large steel piece was installed between the two sets of steps at the center, over an existing open space that has been transformed into a shaded seating area thanks to Castillo’s art. She says she couldn’t have completed the piece without the help of many people up and down the Rio Grande Valley of Valencia County.

“This project was so awesome, but I needed help,” she said.

“I didn’t have a place big enough to work on it, so Craig told me to come there,” she said.

Contemporary artist Paula Castillo says growing up with her dad, Leonard, she learned to weld and reuse found items to create art that reflect…

“The contract was very intense and the work was very precise,” Castillo said. “Tim was key to the project. The box (the steel went over) was not square, so the math and spacial relations was difficult.

“Gilbert transported the piece and it’s not small. He spent four hours strapping it down so it wouldn’t move or bounce on the way.”

“The nice thing about public art projects is you can spread the funding around. Everyone got paid,” Castillo said. “This was a beautiful piece to make together and I’m happy to have all these people embedded in the finished piece.”

According to a September 2018 Albuquerque Journal article, three pieces were installed between the two outdoor staircases of the main building of the NHCC: Una Cúpola Oculta, or hidden dome; La Sentinela; and an argosy bench.

The hidden dome is made of cut steel with a motif iteration of the “tree of life” designed to look like an Easter lily. The sentinela will be cast concrete. The argosy bench will also be cast concrete and able to hold six people.

In addition to being well known for her work in New Mexico, Castillo is also nationally renowned as the only representative from New Mexico included in the National Museum of Women in the Arts’ 2018 exhibition Heavy Metal Women.

She holds a bachelor of science from The University of New Mexico, a master of art in education with distinction honors for her focus on working with diverse populations from the College of Santa Fe and a master of fine arts in 3D studio and contemporary theory from UNM.

Castillo’s upcoming show at galleryFRITZ — That Mountain Over There, Now I See Her — will run from Friday, July 26, to Sunday, Aug. 25. The opening reception is 5-7 p.m., Friday, July 26. 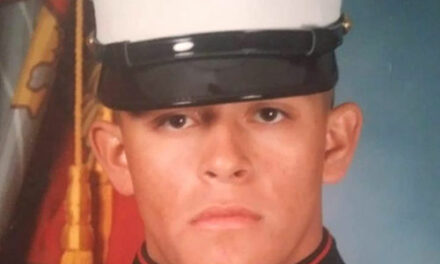 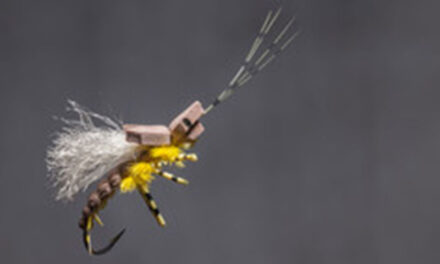 Egging on the White House