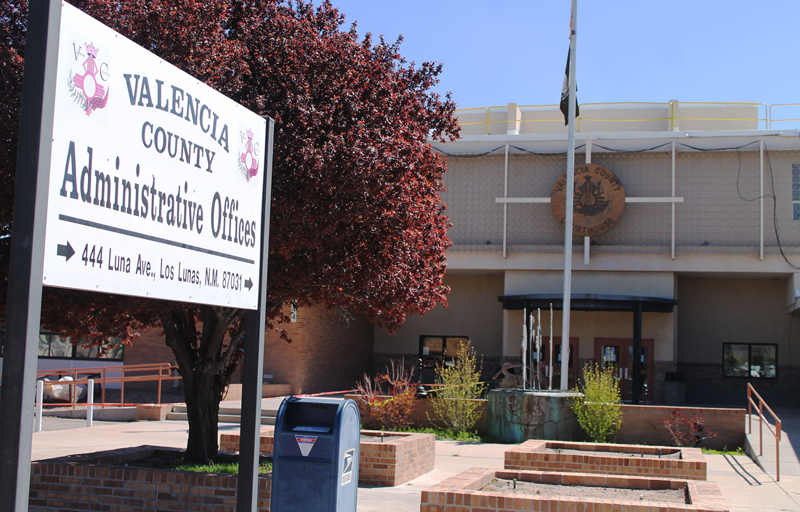 The commission approved the county’s ICIP last month, and after a brief public hearing on Wednesday, Oct. 6, which drew no discussion, amended the plan to make the facility it’s No. 1 priority.

County attorney Dave Pato said Gov. Michelle Lujan Grisham asked the commission to submit an ICIP based on an upcoming feasibility study and projected costs of building a hospital in Valencia County.

Lujan Grisham entered the decade-plus discussion and debate about a county medical facility in late July, when she hosted an invite-only meeting at the Belen Public Library.

While the governor didn’t specify a dollar amount at that time, she did say the county’s needs for improved health care were one of her top priorities for billions in federal COVID-support funds that have recently flowed into the state.

After the meeting at the library, Valencia County Commission Chairman Gerard Saiz reached out to the governor’s office to schedule a follow-up meeting with all five commissioners, but that request was rejected twice, Saiz said during a Sept. 15 commission meeting.

“I was contacted by the governor’s office to schedule a meeting with the governor on the hospital and I was told it could be me and one other person,” Saiz said. “I again asked for all of the commissioners and was once again told ‘no.’”

The chairman told his fellow commissioners at an Aug. 18 meeting he had requested a meeting with all five commissioners and was told no then. All the commissioners expressed their dissatisfaction and frustration at the situation.

“This is a Valencia County issue. We should all be invited,” said Commissioner David Hyder. “It kind of seems like the governor wants to take this out of our hands and solve the problem. It’s not her job — it’s ours.

Ultimately, Saiz and Pato met with governor in late September.

“She expressed deep commitment and wants to support construction of a hospital in accordance with what the voters approved,” Pato said.

Pato said Jane Wishner, the governor’s executive policy advisor for health and human services, asked the county to secure an estimated project cost from KSA, the company performing the feasibility study for the county.

GSF is the total area of enclosed space in a building measured to the exterior walls of a building, even unusable spaces. Net square feet is a building’s usable space.

The estimate calls for eight inpatient beds, an emergency department with 11 examination rooms and one trauma room, plus a pharmacy, lab and other hospital requirements.

The cost is based on the assumption of a 5-acre site, the cost of which was not factored into the $50 million request. The estimate also assumes a warming kitchen for patient meals will be used, with meals delivered to the site from a central location.

The total hard cost of the project — including construction costs, contingencies and inflation — is estimated at $31,271,250, with soft costs of equipment, fees and administrative costs at $18,652,192.

Saiz said the potential award of $50 million for the project creates an interesting scenario.

“The (feasibility) study is still in the draft form. Due to the governor’s interest, the scope of work has changed a bit. Originally, the study was based on the provider being responsible for the capital for the project,” Saiz said. “From our stand point, the governor has committed capital and that could change the outcome of the study.”

Once the feasibility study is finished, the county will issue a request for proposal to find a provider, Saiz said, and the location of the facility will also be left up to the provider.

“The commission is staying as far away from (a location choice) as we can,” he said. “Personally, I feel the decision should be made by the provider.”

While the governor has made a commitment and the county has asked for the funding, the request still has to go through the legislative process next session.

Legislators representing Valencia County will have to advocate for the funding, carry it through the session and then Lujan Grisham has to sign the final capital outlay bill.

Sen. Greg Baca (R-30) said he will advocate for and back up the commission’s request.

“Our legislative team has found its way through some very large projects, like the Jarales overpass and the (Los Lunas) interchange,” Baca said. “We’ll find the money; we’ve found it before.”

The 2022 legislative session is a 30-day session that focuses primarily on the state budget and funding requests, Baca said, so while it may seem short, since it’s a capital outlay request, the county’s new request fits nicely into the purpose of the session.

If the money is successfully awarded to the county through the capital outlay process, anything built using that funding will belong to the county, but there is no intent to operate a health care facility, Pato said.

A county-owned facility would be leased to an operator, he said, and unlike other county buildings, the operator could also be responsible for upkeep and maintenance of the facility.

“The county would have the lease payments and in other counties that own health care facilities, the leases are structured so that the hospital itself is responsible for upkeep and maintenance,” Pato said.

Whether there is an operator interested in the facility is still a question, he said.

“We’ve had our feasibility folks checking with New Mexico providers and operators to see if there is interest,” Pato said. “That’s an essential component. We have to ensure long-term sustainability. We are cautiously optimistic.”

Saiz said the tenor of the meeting with the governor was “very positive. We want to bring advanced health care to the county and put the mill levy money to beneficial use. I hope this will get us there.”

The county has collected $26.6 million from the mill levy that voters passed in 2006 for the facility. The money can only be used for operation and maintenance of a hospital/24-hour emergency health care facility in Valencia County. The tax expired in 2014.