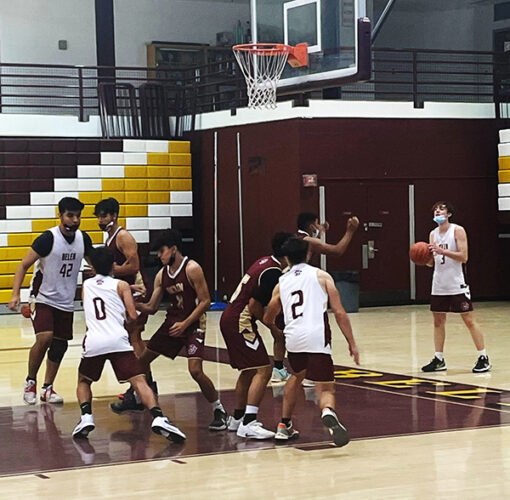 Belen High School boys basketball head coach Donald Marquez is very excited about the group of athletes he has this season.

The Eagles boast three players, all seniors and all listed at 6-foot, 5-inches  or taller. Marquez talks highly of all three.

Standing at 6-foot, 6-inches, Daniel Corrales is the tallest of the three. Marquez said he really likes his game.

“He’s going to be a load to handle down low for teams,” Marquez said of Corrales. “He can shoot from the outside, too.”

Corrales is recovering from a knee injury suffered early on in fall semester.

“He isn’t all the way trustworthy of his knee right now, but once he does get more comfortable, he will return to his old-self of working hard for us,” the coach said.

Dalton Bland is, what  Marquez says, the team’s most versatile player.

“Dalton is good,”  Marquez said of Bland. “He can guard just about anyone and he can play on offense just as good as anyone. He loves to play and is always working hard.”

Brody Jaquez just finished up his football season and is now joining up with the team. Marquez is fond of Jaquez’s physical play.

“He can get in there and move some guys around,” Marquez said of Jaquez’s game. “I think, with him, and our other forwards, we’re going to be tough.”

Marquez isn’t just dishing out praise for his big men in the post. He is excited about his guard play, too.

“Our guards are fast,” Marquez said of his back court. “I think our speed is going to surprise a lot of people this season. People may look at them and think, ‘Hey these guys don’t look fast,’ but then they’ll get on to the court and they’ll be surprised.”

Belen opened up their season on Nov. 23, against Sandia Prep. The Eagles’ first home contest is Tuesday, Nov. 30, against Manzano.

Other key games on their schedule include a visit to 2020 State 4A Champions Del Norte on Dec. 16, and their in-district contests with Valencia on Jan. 18 and Feb. 4.

“We have a good core group,” Julian said about his players. “The kids have been working hard in practice, and we’re looking forward to getting on the court.”

The Tigers have five seniors on their roster, all back from a 2020-21 team that made the 5A State Tournament.

Julian says the key games for his team this season will be the in district contests.

“Our district is going to be tough,” Julian said when asked about his schedule. “All of 5A is tough, so district play is the key part of our schedule.”

Los Lunas opens its season on Friday, Nov. 26, with a home game against Farmington.

Other notable contests include a rematch from last season’s playoff game with Las Cruces on Dec. 14, and a visit from Valencia on Dec. 17.

The Valencia Jaguars will be breaking in a new coach for this season, as Jesse Hathoot takes over the reins after spending 16 of the last 18 years in the LLHS program as either a player or an assistant coach.

“We have a lot of youth and inexperience,” Hathoot said of his team, “but I love their work ethic. We can definitely be competitive this season.”

Valencia is coming off last season in which the team only won three games, so there is nowhere to go but up for coach Hathoot.

“We feel like we can build this program,” Hathoot said. “With only three wins last year, we feel we can do better than that and give other teams competition.”

Hathoot also thinks the key games for his Jags will be in-district games.

“We should know a lot about our team by in-district play,” Hathoot said. “We feel like once we get in-district anything can happen.”

Valencia returns Fernando Enriquez and Ali Abdullah, two players with the most experience on the roster.

“With Fernando, he is highly skilled and is a good defender,” Hathoot said. “With Ali, he’s a hard worker. He’s a first-in-the-gym, last-to-leave kind of player. I have been impressed with his work ethic.”

Valencia opens its season on Nov. 27 against Kirtland Central at VHS.

21 teams to compete at Socorro Invitational