LOS LUNAS — Naithan Gurule always wanted to either be a police officer or a school teacher.

As he prepares to turn in his badge on Friday after 20 years of service as a police officer, and retiring as chief of police in Los Lunas, Gurule’s dream of making an impact in the lives of youth is soon to become a reality.

Los Lunas Police Chief Naithan Gurule is retiring after 20 years of service. His last day on the job will be Friday, Jan. 28.

Retiring at the young age of 41, Gurule is taking the opportunity to start a second career as a teacher. He’s in the middle of the hiring process with Los Lunas Schools, and is excited to soon step into a classroom at Los Lunas High School.

“I first started (with LLPD) in July 2002,” Gurule said. “There were always two things I was always interested in — I wanted to be a police officer, and a teacher and a coach.”

Gurule, who grew up and went to school in Los Lunas, said when he was 21, he saw an advertisement in the News-Bulletin to test for the Los Lunas Police Department. He signed up, tested and was eventually hired.

“My uncle and aunt were both police officers, and that played a major factor of why I wanted to be a police officer,” he said. “It just seemed very exciting, very interesting. It seemed to be a leadership-type role in the community, and that’s what drew me in.”

When he began his career as a patrol officer, he remembers the experience was better than he ever expected it to be.

“I remember learning about certain drugs,” Gurule recalls. “Meth — I had never even heard of meth before that. I didn’t know anything about heroin, or the wild and crazy things that went on in this town. I was kind of naive about a lot of it.”

His main objective though was to help his community and make a difference. He knew a lot of people and, at first, didn’t know if that would impact his ability to do his job. Needless to say, it didn’t, and it has actually helped.

Police work, Gurule said, has changed quite a bit since he first began 20 years ago. At the time, community policing wasn’t a priority but, over time, he realized it’s an advantage for both the department and community.

“It’s a huge benefit for me to do my job, to have those community relationships and connections,” he said. “People weren’t willing to talk to officers they didn’t really know. It’s probably one of the most important things for an officer to be from the community.”

Other changes Gurule remembers is he used to have to handwrite all his reports, and officers had to purchase their own department-approved rifles. At the time, most officers also bought their own handguns.

Technology has also improved since Gurule first joined the department, which, he says, has helped officers do their jobs more efficiently.

As he counts the days until he has to say goodbye to his second family on the force, Gurule reflects on his career with the Los Lunas Police Department, including his promotions along the way.

In 2006, Gurule was transferred into the traffic division, handling crash investigations and received advanced training in crash reconstruction. Three years later in 2009, he was promoted to sergeant and transferred to the investigations division and became a detective.

A year later, in 2010, he was once again promoted, this time to lieutenant, and was put in charge of professional standards, and was successful in helping the department becoming accredited.

In 2014, when Los Lunas Mayor Charles Griego was elected to office, he handpicked Gurule to become the village’s top cop. Gurule is both grateful and honored for the opportunity, saying when he first joined the force, he never thought it would be a possibility.

“In the beginning, I thought I’d never work day shift. I thought I’d be working the night shift forever,” Gurule says with a chuckle. “It was so much fun; there was no traffic.”

It was years later when he was promoted to lieutenant that he made new goals for himself, including one day becoming chief. Gurule’s other goal was to finish his education.

“I went back to school and got my bachelor’s degree in criminal justice, and I was able to go to the FBI Academy,” he said. “I was able to get into another school, Northwestern University’s School of Police Staff and Command, which was very challenging.” 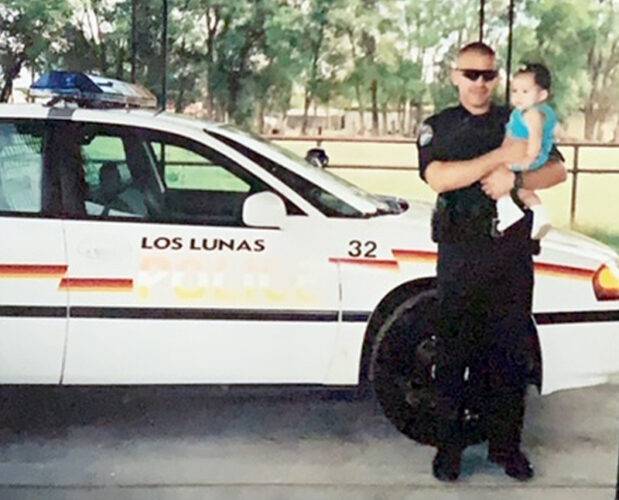 Submitted photo
Los Lunas Police Chief Naithan Gurule as a rookie 20 years ago, with his oldest daughter, Emma, who is now 19.

When he became chief nearly eight years ago, he remembers he wanted to further his education and he eventually earned his master’s degree in criminal justice, all while raising six children (daughters, Emma and Ella; and sons, Naithan, Noah, Nava and Emmett) with his wife, Carolina.

“I wanted it for myself. I had a lot of training and experience, but I wanted to make sure I was educated enough to hold the position,” he said. “I also wanted it to become normal within my own family, for my kids to get a college degree. If they decided to do something after that, it’s up to them, but they’ll always have that to fall back on.”

Gurule said he also wanted to provide an example to officers of what is attainable while working for the Los Lunas Police Department.

In the 20 years Gurule has been with the department, he has many memories to look back on with pride. While “working the streets” was the most fun and exciting, although dangerous, he fondly remembers those moments when he was able to make a positive impact on his community.

“We really made a push to go to the different school sites,” he said. “We would go to Los Lunas Elementary, for example, to play kickball. We ended up playing volleyball because they wanted to challenge police officers. Being in the schools was a blast.”

Not only is Gurule grateful for the time he’s had with the Los Lunas Police Department, but for those who have helped him along the way, including retired police chief Nick Balido and captain Nancy McClanahan.

“They gave me an opportunity to be successful,” Gurule said. “I felt like they believed in me and even up to the point when I was appointed chief. They contacted me and they were very happy for me.”

Now that Gurule prepares to conclude his role as police chief, he leaves behind a few words of advice to the younger officers.

“Listen to the officers who have been here, and you need to get out and make community contacts,” the police chief said. “Talk to people; get to know people. It’s very important that (the community) feel comfortable in meeting you or calling you.”

In his time as the top cop in Los Lunas, Gurule is confident he’s been able to improve the trust and communication with the community and the department. He said he has always had a good work ethic, and has made sure to be open and honest.

“I feel a little guilty leaving,” Gurule said. “I just feel I have a huge responsibility to the community. As chief, there’s a lot of pressure — not from the governing body but from myself. I just want to make sure it’s done 100 percent right.”

While he might feel a little guilty, he’s also grateful for the support from the community, and is encouraged the new chief, Frank Lucero, will be successful.

“He has a lot of experience; he went to school here and he has a lot of community contacts,” Gurule says of his successor. “He’s very understanding and compassionate, and I feel very thankful and comfortable to leave the department in his hands.” 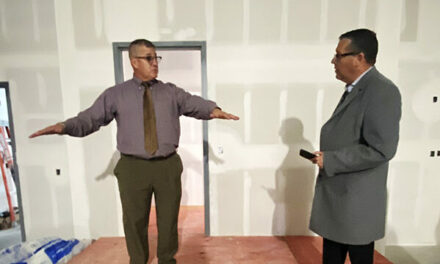