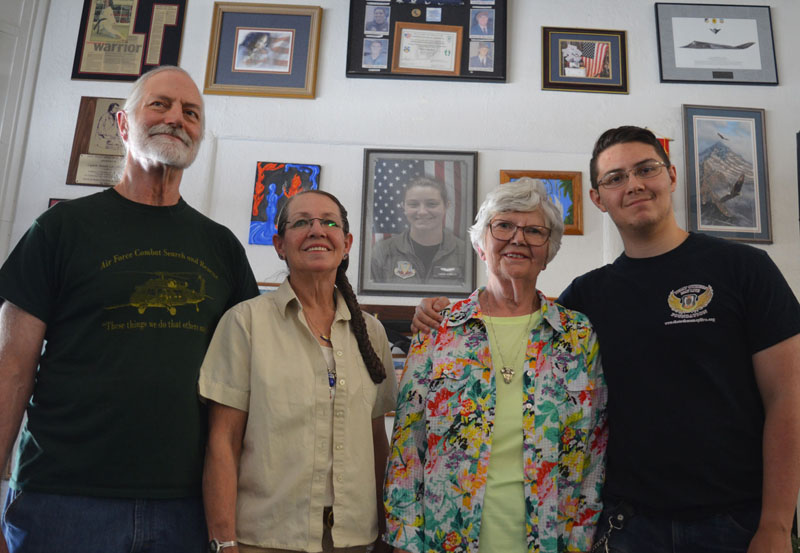 BELEN — It’s been 16 years since Air Force Capt. Tamara Long-Archuleta sacrificed her life for her country while she and her crew with the Komodo II Crew attempted to rescue two young children in the war-torn country of Afghanistan.

She was only 23 years old when she perished, and nearly two decades later, her family still beams with pride as they share memories of Tammy and her accomplishments.

Today, her family, including her parents, Richard and Cindy Long, and her son, Donnie, are on their way to Washington, D.C., to meet President Donald Trump and First Lady Melania Trump at the White House as they honor Gold Star Families on Friday evening.

When Richard received the phone call about two months ago from Becky Christmas, the president of the American Gold Star Mothers, about the reception in the nation’s capital, he initially didn’t think much of it. 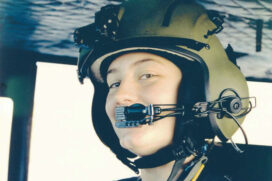 One of the most famous photos of Tamara Long-Archuleta is this one of her wearing her pilot helmet. Artist and veteran Michael Reagan used this photo to create a portrait, which now hangs in the Belen Goju Ryu Karate school.
Submitted photo

“She calls and wanted to know if we wanted to go to a White House reception honoring Gold Star Families, and I was like, ‘I’ll get back to you,’” Richard said. “I’m not a big traveler, and I was thinking I have things to do. I’m not a real excitable boy in general.”

But as soon as he got off the phone, Cindy informed him that they were “definitely” going. He called Christmas right back and confirmed their attendance.

“Not only are we honoring our daughter, but we’re honoring all of those who paid the ultimate sacrifice for our country, so we want to serve all of them well,” Cindy said. “To have that honor to represent our daughter is really amazing.” 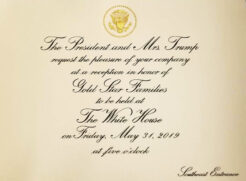 As a member of the Gold Star Mothers, Cindy Long received an invitation to meet the president of the United States and first lady on Friday, May 31. She, along with her husband, Richard, and their grandson, Donnie, will also attend the event.
Submitted photo

Cindy remembers when Tammy was a small child she was always interested in politics. In an award-winning essay, Tammy wrote she could see herself one day being president of the United States. She received a Bachelor of Science in Political Science in 1999 from the University of New Mexico at age 20.

“I could see her up there smiling, knowing we’re going to the White House,” Cindy said of her daughter.

“She loved the law and wanted to be a JAG officer and go into international law,” Richard said. “But she also loved to fly. She had been in flight school since she was 15, and decided she could be a lawyer later.”

Donnie was just about to turn 4 years old when his mother perished in a helicopter in Afghanistan during Operation Enduring Freedom. Tammy was a third-degree black belt.

While Tammy has been honored at various venues since her death in 2003, both Richard and Cindy, who will celebrate 47 years of marriage this year, say the invitation to the White House has to be the highest honor.

A bench at Eagle Park in Belen bears Tammy’s name; there’s a large stone memorial at The UNM-Valencia campus, where she was valedictorian in 1997; there are two landing zones named for the hometown hero — one at the Girl Scout Camp in Cuba, N.M., and another at Moody Air Force Base in Valdosta, Ga., where she was stationed before being sent to Afghanistan.

The landing zone in Georgia, Richard says, is only used to practice hovering because there’s a pond there with an alligator in it and they don’t want to land there.

“Their public affairs officer called us on the anniversary of her death and said they always talk about Tammy and the Komodo II Crew and the crash,” he said. “They use it as a lesson to learn. But he told us that he thinks that alligator is Tammy, just daring people to land at her landing zone.”

Donnie, who was only 3 years old when she died, grew up with his father and spent summers and holidays in Adelino with his grandparents. He doesn’t remember his mother, but he is still proud of who she was. He’s also excited to meet the Trumps.

“I think it’s going to be a really cool experience,” Donnie said of their upcoming visit to the White House. “It’s always good to honor anyone who died for this country; it just so happens to be my mom this time.” 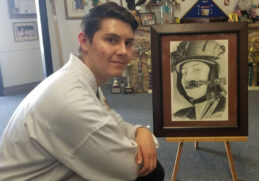 Donnie Archuleta poses by a portrait of his mother, Capt. Tamara Long-Archuleta, created by Michael Reagan, who has completed more than 6,000 portraits for his Fallen hero Portrait Project.
Clara Garcia | News-Bulletin photo

Over the years, Donnie’s family has shared memories, videos and photos of his mother with him — showing him how she lived, how she loved and how she gave everything she had to everything she did.

On March 23, 2003, Capt. Tamara Long-Archuleta, who was assigned to the 41st Rescue Squadron, was co-pilot on a mission to rescue two injured Afghani children. It was a dark and stormy night at 9,000 feet when a tragic accident during a refuel operation occurred, killing all six crew members.

The Longs had heard about the crash on the news, but never thought their daughter was involved. Cindy had received an email from Tammy the day prior, saying she had been involved in a successful rescue operation that day.

Tammy was active in Girl Scouts growing up. She is seen here as a young girl in her Brownie uniform.

Cindy will never forget that earth-shattering day when two Air Force airmen knocked on the door of the family home informing them of the fate of their first born.

Richard, on the other hand, can’t and won’t talk about that day. It’s too personal — too hard — for him to talk about how he felt that day.

“I remember every detail,” he said as his eyes filled up with tears.

When Tammy died, Cindy felt the peace of God that passed through her the day after she lost her only daughter.

“It is just so amazing that if you lean to Him, He will give you what you’re needing,” Cindy said. “I have the faith of a mustard seed that God is in control. I may not agree with His timing — no — but I know He sees the bigger picture and I have trust in Him.”

Tammy would have been 40 years old this year; she was born on May 12, 1979 — Mother’s Day of that year. Cindy said it just so happened that it landed on Mother’s Day again this year.

Richard, on the other hand, was very angry when his daughter died, but soon realized he had to practice what he preached, so to speak.

“We teach karate — we teach to obtain true proficiency in the art of karate, no one must control the mind and conquer thyself,” he said. “That’s simply what we have to do.”

Richard says a woman who had lost a child a long time ago once said scars are fresh and they hurt a lot, and then they heal, but there’s always a scar and it doesn’t go away. 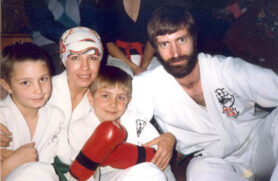 Tammy grew up in a household filled with love and support, and in the Belen Goju Ryu Karate school her parents own and operation. Pictured, from left, are Tammy, her mother, Cindy, her brother, Michael, and her father, Richard.
Submitted photo

“But you get stronger — you have to,” he said. “If not, it can kill you and it can be devastating. We can’t allow grief to stop you to do the things that need to be done. It doesn’t honor those who are gone. You honor those who pass with how you live.”

While others have honored Tammy in their own way, her parents have done one thing — created the annual Capt. Tamara Long-Archuleta Memorial Open Karate Championships held every October. The proceeds from the tournament, which has exceeded $30,000 since 2005, goes toward scholarships.

Rebecca Long, Tammy’s grandmother, dealt with her death in a different way. She too has experienced the death of a child, her son. When Tammy was born, she says, it helped her deal with her grief.

She recalls her late husband, Bud, had spoiled Tammy since she was only 6 weeks old, taking her into a toy store in Albuquerque to buy her her first toy.

But when Tammy died, the grief returned. 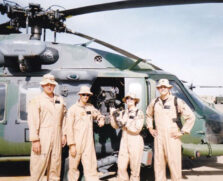 Tamara Long-Archuleta was killed during a rescue mission in Afghanistan on March 23, 2003. She is pictured, second from right, the same morning with her fellow crew members.
Submitted photo

“It was really tough,” Rebecca said of Tammy’s death. “For about three years, I just kept crying. I knew what (Richard and Cindy) were going through, and it hurt that it was a double whammy. It’s such a personal thing, and you have to deal with it on your own.”

Growing up without a mom, Donnie says, was “weird,” and it was even “weirder” having no memories of her and everyone else talking about her.

“I wasn’t angry and I wasn’t really sad,” said Donnie, 20, who now lives in Adelino with his grandparents. “How can you miss someone you can’t remember. Yes, it would have been better to have her growing up, and yes, I’m proud of her.”

After Tammy’s death, it seemed as if the whole community wrapped their arms around the Longs, showing them support and love during their time of grief.

“She wanted to do what she was doing,” Richard said of his daughter. “She was doing what she wanted to do and fulfilling her dreams and desires — not all of them, obviously, because she didn’t last that long. A lot of people live long lives and don’t do half of what she accomplished.”

“She instigated a lot of love in the world,” Rebecca said. 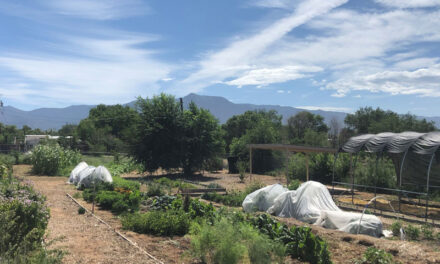