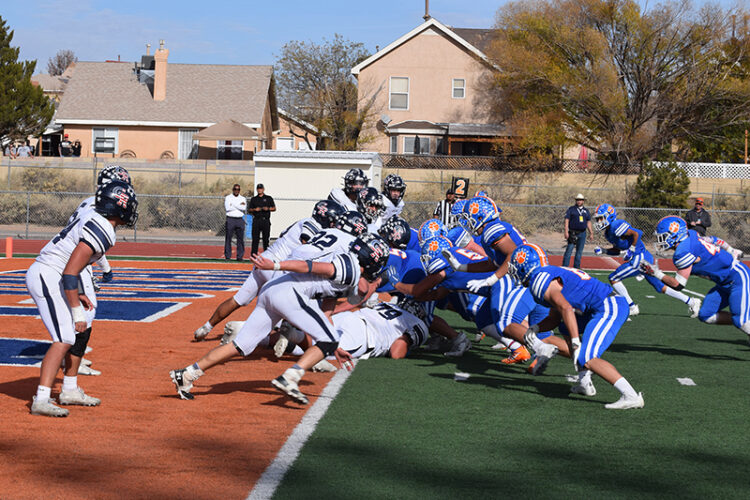 Adam Evarts | News-Bulletin photo
Los Lunas’ offense tries to push Goddard back during Saturday’s game. The Tigers defeated the Rockets by a score of 26-21, which makes it possible for the Tigers to compete in the 5A State Championship game against the Artesia Bulldogs on Saturday.

A touchdown pass from quarterback Paul Cieremans to receiver Fabian Trujillo with two minutes to play in the Nov. 20 semifinal game proved to be the deciding points in Los Lunas’ 26-21 win over Goddard.

“We knew it was going to be a dog fight,” Los Lunas head coach Greg Henington said after the game. “We could’ve folded at one point, but the guys decided not to and that says more about this team than anything.”

Early on, it appeared as though Goddard would run away with the game.

After forcing the Tigers to punt on their first offensive possession, the Rockets took over at their own 45-yard line.

On the very first play of Goddard’s drive, running back Jon Silva took a handoff and raced 55-yards past the Tiger defense for a touchdown to put the Rockets up 7-0.

Following another Los Lunas punt, Goddard drove into Tiger territory before misfortune struck by way of a fumble from quarterback Adrian Vega.

Los Lunas would recover, but just two plays later the Tigers would fumble it right back to the Rockets.

Goddard’s next drive would extend into the second quarter and would culminate in a 35-yard touchdown pass to put the Rockets ahead 14-0.

Los Lunas would take their next drive deep into Goddard’s territory with Cieremans doing much of the work with his legs.

On play No. 11 of the drive it was Keven Munoz taking it into the endzone from 1-yard out to cut the lead to 14-7.

It took the very next Goddard drive for the Rockets to respond to the Tigers touchdown.

After a steady drive into Los Lunas territory, Goddard got into the endzone again courtesy of Jon Silva.

This time Silva scampered 31 yards for a touchdown to put Goddard up 21-7 as the game approached halftime.

With 11 seconds to play in the first half, LLHS moved just over the 50-yard line into Goddard territory, when Cieremans found Emilio Mora III on a pass play that ended at the Goddard 14-yard line. The Tigers lined up to spike the ball, but the officials said that halftime had hit before the spike had occurred.

That drew the ire of the home crowd as the officials were showered with boos from the home faithful as the two schools walked to the locker room with Goddard up 21-7.

The second half proved to be much better for the Los Lunas Tigers.

Goddard opened the second half with the ball and moved into Los Lunas’ side of the field.

The Tigers’ defense stiffened and forced a Goddard fourth down attempt from the Los Lunas 45-yard line, which the Tigers stopped Goddard right at the line to take over on downs.

On the ensuing Los Lunas drive, Cieremans took over.

The LLHS quarterback ran the ball himself on every play of the drive, including the 9-yard touchdown that ended the drive for Los Lunas and got them to 21-14 in the third quarter.

The score remained 21-14 in to the fourth quarter when the Tigers’ defense rose to the occasion again.

Goddard once again drove to the Los Lunas 45-yard line, but the LLHS defense turned the Rockets away on fourth down. 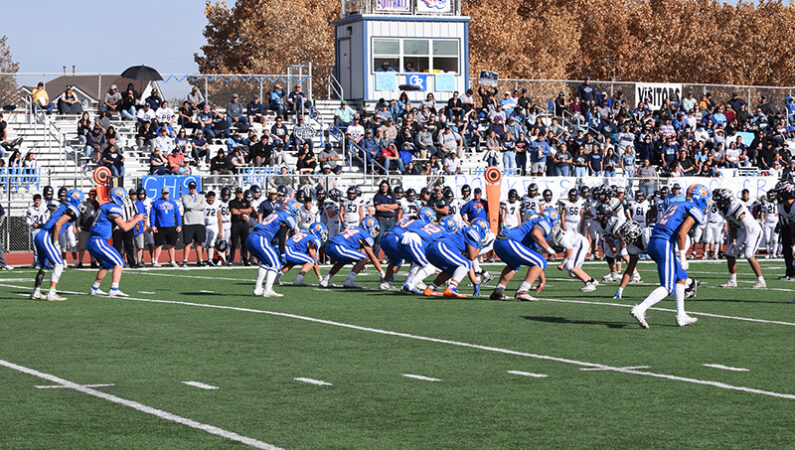 LLHS quarterback Paul Cieremans awaits the snap during the Tigers game versus Goddard.

After another long Cieremans run, Karlos Cieremans got the ball to the Goddard 4-yard line, with Paul Cieremans finishing the drive with a 4-yard touchdown plunge.

Los Lunas then sent in their kicking team for the extra point, but lined up first in a normal offensive play scheme. That’s when Goddard had left a receiver open.

Rather than kick the extra point, the ball was snapped and thrown to the open receiver, but the pass fell short, leaving the score at 21-20 with seven minutes to play.

The Los Lunas defense would force a Goddard punt on the Rockets’ next drive.

Following the punt, Los Lunas had it at their own 38-yard line when Paul Cieremans would once again put the offense on his shoulders.

Cieremans carried the ball on five consecutive plays to get the ball to the Goddard 28-yard line. Following an incompletion, Cieremans covered the rest of the yardage needed with his arm.

Rolling to his right, Cieremans saw Trujillo with a step ahead of the Goddard defensive back covering him. With a whip of his arm, Cieremans connected with Trujillo in the corner of the endzone to give LLHS the lead at 26-21.

It would stay that way after Cieremans pass on the 2-point conversion fell incomplete.

Goddard would get the ball back at their own 20 with two minutes to go and a chance to drive for the win.

The Tigers weren’t going to let that happen and after forcing a fourth down at the Rockets 27-yard line, LLHS stopped Goddard’s Silva shy of the first down to take over.

From there, Cieremans ran for one first down and the Tigers were able to run out the clock for the 26-21 win.

Tiger defensive lineman Mikkel Beltran broke his leg in the game Saturday, but Henington said he’s rooting on his teammates.

“He’s in good spirits considering the situation,” the coach said. “He came by practice to see the team.”

The victory sends Los Lunas to the 5A State Championship game against Artesia and coach Jeremy Maupin, who left the Tigers’ head coaching position last year.

The game will be held at Willie Chavez Field in Los Lunas with a 1 p.m., kickoff, Saturday, Nov. 27. 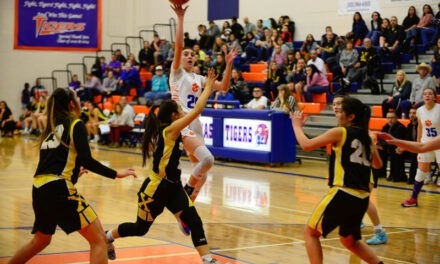