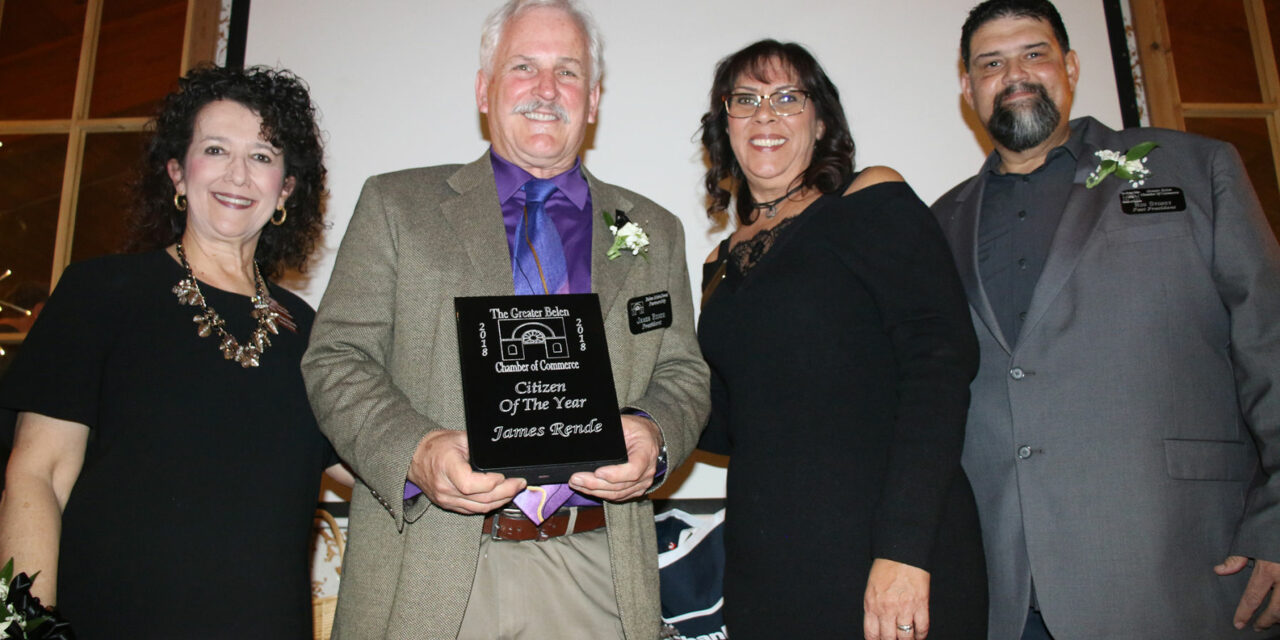 BELEN—There were a lot of smiling faces and embraces at the Greater Belen Chamber of Commerce annual Board Installation and Awards Gala on Saturday.

The Sheriff’s Posse Cafe was decked out in white linen for the affair, where praise and pride in Belen’s business community proliferated among the packed house.

James E. Rende, co-designer of the Veterans Memorial at Eagle Park and designer of the new Belen flag, was chosen as the chamber’s 2018 Citizen of the Year.

Part of the criteria for being chosen is a person or family that is a contributor and a volunteer to the community who receives no pay. Rende’s enthusiasm for the Hub City is almost palpable, said Norm McDonald, the master of ceremonies.

“I honestly had no idea,” Rende said of receiving the award. “I’m humbled by this — I would think, ‘Who can even receive this?’ I think those people are so special that to be honored in this way is just amazing.”

Rende, a San Francisco native who moved to Belen in 2008 with his wife, Margie, said he has lived in a lot of beautiful places, including Hawaii, Germany and his native city, but Belen is just as beautiful and he loves living in the Hub City.

Rende attended the School of Architecture at the University of New Mexico and helped redesign the old state penitentiary in Santa Fe.

After he retired, he looked for ways to help beautify the Hub City and started by picking up trash in the parking lot of the Belen Harvey House Museum, where he also volunteered.

“The real reason I did the Harvey House project was so that the community could see it doesn’t matter where you are, what you do, what your background is — there are so many things you can do that you don’t need exotic credentials to do. Just get in there and do it,” McDonald quoted Rende.

“I’m humbled by this (award) and honored,” Rende said. “Thank you very much.”

Rende has been called the Hub City’s “Johnny Appleseed,” because he plants seeds of renewal in Belen.

He is also involved with the Belen MainStreet Partnership due to his wife, Margie’s former shop, ANEW on Main.

The Belen MainStreet Partnership was chosen as the 2018 Service Organization of the Year, and as a member of the board, Rende accepted the award for the non profit.

“Thank you for what you do,” he said to the members of the organization. “It’s just amazing the people who are involved, people like Rhona (Espinoza) here. She draws so many of us to work with this organization just because of her energy about the city of Belen.” 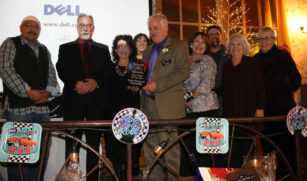 Through the years, the partnership’s list of completed projects, grants and events has grown. Recently, it received an $80,000 Great Blocks on MainStreet grant for a shovel-ready construction project for three blocks in the downtown Becker and First Street area.

Other projects recently completed include a façade makeover and electricity at the old City Hall building.

The non profit is a nationally accredited MainStreet program and was organized in 2009 by Ronnie Torres.

The partnership is under the New Mexico MainStreet program through the state Economic Development Department, but until 2013, the partnership was in start-up mode.

Belen Mayor Jerah Cordova, president of the nonprofit at the time, approached the executive director of the chamber, Rhona Espinoza, about going through the national certification to become the Belen MainStreet Partnership’s executive director. The chamber saw this as an opportunity to have a vital economic development arm of the chamber.

Accreditation of the Belen MainStreet Partnership allows the organization to receive professional training, technical assistance to businesses such as storefront design, landscaping, pop up events, signage, marketing, event planning, board training and development through both the state and national MainStreet programs.

The chamber’s 2018 Member of the Year is the State Employees Credit Union. 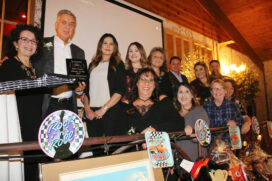 When the SECU opened its doors 60 years ago, its purpose was to help its members feel confident and secure about their finances and more than that, to build futures together. The SECU is a productive part of the economic vitality of the Belen community and is a tireless proponent of community service and volunteerism, demonstrating its commitment to the Belen community.

The chamber’s Infinity Award was given to New Mexico Travertine Inc., and owners Jim Larder and family.

“The Infinity Award is given to the business which has continued as a viable, productive part of the economic vitality in the Belen community,” said McDonald. “Traditionally, the award has gone to family-owned businesses, but is not restricted to that criterion. It can be one that carries either a family history or has maintained the same name for the entire years of existence.” 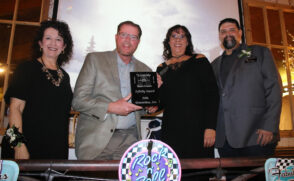 “On behalf of the Lardner family, I would just like to say thank you,” said Jim Lardner. “Our philosophy in our family is, to much is given, much is expected. We love the city of Belen, we love the chamber and we’re big fans of doing whatever we can to promote Belen and the surrounding area.”

The Amigo Award is presented to an individual or business that has become recognized throughout the state and nation as presenting a positive, friendly image of Belen and Valencia County, and was given to Lori’s Boardwalk Gymnastics.

The family-owned business offers classes in gymnastics, cheer leading, dance, trampoline, fitness, rock climbing and more, plus provides performances for birthday parties and private events. They host events such as Monopoly Gymnastics and Gymnastics State Championships, and have taught more than 25,000 athletes. Lori’s Boardwalk Gymnastics recently bought a new building at the north end of Belen. 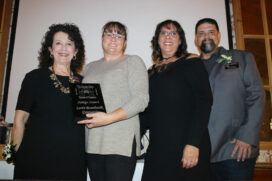 Lori’s Boardwalk Gymnastics received the Amigo Award from the Greater Belen Chamber of Commerce. Owner Lori Kapalko could not attend the event so, Melissa Madrid, second from left, accepted the award for her. Also pictured are Rhona Espinoza, Anna Duran and Rod Storey.

Lori Kapalko was at a competition and was unable to attend the event to accept her award in person, so Melissa Madrid accepted it for her.

“Boardwalk Gymnastics is very honored to receive this award,” Madrid said. “They would like to thank everyone, including the Greater Belen Chamber of Commerce for supporting Boardwalk over the past 24 years.” 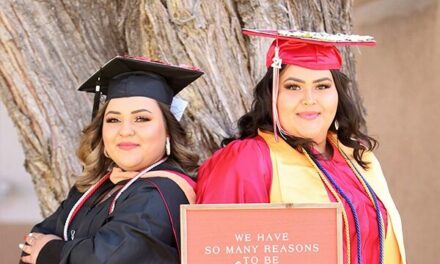 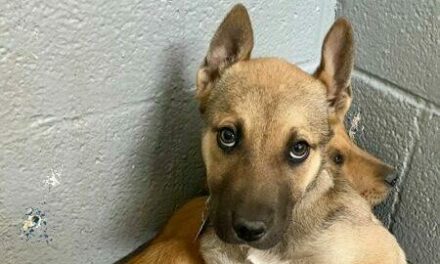