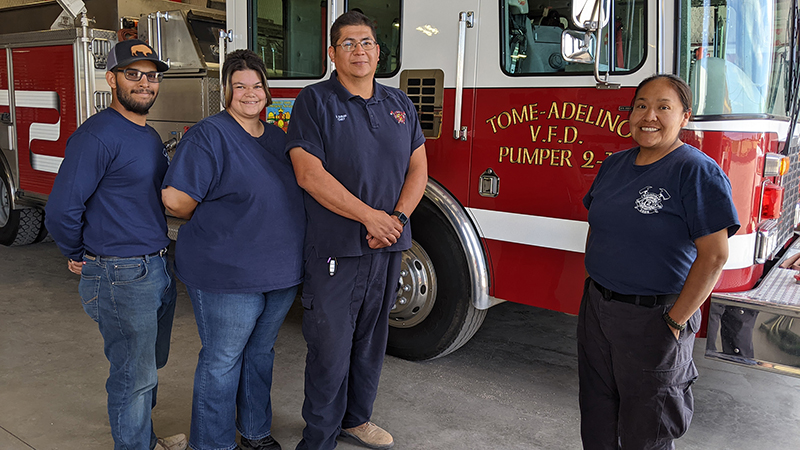 Although the two large wildfires that scorched Valencia County in May have been extinguished and the annual monsoon season has soaked the county, the chance for additional bosque and wildfires is always on the horizon.

To help protect the community, the Valencia County Fire Department held open houses at three stations recently to advise people how to best protect before and during a fire.

Chief Matthew Duran, Tomé/Adelino District chief, said the first step homeowners can take to protect their property is to create defensible space around their home and other buildings on the property.

“Ideally, they need to clear out anything that would burn,” Duran said. “Keeping the grasses trimmed, anything that might combust, keep it away from the property.”

The “Ready, Set, Go!” guide, prepared by the International Association of Fire Chiefs, describes three zones of defensible space. The first is zero to five feet around your home, or to the property line, depending on the size of the property. Noncombustible surfaces such as concrete or rock mulch immediately around a home is a good first line of defense, along with roofs and gutters free of dead leaves and debris.

Move stacked firewood and other flammable materials away from your home, garage or attached deck, as well as prune branching that touch or overhang any structures. Loose or missing roofing materials should be replaced to prevent ember penetration.

Rhoda Riley, a volunteer firefighter with the Tomé/Adelino District, said people underestimate embers, noting how far they travel depends on a variety of conditions such as the size of the fire, wind and weather conditions.

“These little embers fly and if you have shingles, that’s going to catch right away,” Riley said. “People driving around looking at the fire may not realize it but embers can fly in through an open window and cause a fire in the vehicle. They can also fall on a person and catch their clothing on fire.”

According to the guide, embers can be carried more than a mile by the wind, and research points to embers and small flames as the main ways homes ignite in wildland fires.

The second and third defensible space zones are from five to 30 feet around your home and then 30 to 200 feet. Trailers, recreational vehicles, storage sheds and other combustible structures should be moved out of the second zone if possible. If they cannot be moved, a defensible space should be made as if they were part of the home.

In zone 2, so called “ladder fuels” should be removed to create separation between low vegetation and tree canopies to keep fire from climbing. In zone 3, there should be space between your property and your neighbors; trees on your property could post a greater risk to your neighbor’s home than yours.

If a wildfire is in your vicinity, Duran advised homeowners can put a sprinkler on their roof to protect from airborne embers, as wet down decks and other outdoor structures.

While homeowners can do many things to protect their property, sometimes the situation becomes too dangerous and they must evacuate.

“Take only things that are absolutely necessary. This is not the time to pack up your sofa,” Riley said. “Vital documents and valuables that can’t be replaced, small things.” She advised gathering up prescription medications and putting them in a single container that can be accessed but is easy to pick up and leave with.

Other important items to take during an evacuation include credit and debit cards, baby supplies such as formula and diapers, flashlights, batteries and extra car keys.

“If you can, have printed maps of various evacuation routes in case internet and cell phone service is disrupted,” the firefighter said. “Have a fire evacuation for your house. If the fire is coming from one side, where’s everybody going to go?”

She also said if you do evacuate a home, leave the lights on so firefighters can see it through the smoke.

Just having a large, intense fire in the vicinity can be dangerous even if it never directly touches a home, Riley said.

If it gets close enough to homes, the radiant heat from the blaze can cause things inside a home to catch on fire, such as curtains and other flammable window coverings, and easily ignitable objects against walls.

“I learned that on (the Big Hole Fire),” Riley said.

Prior to evacuation, homeowners might want to push combustible items toward the center of rooms, away from exterior walls, if there is time to safely do so, she said.

If you find yourself near a blaze or one is approaching your home, Ridley said to be sure to wear long sleeves and pants to limit skin exposure, and to make sure you have a face covering of some kind to breath through.

Duran said community members should also remember that their local fire department is a resource even before an emergency or disaster.

“We have personnel here who are always willing to do an assessment, to go out to your property and give advice and provide a little one-on-one time with our residents,” the chief said.

If you have to evacuate due to a wildfire or any other emergency, remember the 8 P’s: 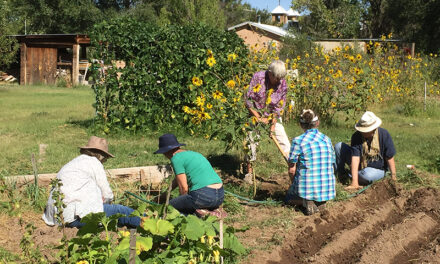